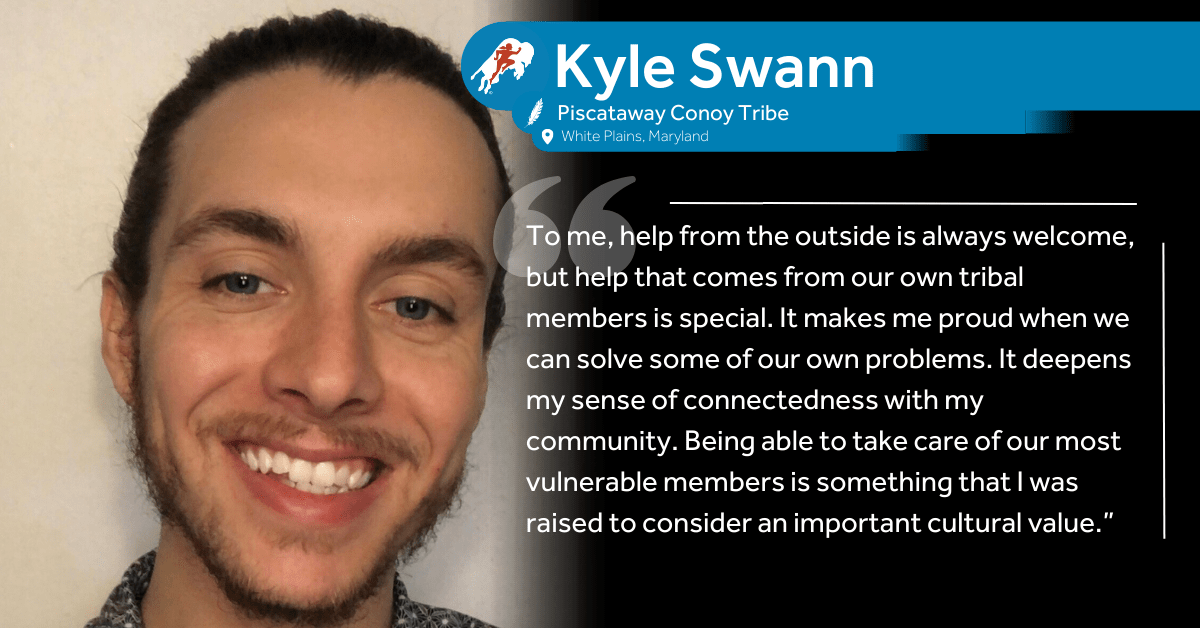 “I will use this feedback to connect tribal members in need to others who may be able to assist them and give our tribal chief the information he needs to be serve and advocate for our people,” says Kyle. In addition, the detailed demographics he collects will enable the tribe to apply for grants and other opportunities that require such information – such as recognition from the federal government.

“Through my interviews, I hope to identify and reach out to some of the estimated additional 35,000 people who would be eligible for tribal enrollment,” he added. “I hope to have conversations with them in which I can answer their questions about enrolling, their history and their cultural traditions.” Specifically, Kyle’s dream is to create an accurate, point-in-time snapshot of all the people who belong to the tribe, as well as “as many people as possible who could belong if they chose to.” Kyle notes that most people who live in southern Maryland and Washington, DC, have heard of the tribe. “In fact, people all over the U.S. who are interested in colonial history know the name ‘Piscataway.’ Unfortunately, this hasn’t necessarily translated into an understanding of who we are today.”

He explained that part of the challenge is that some of the tribal members live throughout the country, and even those who live locally aren’t all active in meetings, ceremonies and other events. “As a result, we ourselves don’t have a full understanding of who ‘we’ are. I thought of the idea of surveying enrolled tribal members because it’s knowledge that we all seek in order to better define our tribal identity.” Recently, several homeless tribal members asked the tribal chief for help in securing affordable housing, he told us in his Dreamstarter application.

“I thought back on my idea of a population census and wondered if there are Piscataway Indians out there with resources that could help address the issue of homelessness, but we just don’t know,” said Kyle, adding that it prompted him to enlarge his original dream to include finding out what skills and resources people might have available “so that I can connect tribal members in need to other individuals who may be able to help.” Kyle says he would like to tackle “big picture issues” such as homelessness, as well as addressing “people’s everyday challenges.

“For example, I would like to create a list of licensed, insured, and experienced day care providers in the Piscataway Conoy Tribe so that working families can find a reliable provider nearby,” he said. “This would also benefit the small business because it would be finding new customers. “I want to connect unemployed and underemployed tribal members with companies that are looking for motivated workers. I believe we already have the answers to many of the challenges we face, but we’re lacking the data to make the necessary connections.”

Kyle told us that as he discussed his ideas with tribal elders and others, “things fell into place. “I realized that a survey would be valuable to the Piscataway Conoy Tribe’s efforts to win federal recognition, which have been stalled since the 1970s. “I also learned that there are ten times as many ‘unenrolled’ tribal members as there are people enrolled. Some of them don’t realize that they qualify by being able to trace their lineage back to one of the seven tribal families. “Others are intimidated by the process or aren’t sure if enrolling is worth it. By interviewing enrolled tribal members, I’ll have the opportunity to learn about their relatives who aren’t tribal members, reach out to these folks, and answer their questions.

“To my knowledge, a comprehensive census of the Piscataway Conoy Tribe in the manner that I’m planning has never been done. The information the tribal chief and tribal elders had about members was always self-reported and, for that reason, inherently incomplete.”

Kyle noted that his dream compliments well this year’s Dreamstarter theme of social action. “My project fits into this year’s theme because it will help catalyze change that will benefit our tribal members. “In the future, when the Piscataway Conoy Tribe or a nonprofit wants to help, our leaders will be able to prioritize based on knowing the precise rates of homelessness, hunger, and so on.

“They’ll be able to define the problem and what it will take to address these issues in our communities.”