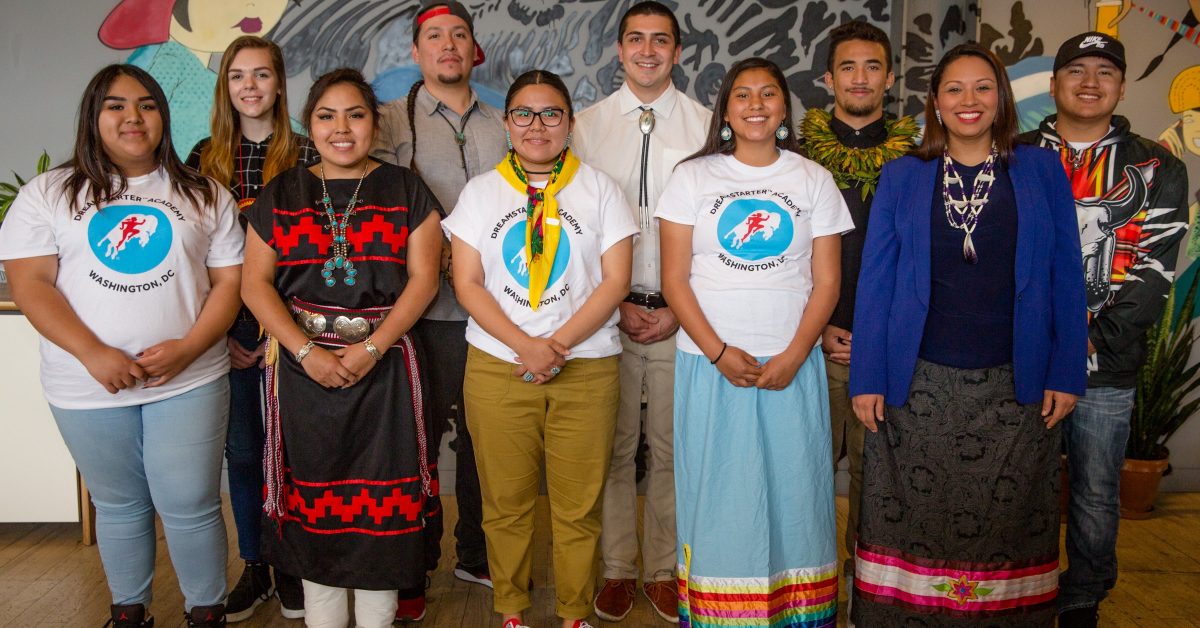 Since Running Strong for American Indian Youth® announced the creation of our Dreamstarter® program in 2014 in recognition of the 50th anniversary of Running Strong spokesman Billy Mills’ historic Olympic gold medal win, 40 promising Native American teens and young adults have been selected for $10,000 grants to jumpstart their dreams.

That’s what Billy said over and over to himself in the days, weeks, months and years that led up to that fateful day when he accomplished his dream of winning the gold medal in the 10,000-meter race in Tokyo. He never gave up striving to achieve his own dream.

But that wasn’t the culmination of Billy’s dream. In fact, it was only a stepping stone for all that was yet to come.

Growing up orphaned and living in poverty on the Pine Ridge Indian Reservation, Billy wanted to give back to all those who had helped him in his youth – his family members, his friends, his community – and his Olympic victory enabled him to do that through his work with Running Strong.

Now, Billy’s dream of helping other Native youth achieve their dreams lives on through the Dreamstarter® program.

In 2015, there were Samantha, Darius, Breanna, James, Jacquelyn, Rashaun, Noah, Cristin, Ronnie and Nathaniel, who all had dreams of bringing health and wellness to their communities.

Noah (Southern Ute, Southern Cheyenne and Caddo), who lost the use of his legs in a tragic car crash, wanted others like him to learn the sport of wheelchair basketball through summer camps he organized.

Cristin (Cheyenne River Sioux) was a dental student who dreamt of helping Native American college students with an interest in dentistry navigate the complex application process to dental school – something she did all on her own.

Today, Noah is playing Division I wheelchair basketball at the University of Illinois, after leading the Denver Jr. Rolling Nuggets to the team’s first National Wheelchair Basketball Association championship in 2017 where he received Most Valuable Player honors. In addition to his athletic endeavors, he is studying computer science and mathematics.

As for Cristin, even though she realized her own personal dream of becoming a dentist and serving Native American children and adults, her dream is also living on through dental students at her alma mater, the A.T. Still University’s Arizona School of Dentistry & Oral Health, who are following in her footsteps continuing that Pre-Admission Workshop for prospective dental students.

In 2016, Charmayne, Ruben, Kelsey, Jenna, Robert, JoRee, Jeremy, Annie, Blaze, and Rosalia all had dreams focusing on the arts and cultures of their tribes.

Jeremy (Shinnecock and Hassanamisco-Nipmuc) was earning his Masters in Fine Arts in photography at Pennsylvania State University when he successfully applied for a Dreamstarter® grant, enabling him to photograph sites of his tribe’s nearly forgotten past. His recently-published fine arts book, “On This Site,” documents the indigenous cultural landscapes on Long Island, NY, and is available through https://www.jeremynative.com/work/art/on-this-site/.

Annie (Cheyenne River Sioux), is a talented artist and who has realized her dream of actually marketing her beautiful artwork and making a living doing what she loves, while at the same time encouraging others just like her to express their creativity and earn money at the same time. Annie is now broadly expanding the reach of where she sells her prints, greeting cards, mugs, and cutting boards (including at our own website).

In 2017, Dreamstarters® Hokani, Brian B., Brian S., Kristina, Riel, Roo, Sara, Shayleena, Stephan and Caitlin had diverse dreams all revolving around the theme of education.

Hokani (Native Hawaiian) was only 14 when he was selected as one of the youngest members of the Dreamstarter® family. But his youth was no barrier in achieving his dream of uniting his community on the Big Island to come together to not only construct a traditional Hawaiian canoe, but teach young people (and adults) its cultural importance to their history and traditions and how it ties to the environment and the world.

Kristina (Eastern Band of Cherokee Indians) is known to thousands of Native American elementary school children as the Native American ToothFairy – and that’s exactly what she is. Kristina, a dental hygienist, travels from school to school with large student body populations of Native children educating them about the importance of properly taking care of their teeth, instructing them how to do so, and then providing them with dental kits containing toothbrushes, toothpaste, dental floss and more.

This year’s class of Dreamstarters® was announced in March and will all be descending on Washington, D.C., for the Dreamstarter® Academy from April 21 – 24.

At the Dreamstarter® Academy, Tara, Kendrick, Kunu, Lourdes, Kelsey, Rose, Michael, Lauren, Easton and Sunny, whose dreams focus on science and the environment, will meet each other for the first time and, if history is any guide, will develop relationships that will endure beyond their one-year tenure as a Dreamstarter®.

In addition, at the academy they will attend workshops where they will learn to promote and execute their dream projects, learn how to budget their grant funds in the most cost-effective manner and, for most if not all, the highlight of the event will be meeting Billy and sitting down with him for an extended one-on-one interview where they will tell him all about their dream, and how with the help of Running Strong, they are certain it will come to realization.