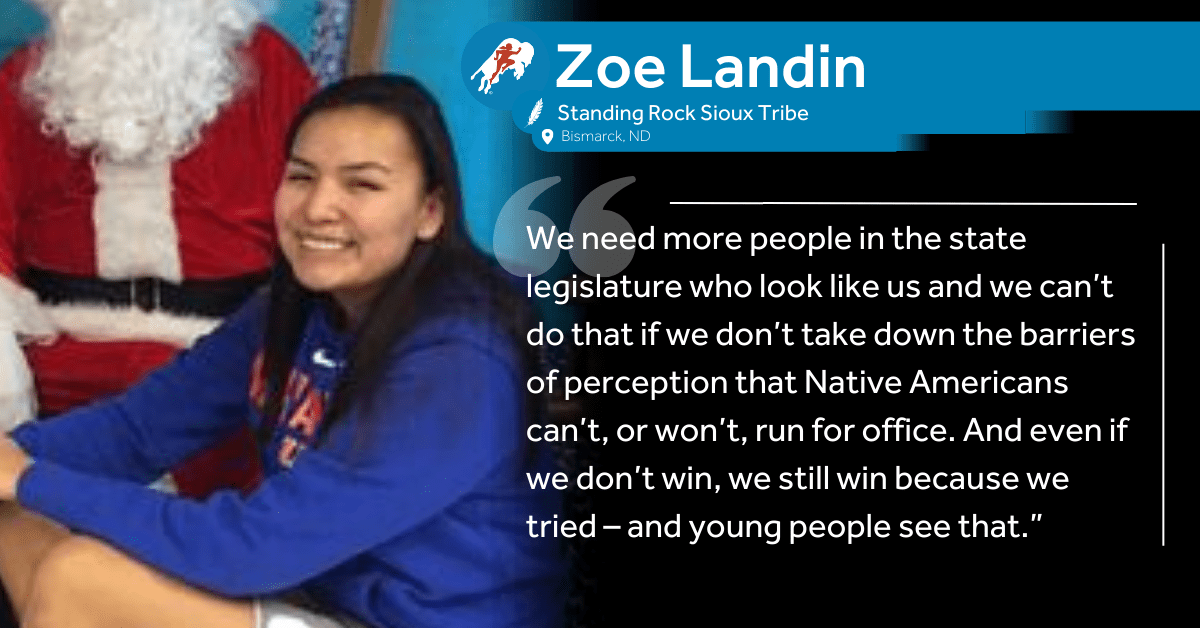 2022 Running Strong for American Indian Youth® Dreamstarter Zoe Landin, 19, (Standing Rock Sioux), of Bismarck, North Dakota has a dream”to help Native American youth break down the ideological and technical barriers to running for local city, statewide and national offices.” Zoe encourages youth to consider running for office by educating them on the election process while stressing how important it to
support current Native candidates.

Zoe’s dream was sparked when during her senior year of high school she took part in a field trip to the North Dakota state capitol, an experience that was very memorable to her. At such a young age, Zoe noticed that “It seems to me that we as Native Americans have always been excluded from these seats, but we are just what is needed to provide a unique perspective to office.

“The success of the first Native American woman in the North Dakota State Legislature, Rep. Ruth Buffalo (who took office on December 1, 2018) helped inspire me towards this dream. “She basically took it upon herself to get elected, help pass bills about Missing and Murdered Indigenous Women, and also to get Native American history taught in the schools.”

Now Zoe is concerned that Rep. Buffalo chances of reelection have been diminished through statewide redistricting. “I think this says that Native Americans need to be more informed about being involved in what is happening with elected leaders and who represents us,” says Zoe. “We have a long history of having voter suppression and not being involved in state and national politics, and that has to change for us.”

While still in high school, Zoe started working with Native Vote in 2018 as an outreach worker at Running Strong’s partner in Mandan, North Dakota, the Sacred Pipe Resource Center. “We would go door to door in neighborhoods to reach out to all voters, but also to find Native voters,” she told us. “When we found Native voters, we would tell them how important it was to vote. “I really enjoyed this experience with Rep. Buffalo getting elected and some of the voter suppression things that have happened in my state during this election have been a reason I wanted to do this project.

“While she is proud of the work she has done to help get the Native vote out in her community, now she wants to do more “than just getting people to vote, but also getting them to vote for Native candidates. “So, then we have to make it easier for Native people to vote by giving them good candidates to vote for who will represent them.” Zoe recalled how Rep. Buffalo invited students to sit in her legislative seat on the floor of the chamber providing them with the realization of knowing that one day they too could be a member of their state’s House of Representatives just as Rep. Buffalo is today. “I want to expand on that and let Native youth know what to expect and how to go about running for office because nobody tells us or shows us that.”

Zoe is planning on using her $10,000 Dreamstarter grant to host a “Running Strong for Public Office” exploration event and hit the ground running in April to begin recruitment of Native youth, create a steering committee, and host an event in the fall to “mobilize the Native youth vote” before the mid-term elections. “I don’t think there is anything like this out there that gives young Native people an idea of how or why they should think about running for office. I think if you live on the reservation, it’s easier because you only have to think about running for Tribal Council and that’s always going to be there, but it’s harder to run for off-reservation offices – but also more important because that’s where we need more representation.

“We need more people [in the state legislature] who look like us,” says Zoe. “We can’t do that if we take down the barriers of perception that Native Americans can’t, or won’t, run for office. “And even if we don’t win, we still win because we tried – and young people see that.”