Winterwear makes a difference for our partners in Indian Country

For decades, our partners, and the Native American children and families they serve throughout Indian Country, have relied on the kindness of strangers – notably our loyal and generous supporters – to ensure that thousands don’t have to bear the brunt of a frigid winter in a tattered, hand-me-down coat, or worse, merely a sweater or sweatshirt.

This year, we plan on distributing 3,000 child-size new, heavy winter coats; 1,500 adult-size coats; 3,500 pairs of gloves, hats and scarves; 4,000 pairs of toddler and child-size boots and 2,000 blankets to 20 of our partners, as well as to our field office, Tipi Waste Un Zanapi (Wellness Through a Good Home) on the Pine Ridge Indian Reservation. 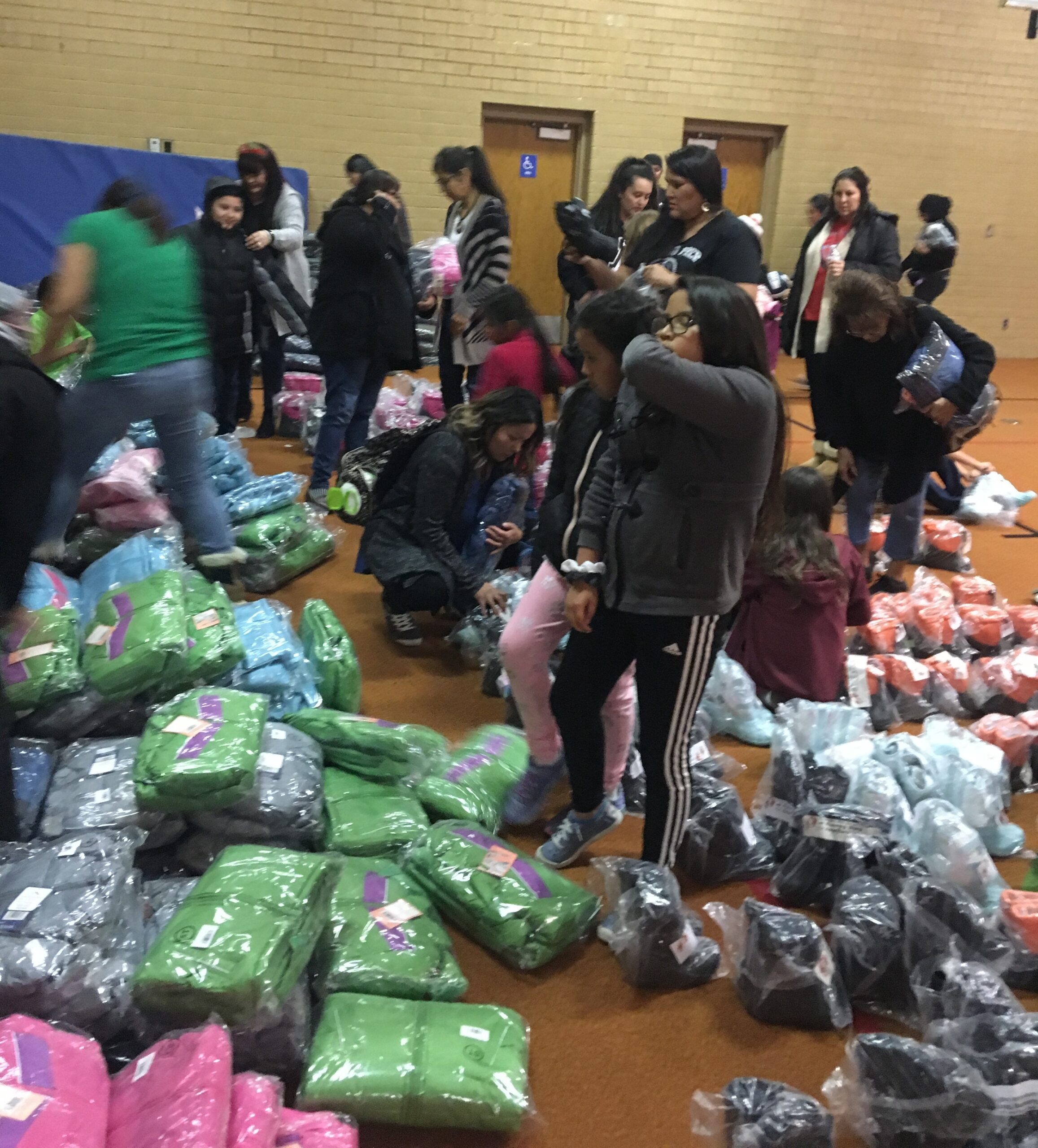 These partners are located on reservations and in urban areas with large Native populations in several states including Arizona, Colorado, Kansas, Minnesota, Montana, New York, North Dakota, Oklahoma, South Carolina, South Dakota and Utah, where the need is great and just putting food on the table for these families is a struggle, much less buying new coats and boots for fast-growing children.

Among them is the Bridge Foundation in Garryowen, Montana, where 2016  Running Strong for American Indian Youth® Dreamstarter JoRee LaFrance is a member of its board of directors who tells us that “There is a very high unemployment rate on the Crow Reservation, which in turn, adversely impacts the social and economic stability of my people.

“The Crow Reservation is nestled between the Big Horn Mountains and the rolling plains. The winters in Montana are always brutal with a few feet of snow and temperatures that can reach below 0 degrees F.

“We usually get our first snowfall and cold temperatures at the end of October and beginning of November. The season does not end until late April with some occasional snowfalls happening in May but we have the typical snowmelt/winter season.

“COVID-19 has amplified the disparities that my community faces,” she added. “There are many needs in my community and I am very grateful that Running Strong has provided some remedy for my people over the years.”

In Rock Hill, South Carolina, Wenonah Haire, executive director of the Catawba Cultural Preservation Project, recalled following their distribution of winter wear provided by Running Strong that “one child was SHOCKED! that we had such a nice coat and winter kit for her – and it was all free!

“She was so happy to be able to pick out the color she wanted. I remember her putting the coat on and they look on her face was one of being dressed as a queen! You would have thought that you had given her a mink coat!! 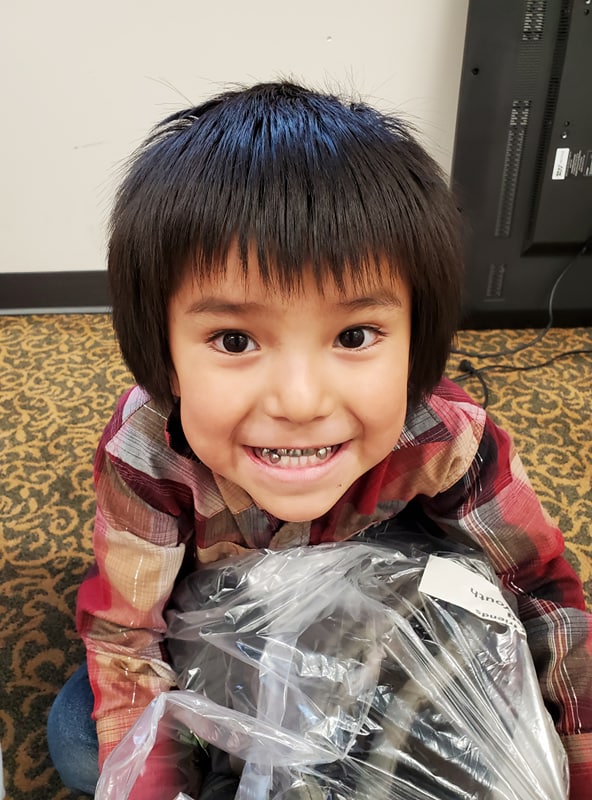 At the Denver Indian Center in Colorado, facility manager Jakeob Lamping reported after last year’s distribution that a family of six children came in and the youngest, a girl, was not wearing any shoes – even through the temperature outside that day was 16 degrees.

“She received a pair of new warm boots and started walking all over the gym area in them,” he said, noting that prior to receiving the boots the shy little girl would not leave her mother’s side.

Kelly Miller, director of Interfaith Action, Department of Indian Work in St. Paul, Minnesota, reported last year that “The fleece-lined coats were a huge hit! During the distribution, people were very excited about the lining and the extra warmth it provides.

“The style and designs of the girls’ and boys’ boots were also a huge hit. When the youth came in to choose their own pair, their faces lit up at the many different colorful options.”

Kelly also passed along some words of gratitude to the supporters of Running Strong from their grateful clients:

“With having a large family, I can’t always afford to buy new things. The Division of Indian Work has helped me throughout the year to get coats, boots, scarves and hats as well as shoes and backpacks filled with school supplies for my children.

“Knowing that I can count on the Division of Indian Work and Running Strong for American Indian Youth® lifts a huge burden for our family.”

“Oh my gosh, they are so warm!” exclaimed on recipient, while another commented, “You guys literally saved my life, I had the same ripped coat from last year.” 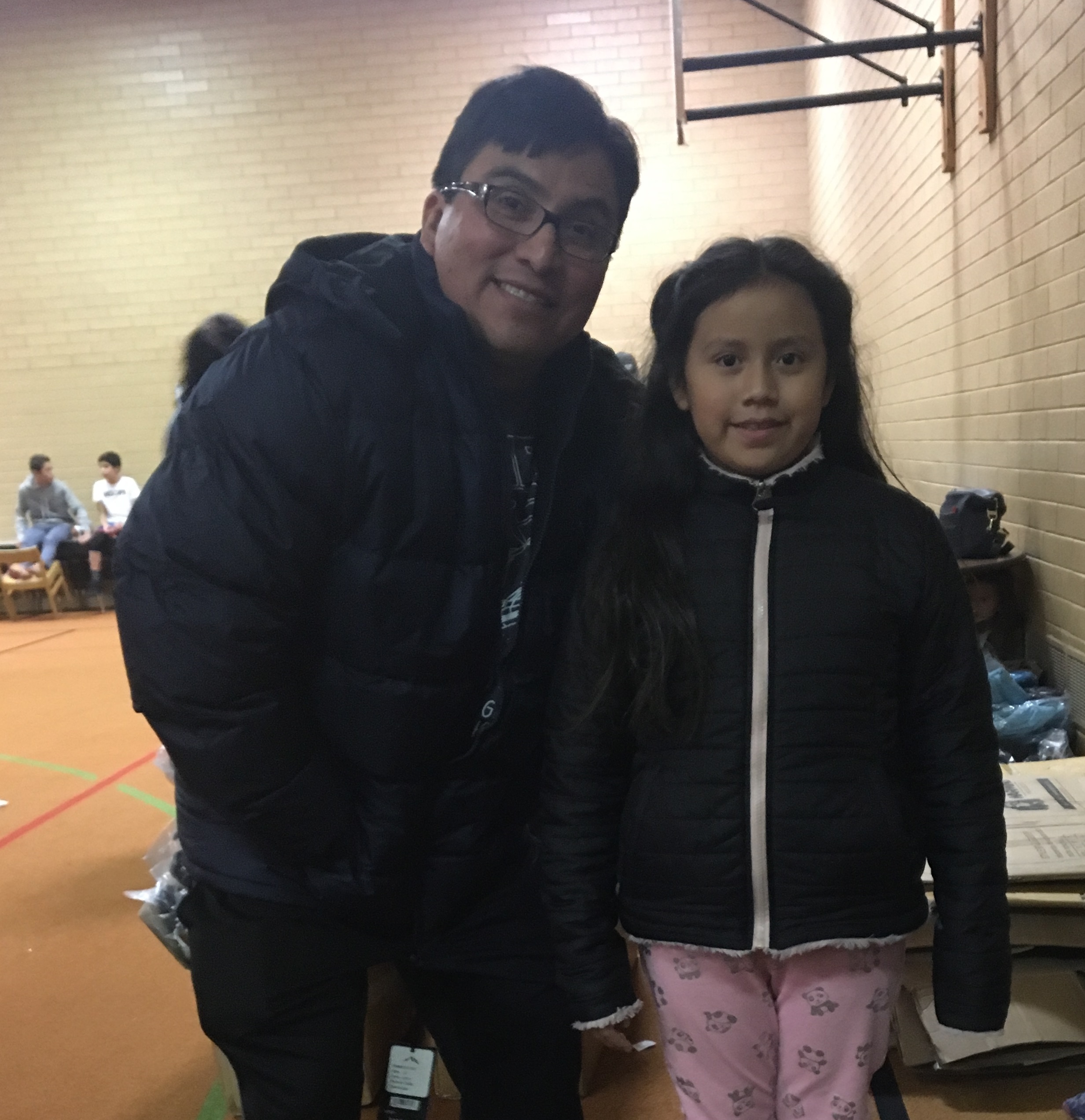 “Utah is cold and harsh in the wintertime, so the winter wear is very useful,” says Eileen. “Winters here can be stormy with lots of snow, and very low temperatures.”

At the Boys & Girls Club of the Northern Cheyenne Nation in Lame Deer, Montana, Emma Harris, director of unit operations, notes that “Our weather can be extremely cold during the winter months. Very often schools are closed due to the extreme cold, and there are times with our club most close as well – it is normal for our temperatures to reach 0 degrees and below.”

“I am so happy to get a new coat and boots,” one young boy told Emma. “The other kids at school made fun of me because I didn’t have either – now they can’t make fun of me any more!”

And a single mother struggling provide for her several children, told her “The coats, boots, hats, gloves and scarves have lifted a huge burden off my shoulders. I actually feel like someone cares about those of  us who have a hard time just trying to get by…I would like to that all those who gave us this gift. It means so much to me!” 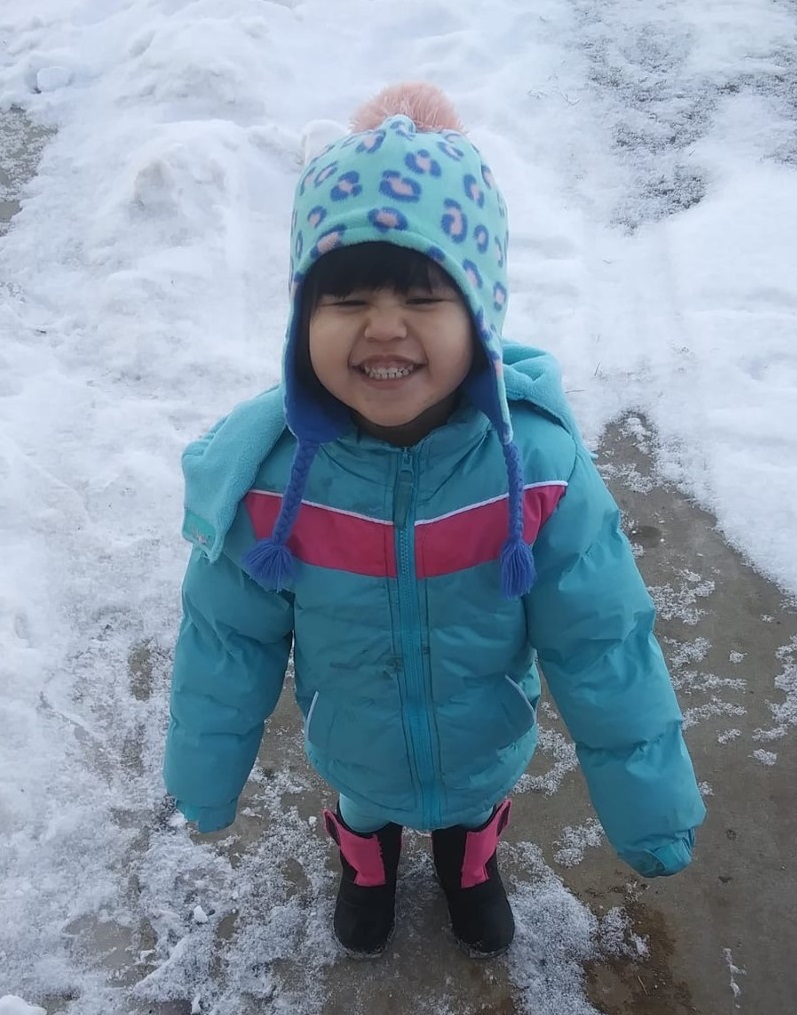 In Chinle, Arizona, Anita Begay,  president of Today We Follow-Tomorrow We Lead, reported following last year’s distribution that “The children love their new winter snow boots, and were very happy with the winter coats that  are very thick and warm.”

Recipient David and his wife have four children and said that “During the winter months it is hard because after we pay bills and buy food, we cannot afford to buy the winter clothing that my children need.

“Now they have warm coats and snow boots to keep them warm when waiting for the school bus outside. We are thankful for you help very much. Receiving the winterwear from you makes one worry go away for the winter, and the children are warm from head to toe.”

And Haley Turning Heart, project administrator for our longtime partner the Yuchi Language Project in Sapulpa, Oklahoma, who is striving to preserve the native language before the last of the elders fluent in the language pass on, told us that “These winter items are a huge blessing for our Yuchi families. 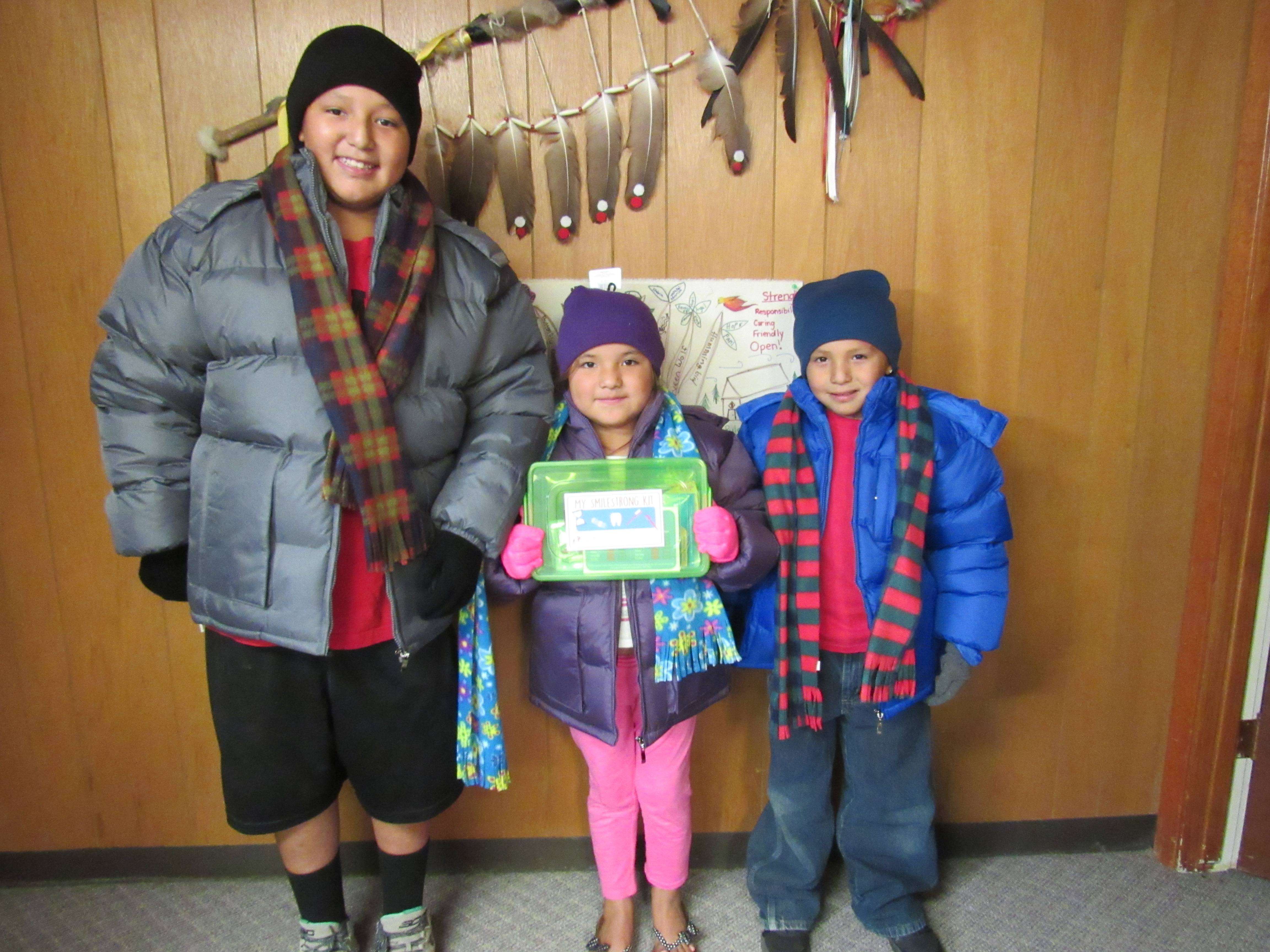 “We are proud to see the kids running around outside the Yuchi House, fully outfitted with coats, gloves, hats, scarves and boots from Running Strong for American Indian Youth®. The items are very high quality – and look great too!

“@lA k’ayasOTa (Big thank you) to Running Strong for American Indian Youth, from all of our Yuchi children and families!”