“This online series will use digital and social media to share young and successful indigenous people’s experiences in achieving their lives’ ambitions,” Jacob told us in his Dreamstarter application.

“Each video will highlight an individual telling their story — delivered with authenticity and designed to uplift and motivate the audience in their own individual journeys to enrich their reserves and reservations.”

In addition, the Arrow’s Journey Indigenous Initiative also created internship opportunities to enable Native youth to gain the tools and guidance needed to create media to fill the void of the indigenous voice, he told us.

When Jacob submitted his application he was a senior at Utah Valley University in Orem, Utah, pursing a bachelor’s degree in Business Management with an emphasis in International Business and was employed as the partnership coordinator with the American Indigenous Business Leaders.

He also is an active advocate for multiple non-profit organizations such as Salt Lake City Air Protectors, Urban Indian Center board of directors as well as instructing Native elementary school students in powwow-style dancing and and singing. 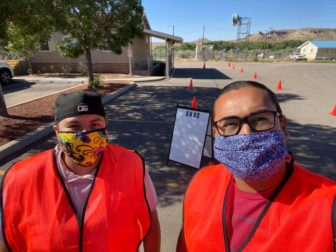 Among the more than 150 Native children who benefited from the Arrow’s Journey programming in the first six months of his Dreamstarter project alone was a young girl whose mother recounted to us how Jacob’s idea has impacted her daughter’s life.

“My child grew up away from the reservation in an urban setting,” she told us. “She needed help staying connected to her roots while being away from her Native language, culture, history and peers.

“The Arrow’s Journey has been such a great way for my daughter to not only hear the stories of our people, but actually connect with multiple aspiring Native youth in action about their stories.

“My children watch these episodes every morning before school. This program is needed because it connects youth to positive role models within the Indigenous circle and also helps them to see that there is light at the end of the tunnel.

“This online program has been such a blessing to our little Utah community,” she added. “Using social media as a means to reach our youth is a great way because my kids are constantly online day-in and day-out.

Another young Native American who has benefited through Jacob’s $10,000 Dreamstarter grant is Michael Rehouse, a member of the Navajo Nation, who worked as an intern at Arrow’s Journey to get hands-on experience with a camera.

“Because of this internship I have met so many Native American organizations, including multiple Native-led nonprofits,” Michael told us. “What this internship did for me was open my eyes to the media realm where I now have excelled in my camera work, editing, publishing, writing and confidence as a Native man.

“Arrow’s Journey Indigenous Initiative has positively impacted my life for the better and I look forward to working with them for years to come.”

Jacob also shared with us some quotes from those who have viewed Arrow’s Journey programming. Among them are:

“I cried listening to your words because they are very strong and powerful.”

“You are an inspiration to us all… a very beautiful woman with an amazing story.”

“Beautiful! Strong women like you make me proud to be Native even more!”

As for Jacob, he wanted the supporters of Running Strong for American Indian Youth to know this:

“I would like to express my utmost gratitude that as an indigenous entrepreneur there are grants, opportunities and role models like Billy Mills and Running Strong to aid in the futures of indigenous youth.

“All of us at the Arrow’s Journey Indigenous Initiative have been inspired and we look forward in continuing to inspire youth and their home communities.

“Many thanks for voicing your ‘arrow’s journeys’ to young indigenous people like myself.”