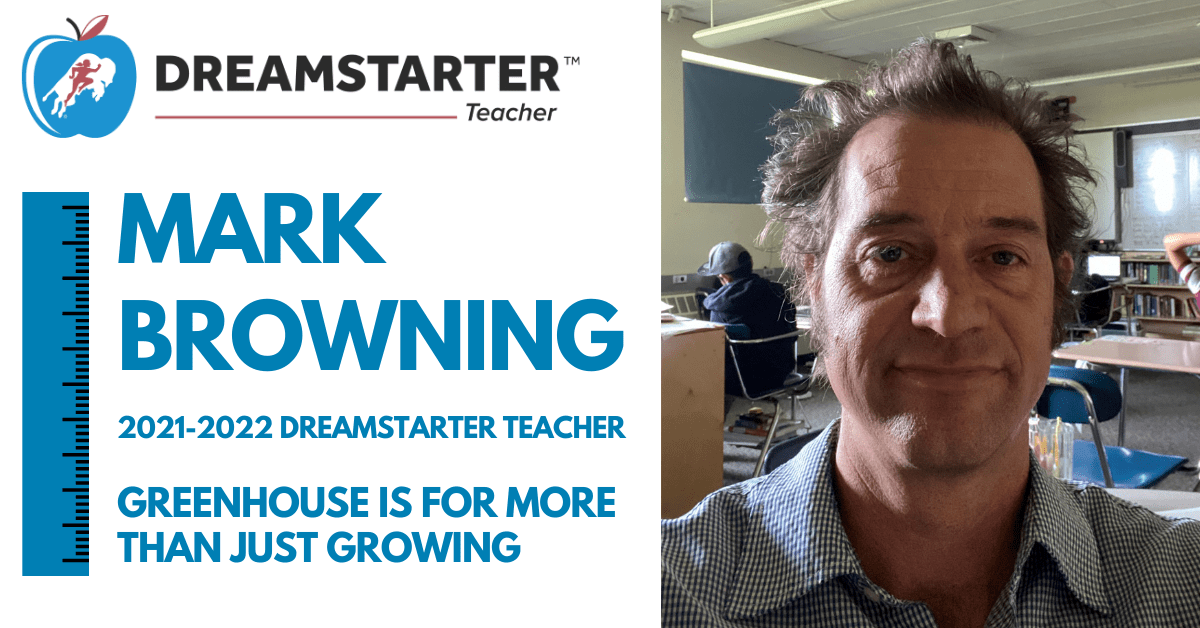 Running Strong for American Indian Youth® 2021-2022 Dreamstarter Teacher Mark Browning is a fourth-grade teacher in the Hoonah City Schools district in Hoonah, Alaska, where he has been working to light a mobile greenhouse using LED and high-pressure sodium lights to grow fresh vegetables for the school all year long.

The small town of Hoonah has a population of about 850 residents, predominantly of Tlingit origin, and the student body is nearly 90 percent Tlingit and 100 percent free and reduced-price lunch program.

“Hoonah sits on Chicagoff Island, and so we are far removed from any of the transportation systems that regularly supply foods to communities,” noted Mark. “For this reason, we suffer a shortage of fresh fruits and vegetables aside from subsistence harvesting: berries, and fiddleheads, Devils Club Artichokes, and all the fresh fish and game one could need.

“Students come from homes where hardship is common, and homes can be high stress environments for students. However, the student population and the community both are very centered in their cultural attributes.”

In May, Mark’s project was reported on in the Juneau Empire newspaper in an article, “Resilient People & Place: Moby the Mobile Greenhouse cultivates community” detailing the traveling classroom on wheels.

“Moby continues to be a catalyst for learning opportunities and conversations around local foods,” the article states. “During the school year, Moby is parked outside the school where fourth-grade teacher Mark Browning has been leading the charge in getting students and staff involved.”

Mark said in the article that “I had been hearing from community members that they wanted a greenhouse where kids can learn to grow their own foods. This was the perfect opportunity to get that started.”

In his Dreamstarter Teacher application, Mark said among his goals is “to involve as many kids as I can in the adventure of doing hands-on science.

“A greenhouse is an exceptional place to make this happen.”

A second goal is for the students to benefit directly from the garden itself with all the vegetables grown to be used for meals in the school cafeteria.

Thirdly, “My final goal is to use this greenhouse, fully lit as proof of concept for a larger grow house that already exists on the property but sits unused.

“I am trying to show people that with the space and with the use of LED lights, Alaskan’s can grow vegetables at a reasonable expense throughout the year here and not have to pay out the ear for it and receive sub-par vegetables.”

Moby the Mobile Greenhouse, a project of the Southeast Alaska Watershed Coalition, has been “catalyzing learning opportunities and discussions about food growing in Southeast Alaska’s rural communities since 2016” and since its launch, it has traveled to the towns of Kake, Yakutat and Sitkia before returning to Hoonah in 2020, according to the Juneau Empire.

Moby continues to be a catalyst for learning opportunities and conversations around local foods, the article states.

During the school year, Moby is parked outside the school where fourth-grade teacher Mark Browning has been leading the charge in getting students and staff involved.

“I had been hearing from community members that they wanted a greenhouse where kids can learn to grow their own foods,” Mark told the Juneau Empire. “This was the perfect opportunity to get that started.”

In spring 2021, Mark and other teachers coordinated with kindergarten through fifth grade classrooms to plant the first round of vegetables including a variety of greens, radishes, beans along with some herbs.

The community is all-in on the project, purchasing these vegetable seedlings as a fundraiser which generated about $350 to go towards growing supplies, as well as donating items to help improve and expand the greenhouse.

And because Moby will eventually move on to another community, Mark and other staff are working with the school district to set up additional LED-lit vegetable growing spaces at the school.

“We hope this will make it possible for students to continue learning to grow vegetables, experiment with food growing ideas, learn science, eat great homegrown food and enjoy the warmth of a winter greenhouse,” he told the Juneau Empire.

And to Running Strong co-founder, national spokesperson and Olympic gold medalist Billy Mills, Mark says, “Our school, and much of remote Alaska is cursed with expensive vegetables of poor quality.

“I am on a mission to change this.

“I propose science, ingenuity, and the technology that we already have will allow us to better produce vegetables for Alaskans rather than continuing with the failing methods we use today to purchase and eat the vegetables we need for survival.”