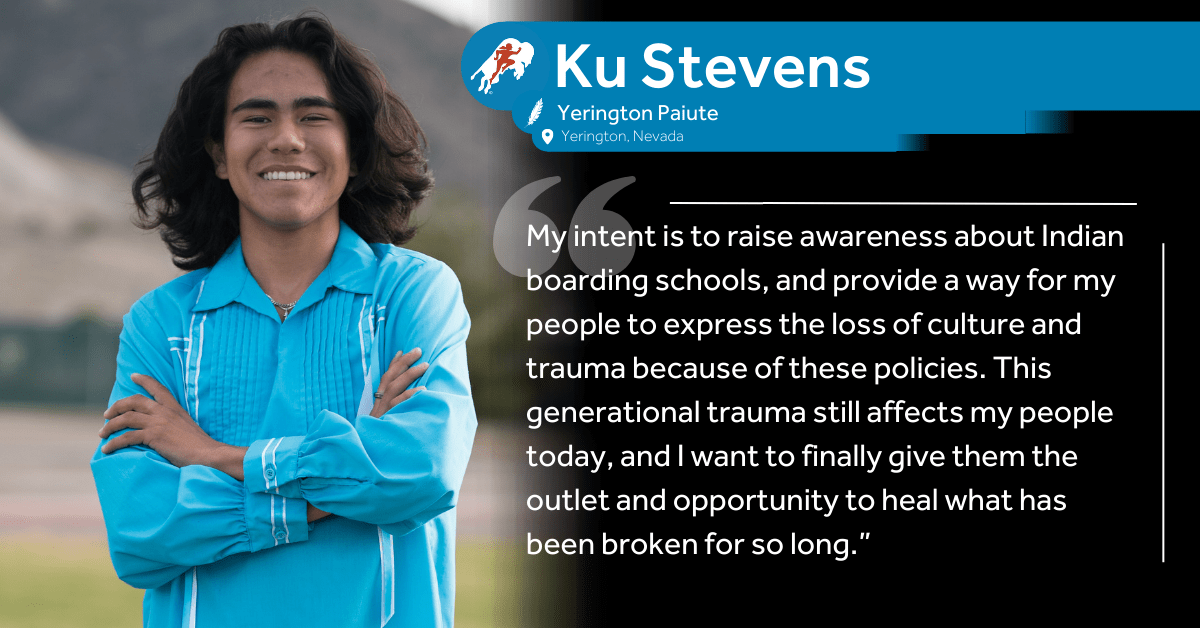 2022 Running Strong for American Indian Youth® Dreamstarter Ku Stevens, 18, (Yerington Paiute), of Yerington, Nevada, dream is to host a second “Remembrance Run.” The first run he held was in 2021 from the Stewart Indian Boarding School in Carson City, Nevada, through the desert and mountains to the Yerington Paiute Reservation. This run was in honor of the children who ran from Stewart to their homeland, including his “togo” (great-grandfather). And to remember those who never made it home.

Last August, Ku led a group of approximately 150 runners, walkers, and volunteers in the 50-mile, two-day run which included an overnight camp in the mountains which was featured in The New York Times in November. For his Dreamstarter project, Ku and participants will complete the Remembrance Run in the opposite direction, “bringing offerings from my tribe in Yerington to the graves at Stewart. Invited dignitaries will speak of the progress of bringing awareness of the true history of boarding schools to the general consciousness of the U.S. and of the steps they have taken towards reconciliation.”

Ku’s intent in organizing the first Remembrance Run was “to raise awareness of the issue and to provide a way for my people to express the loss of culture they experienced through governments boarding schools. This policy still affects their lives today, and I want to create an environment for healing for survivors.”

At the campsite following the first day of running, Ku asked for everyone to share their own stories of the boarding schools and how it affected themselves or loved ones. “Many people cried, a few raised their voices in anger, but the majority expressed how happy they were to be on the run with me, and spoke of feeling better, healed by the grueling journey.”

Ku, an accomplished long-distance runner and state cross-country champion, told us that Running Strong co-founder and national spokesperson Olympic gold medalist Billy Mills “has been a hero of mine forever.” He told us that after being featured in Runners World online, the Reno Gazette Journal for his solo cross-country season, and his Nevada state championship title, a friend of Billy’s passed on the news stories to him. Billy then reached out on social media to Ku’s mother, expressing his want to meet Ku.
“His wife, Pat, called us at home and said that Billy would like to meet me,” Ku told us. “I was so blown away! “The Mills’ welcomed my parents and I with huge hugs and we sat on the patio with our Covid masks on, and Billy told me about his experience in the 1964 Olympics and how it felt to win the gold in the 10,000-meter race. I felt so honored to hear the story from the man himself. “I hope to one day follow in his footsteps by competing at the Olympic level. Being labeled a Native underdog only spurs me on, and I run with Billy in my heart.”

Regarding his Togo, Frank Quinn, Ku said he was only 8 years old “when the government took him from his family and deposited him at Stewart, with the intention of ‘killing the Indian.’” The conditions were harsh, food was scarce, clothing inadequate, and the staff were cruel to the children. Frank decided to escape and run all the way back home. He made it through the desert and over the mountains to his home, only to be recaptured, returned to the school, and punished. But that wasn’t the last time Frank would run away as he then attempted to run away a second time while shackled by the leg to another boy. Th pair was subsequently recaptured and retuned to the school. Still having a fire lit in him, “He escaped a third time, making it all the way home again, and the government finally gave up coming for him,” says Ku. “He grew up with his family, speaking his own language, and becoming a tribal leader and councilman, even traveling to Washington, D.C. to represent his people.”

There were many children who were not so fortunate, with the small graves at Stewart serving as harsh reminders. “I decided to honor those who survived and those who never came home by using my running ability to retrace my Togo’s escape through the desert and mountains.

“My intent is to raise awareness of the issue, and to provide a way for my people to express the loss of culture and trauma they experienced because of the governments boarding school policies. This generational trauma still affects my people today, and I want to finally give them the outlet and opportunity to heal what has been broken for so long.”