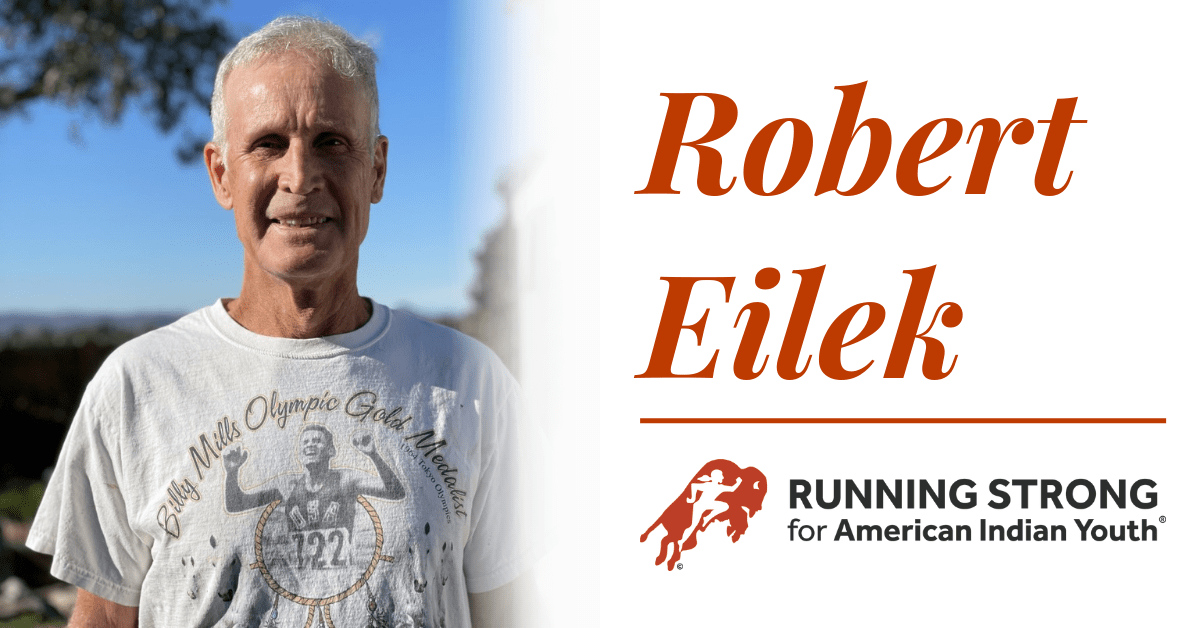 Robert Eilek of Temecula, California, was a middle school math teacher for more than 40 years before his retirement in 2019.

During all those years, Robert, now 70, also stayed true to his passion for long-distance running, “cranking out at least 80 miles a week,” reported Carl Love, a contributing columnist to The Press-Enterprise of Murrieta, California, in a February column about Robert’s upcoming 3,000-mile cross-country run to benefit Running Strong for American Indian Youth®.

Robert, of Santee Sioux ancestry, is planning on beginning his run on April 30 from Oceanside Pier to New York City culminating about four months later with a jump in the Atlantic Ocean.

Robert recently told us that he first learned of Running Strong several years ago when a friend of his (a supporter of Running Strong) told him about the organization co-founded by Olympic gold medalist Billy Mills “that provided a myriad of services including support for food, housing, youth centers, education, healthcare, and much more to assist the Native American population throughout the United States.”

While he has never had the chance to meet Billy, “However, the movie ‘Running Brave’ was very inspirational to me in the sense that Mr. Mills faced many obstacles (racism, poverty, cruel stereotypes, loss of his parents at a young age, ad infinitum) and conquered them all.

“He is truly a champion and a legitimate American hero,” Robert added. “I watch his victory in the 1964 Tokyo Olympics on many occasions and his electrifying final lap in the 10,000-meter run brings tears to my eyes every time.”

Robert acknowledges that he is definitely running for both the adventure and challenge, “but more importantly, to provide assistance to needy Native Americans.”

At this point, he told us it looks like he will be running solo with either a backpack or stroller since so far he has been unsuccessful in finding a driver/crew chief, noting that the 4-month journey is a long commitment and most people just cannot afford to sustain that.

In the meantime, he is reaching out to others who could possibly give him one month of their time to escort/drive his SUV support vehicle as he runs through the Arizona desert heading to southern Colorado, which at that point he would continue on his own.

“Regardless, I am determined to accomplish this mission,” says the U.S. Air Force veteran.

And Robert, who has set a personal goal of $50,000 to raise for Running Strong, explained the reason he was prompted to choose Running Strong as the beneficiary of his cross-country run “was simply their primary and genuine emphasis on helping Native Americans throughout our nation.

“And I wanted to do something to aid that cause.”