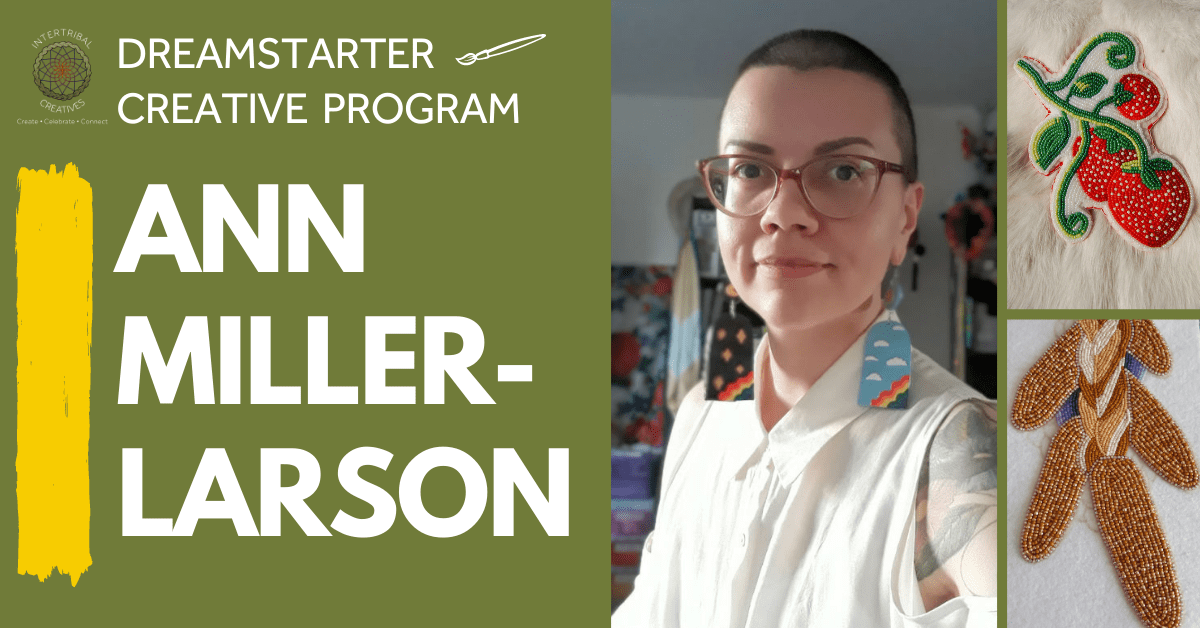 With her $2,180 Dreamstarter Creative grant for her project “Our Foodways Are Sacred,” she purchased beads, needles, thread, quills, birch bark and other items to create four large beaded pieces that address the importance of traditional food ways and food sovereignty, depicting foods such as wild rice, strawberries, corn and walleye that she noted are deeply ingrained in both Ojibwe and Oneida cultural traditions.”

In addition to the beadwork itself, Ann also wrote short narratives describing the foods depicted, their cultural significance, and how Ojibwe and Oneida people are working to preserve traditional, sustainable food systems.

“I was able to purchase a read several books that discussed the topics of food sovereignty and traditional food ways and used knowledge I gained from these books to write narrative to accompany my pieces when they are displayed” – which they were at a local gallery alongside other work by area Indigenous creators.

Ann notes that “creating larger pieces of beadwork is always a challenge.

“They take a great deal of time to conceptualize and complete, but by creating a schedule for myself I was able to complete all of the pieces in time and allot time for my hands to recover between pieces.

“Additionally, there is such a wealth of information out there regarding the topic of food sovereignty and the traditional foods I chose to depict that it was difficult to decide what I wanted to say with my accompanying written pieces.

“Ultimately, I chose to keep the pieces short and poem-like in order to keep the focus on the beaded pieces while offering an easy-to-follow narrative for anyone viewing the work.

“Because of this grant project, I was able to further my beading skills and gain additional knowledge of traditional foodways that I am able to pass on to my family, friends, and community.”