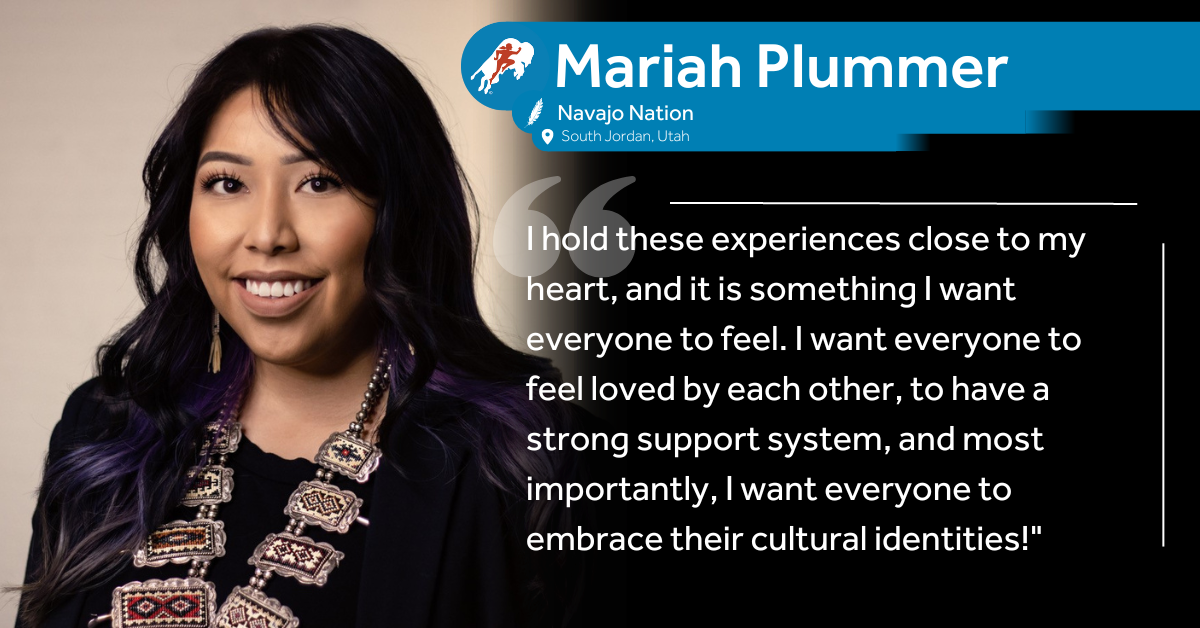 Bringing the Rez to the City

“This project will utilize traditional values of health and wellness, combined with western approaches to promote healthy living for Indigenous peoples,” Mariah told us in her Dreamstarter application. “The Utah K’é’ project will partner with a local recreational center to host cultural and traditional activities, meanwhile providing a safe environment for indigenous community members to achieve physical wellness.”

Mariah explained that the Navajo term “K’é” is used to describe kinship, blood relation and balance – “which are all essential to a person’s inner peace and striving goals. Through this acknowledgement of connecting, indigenous peoples have established resiliency, compassion, generosity and empathy.

“These core values are demonstrated through the Utah K’é project and connects me to my community.”

“The purpose of Utah K’é was to ‘Bring the Rez to the City’ by creating a safe place for Indigenous members of the Salt Lake City to connect and promote cultural preservation through facilitated cultural workshops embracing their inner Rez kid,” she said.

To do that, Mariah established five objectives: Project a positive impact on the indigenous community; Build lasting relationships with members of the community, participants, and partners; Ensure the Utah K’é project will reflect sustainability long term; Facilitate community building; and Create cultural preservation for the Indigenous community in the Salt Lake Valley.

“Attendees were engaged with each presentation, they were not afraid to ask questions or create dialogue, and always looked forward to upcoming workshops,” she reported. “Every participant had something positive to share about Utah K’é and their experience as a participant.”

Mariah noted that at each of the cultural workshops, it was heartwarming for her to see attendees mingling and networking with each other and stayed following the presentations to continue socializing long after the workshops had concluded.

“Around every corner this summer people were smiling, laughing, and sharing good medicine through Utah K’é.”

As the project founder, Mariah made it a priority to maximize the community experience and honor the mission of her mentor organization NavajoStrong by empowering members of the Urban Native community in the Salt Lake area.

As a result of Mariah’s devotion and passion to the project, Utah K’é began to sustain itself.

It was not long after Utah K’é started that instead of inviting community partners to join the program, they were coming to Mariah and NavajoStrong to learn about how they could join their Social Action movement.

She noted that every workshop facilitator was someone who had previously helped, guided, mentored, and/or impacted her life in some way.

Mariah states that, “Without visiting other reservations and developing lifelong relations with its community members, I would not have understood the true meaning of K’é.

Over the course of the program, the dream became a reality with lifelong results. With each workshop, Mariah, her mentor, NavajoStrong program director Gretchen Willard, and all the other staff members of Utah K’é and NavajoStrong, saw more and more people coming out to support one another.

“There were familiar faces from the week before, new faces that were excited to join, and even a few shy faces who fit right in with everyone else!” says Mariah. “Since Utah K’é workshops were community-driven, it was also a great way for the community to understand that social media famous influencers, community workers, and business owners, were just normal people. During the Utah K’é program, people were each friends, relatives, aunties, uncles, grandmas, grandpas, and never strangers.”

Mariah recounted that, based on participant feedback, among the most popular workshops was a Navajo fry bread demonstration “where participants mixed their own fry bread dough by hand, slapped out their dough into a well-rounded circle, cooked it over a propane grill, and ate it together with everyone in the community including their relatives and kin.

“Once the demonstration had concluded, the children went into the gymnasium to play games while the adults remained in the outside classroom to clean up and put away materials.”

A few minutes later, a young girl came up to Mariah and Gretchen to ask, “Will this be open next year?”

She told Utah K’é staff about how her cousin’s sister brings her and her siblings to the city during the summer when they are out of school, telling them, “Sometimes it’s fun, but sometimes it’s scary. This was fun!”

“Through the teachings of K’é, one of my purest passions is serving as a role model and advocate for the Native community,” says Mariah. “When I am not working with other organizations, I am proactively embracing culture teachings among youthful populations and creating healthy social relationships with other indigenous peoples across Indian Country.”

And Mariah has always believed that deep down, Natives will always be Rez Kids, stating, “Even though we all have our own paths, we are just Red Kids at heart. If colonization does not allow us to be home with our families, it’s our time to Bring the Rez to the City!

“The feelings of love, support, kinship, and good medicine that came from Utah K’é is something everyone will remember forever.”

As for Mariah personally, she says being a Running Strong Dreamstarter did exactly what it said it was going to do — It empowered her as a young Diné woman and enabled her to make her dreams a reality.