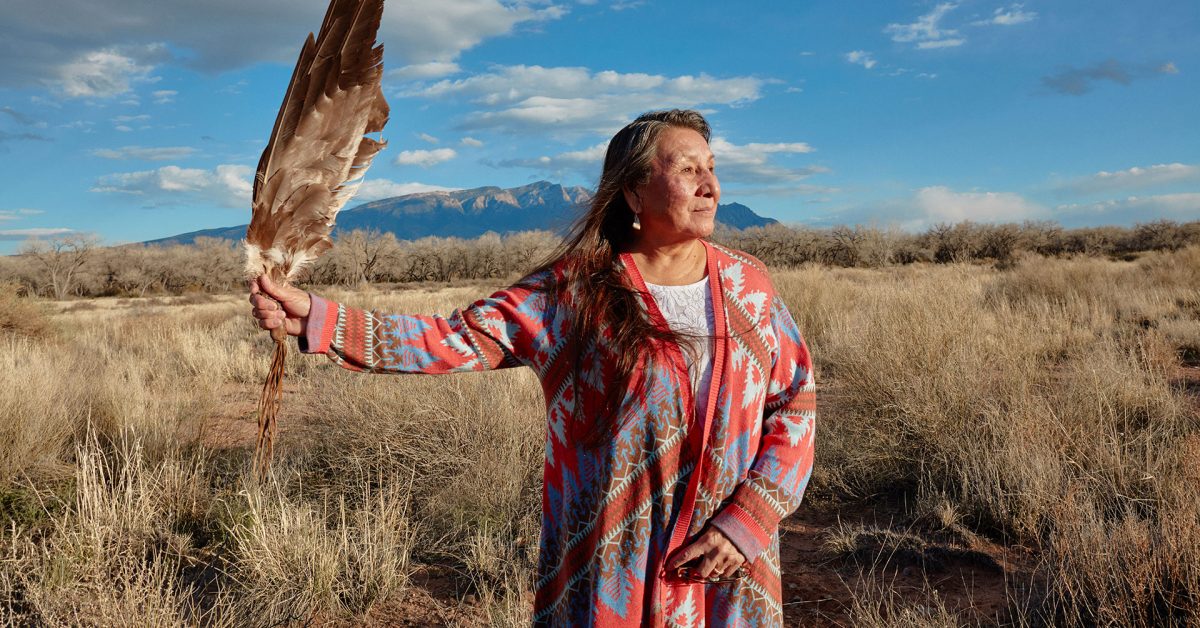 Loretta Afraid of Bear Cook has a long history of commitment to her Oglala Lakota people on the Pine Ridge Indian Reservation, as well as to Running Strong for American Indian Youth®, where she has served on the Running Strong Advisory Board for many years.

In 2016, Loretta made history as part of a delegation of indigenous leaders formally presented Pope Francis with the “Petition to Revoke the Papal Bulls of Discovery.” 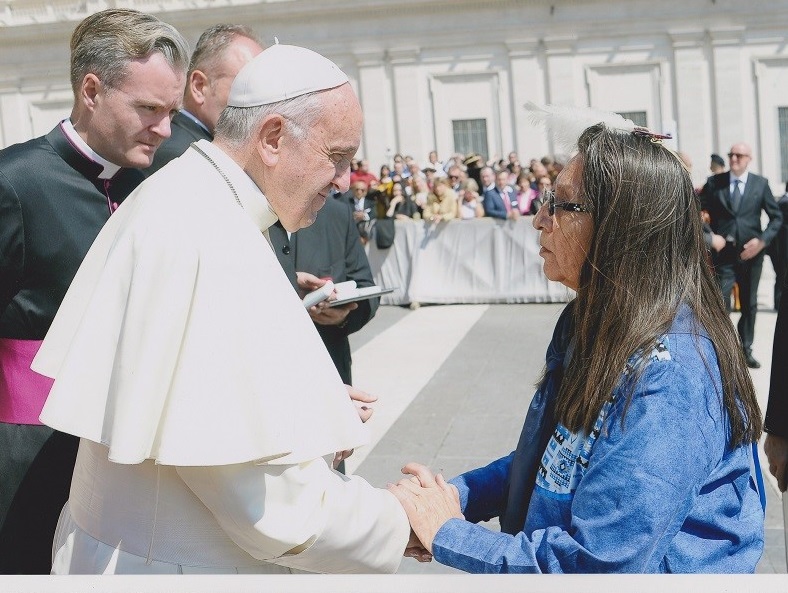 Loretta was one of 12 Native delegates collaborating with “The Long March to Rome,” a continuation of 40 years of movement to get the Vatican to address the papal bull of May 4, 1493, as representative of a series of 15th-century decrees that became a Doctrine of Christian Domination.

The doctrine called for pagan nations to be invaded, captured, vanquished, subdued, reduced to perpetual slavery, and for all their possessions and property to be taken away from them in order to benefit Western Christendom.

In 1832, the doctrine became enshrined in American law by a Supreme Court decision.

In 1992, the Indigenous Law Institute began a campaign to revoke the decrees, and issued a Joint Statement To The Pontifical Council For Justice and Peace. Loretta was among the prominent Native American activists who was a signatory on the statement.

The momentum generated by the statement resulted in the “Long March to Rome” gathering in 2016 which culminated in a face-to-face meeting with Pope Francis in St. Peter’s Square.

Speaking to His Holiness, Loretta stated: “Holy Father of the Catholic Church, my people have suffered for 523 years under Papal Bulls. Revoke, rescind, and do away with the May 4, 1493 Intera Caetera Papal Bulls, please.”

Loretta, and her husband Tom Kanatakeniate Cook, who oversaw Running Strong’s Slim Buttes Agricultural Development program on the Pine Ridge reservation for many years, are active in hosting Sun Dance ceremonies every year along with the Afraid of Bear, American Horse and Red Cloud “tiospayes” (extended family members). Loretta is the female Sundance Leader for the Afraid of Bear/American Horse Sundance. 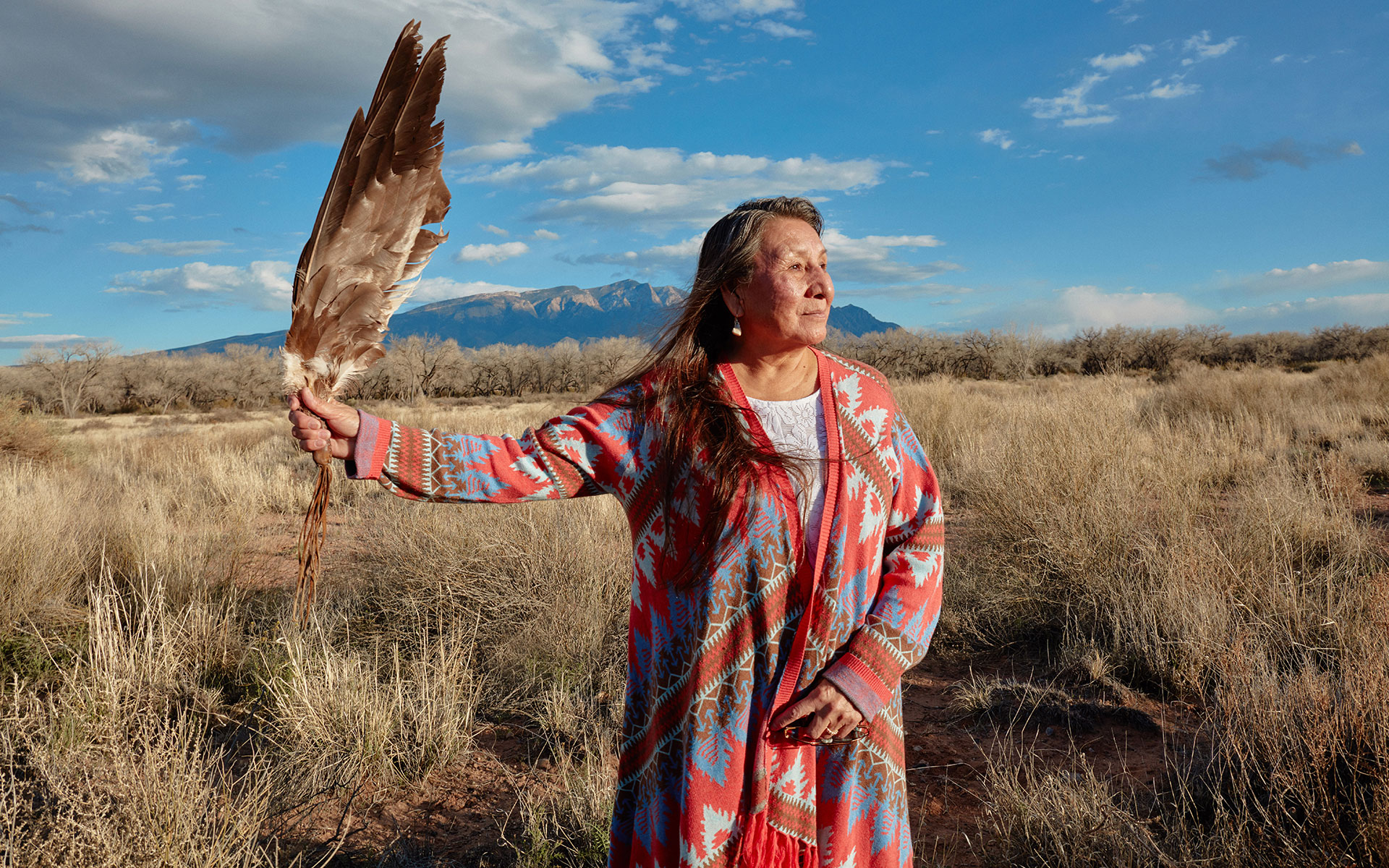 The traditional Sun Dance is held during the days immediately preceding the summer solstice at the Wild Horse Sanctuary in the Black Hills, which she and her allies have envisioned and maintained for many years.

It is Loretta’s and Tom’s belief that “kolas” (good friends of all races) are welcome to participate in the Sun Dances.

Loretta is also a “Fountain Visionary” of The Fountain, For the National Order of Our Existence.

As a Lakota Elder, Loretta lists being a grandmother as her top priority and since the arrival of her first grandchild, she has committed herself to ensuring that the world is a better place for him to grow up.

She is also described as “a keeper of her culture” as she is fluent in Lakota, serves as the cultural specialist for The Fountain, and is the only representative on the board of the Paha Sapa Unity Alliance Black Hills Reparation organization who speaks both Lakota and English perfectly.

Loretta also gathered and presented a consensus for the return of the Black Hills to the people of The Great Sioux Nation which was presented to the Obama White House.

“The Black Hills are not for sale,” states Loretta. “We want all the unseated lands in the Black Hills returned to the nine tribes of The Great Sioux Nation.” 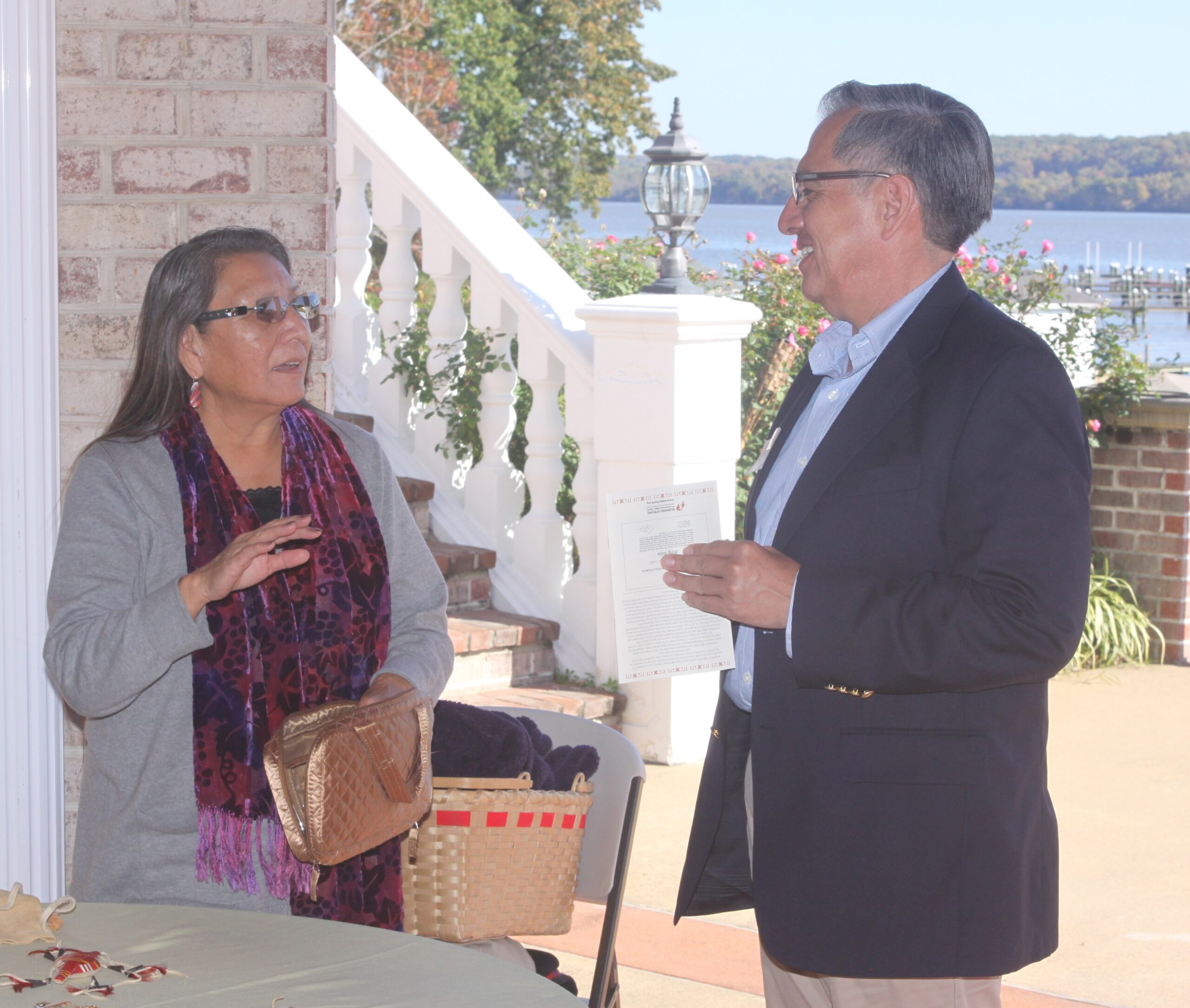 Most recently, in May 2018, Loretta received an honorary doctorate degree from the University of Alaska Fairbanks.

Loretta, who received an honorary Doctor of Humanities degree, grew up on Pine Ridge where she was immersed in the Lakota language, spiritual traditions and ceremonies, notes the UAF.

As an academic leader, she has taught throughout the world sharing her knowledge of the Lakota culture. Loretta also assisted in the passing of the 1975 Indian Self-Determination and Educational Assistance Act, the American Indian Freedom of Religion Act (AIFRA) of 1978 and amendments to AIFRA in 1994.

The UAF notes that Loretta has been active in numerous tribal and nonprofit organizations, such as Running Strong for American Indian Youth®, and participates in her husband’s community, the Mohawk indigenous studies program.

In addition to her role as a longtime Running Strong advisory council member, Loretta, working with Tom, have been instrumental in helping Pine Ridge families be able to grow their own organic vegetables and fruits.

She explained that they first explored the idea of offering a gardening program for families on the reservation, and then “spearheaded that effort to become something sustainable” along with improving the diets of the residents of the reservation.

“When Running Strong came on with the gardening program, and so we do what’s called a Lakota garden,” she said. “Lakota Spirit Gardening Program, that’s what it ended up, where you plant by the moon season, by the moon times.”

They were able to develop a process in which they gathered “that old ancient knowledge and put it back to use among our people.” As many as 600 Pine Ridge families have participated in the gardening program in a single summer on the reservation.

“And that’s the way it worked with our people,” she commented. “So, then we began addressing diabetes.”

She credits Running Strong for American Indian Youth® and Running Strong national spokesperson Olympic gold medalist Billy Mills who grew up on Pine Ridge and is also diabetic, with taking an aggressive, proactive approach in fighting the disease. 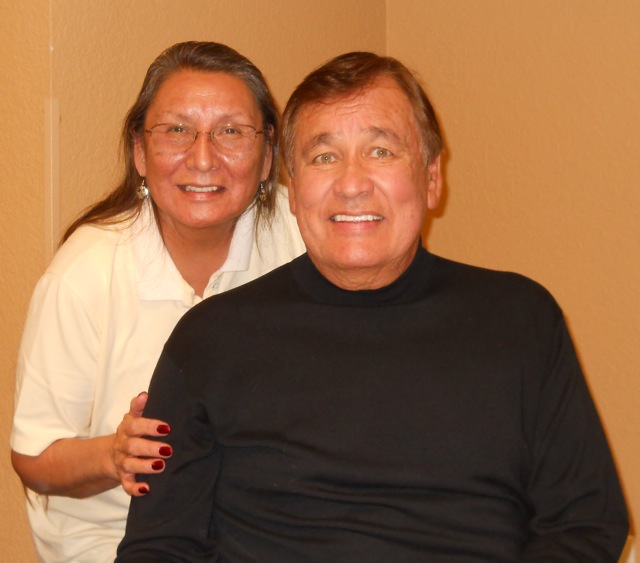 Loretta pointed out that the reservation residents with diabetes could relate more intimately with Billy in that he was facing the same challenge with the disease that they were, enabling them to be more open to changing their diet and growing their own organic food.

“It had a very profound impact on our people,” she said.

Throughout the years, as an individual and as a loyal partner of Running Strong, Loretta has dedicated her life’s work for her tiospayes, especially those who will be following in her footsteps when she is no longer of this Earth. 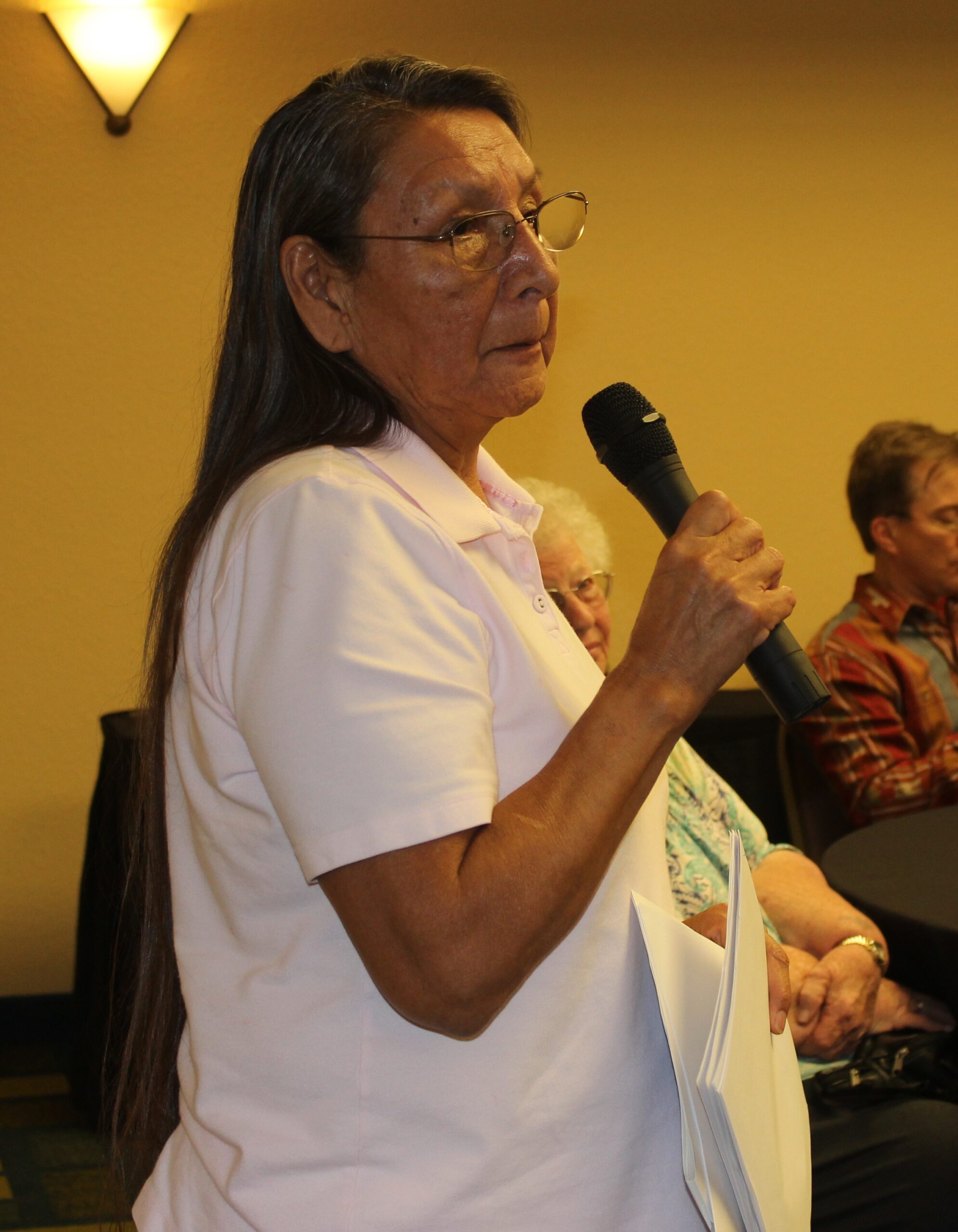 “I consider myself a culture bearer, a keeper of the old ways, and I say that because I became a grandmother. I have a beautiful grandson, and I think for him it’s important to know these things that we’re talking about.”