Dr. Thornton is using her grant as seed money to support choosing and purchasing books, in consultation and collaboration with the local Native community, for the Star School library, in support of the development of greater self-sufficiency and self-esteem for her Native students.

She reported in November about how utilizing the books she was able to purchase has changed the lives of many students at the school – especially that of one Ojibwe student in particular, Suzanne.

Dr. Thornton was assigned to be a long-term substitute for the American history class in which Suzanne is a student. 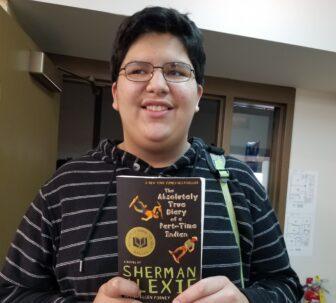 “Reviewing the sub notes, my heart sank to see that the class was using a traditional textbook-based Eurocentric American history curriculum, despite the fact that 40 percent of our students are Native and, in that particular class, 50 percent,” she told us.

“Instead of using the textbook, I used the grant to purchase several copies of An Indigenous People’s History of the United States for Young Readers and began using it to supplement traditional American history topics.”

One of the first sections she read to the students was on the topic of residential schools.

“Suzanne, after having previously sat completely silently through class, with her head down, suddenly piped up, ‘And they weren’t allowed to speak their native language! My grandma told me.’

“After this exchange, Suzanne’s head would come up every time I read a section out of An Indigenous People’s History of the United States for Young Readers.

“I’ve made a point of reading to the students sections about indigenous resistance movements, to convey to them a sense of hope and strength in the midst of so many devastating historical events.

“After I read a segment on the indigenous people of Hawaii and the Hawaiian queen’s brave resistance to U.S. business and political pressure, Suzanne’s hand shot up straight in the air, which was nothing short of miraculous, considering her previously withdrawn demeanor. 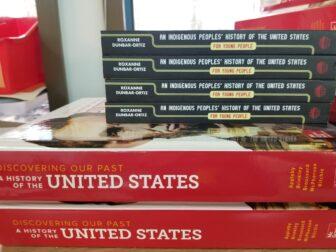 “Suzanne asked me, ‘So are you saying there are Native Americans in Hawaii?!’

“What followed was a lively conversation on the indigenous people of Hawaii and the annexation of Hawaii.

“That day, Suzanne stayed after class and led me to our Smartboard, saying she wanted to show me something.

“She then pulled up images of Ojibwe traditional dress and started explaining them to me.

“I believe this story shows the power of utilizing books written by indigenous authors.

“I believe that Suzanne’s change in demeanor, and the intense interest in history and culture that Suzanne showed, would not have occurred within the context of a traditional American history curriculum.

Dr. Thornton reported that two other of her Ojibwe students, 16-year-old Brett and Tyler, “were definitely helped by books by [Native American author] Sherman Alexie (Spokane-Coeur d’Alene) that I purchased through the grant.

“I like to give my students choice in the books they read and the activities they complete in class, so I played the first chapter of two different audiobooks for one of my classes so that students could decide which one they wanted to study.

“When I played the first chapter of Sherman Alexie’s ‘The Absolutely True Diary of a Part-Time Indian,’ read by the author, these two boys, who are often quiet in class and resistant to participating, literally sat up and took notice. 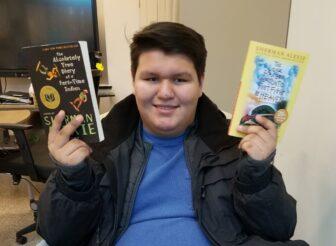 “They began to spontaneously comment, ‘He’s Native! He sounds Native!’

“’Yup, yup, that’s exactly what my life is like! He’s talking about my life!’

“They listened intently, nodding, laughing, and commenting throughout the entire first chapter as we listened in class.

“They could not wait to discuss the book and to tell me the ways in which the author’s experiences mirrored their own.

“Brett finished the book quickly and is now reading another book by Sherman Alexie.

“I have never seen these boys more engaged in an academic activity.

“Both boys have fairly good reading skills but are lacking confidence as readers and have tended to avoid reading.

“Both boys have become more confident and engaged readers through this experience.

Dr. Thornton says that “it’s been helpful to me to have the support of this grant not just for the monetary amount, which has given me freedom to make book purchases tailored for my Native students, but also for the moral support.

“This grant has lifted my spirits and made me feel valued as a teacher. Thank you so very much for your financial and moral support!”

And ultimately, her goal is to “write and implement a set of practices and policies for the Star School that ensures that purchasing and utilizing books by and for Native people, primarily in order to support and motivate our Native students, and secondarily in order to educate our non-Native students, that will become a routine and valued part of the Star School program.”