During these times of the coronavirus pandemic running rampant across the country, Running Strong for American Indian Youth has been working diligently to provide emergency relief on the Pine Ridge Indian and Cheyenne River reservations and the Navajo Nation, as well as applaud our Dreamstarters who have joined in the fight.

Right now, 44,200 pounds of non-perishable food items are on the way to our field office, Tipi Waste Un Zanipi (Wellness Through A Good Home) on Pine Ridge, enough for 1,700 families. Each food box contains 26 pounds of shelf-stable fruit, vegetables, protein and grains designed to feed two meals a day for a family of four for two weeks.

The delivery was made by a specialized transportation service to ensure as few points of contact as possible during the route and was approved by Oglala Sioux Tribe Authorities to be delivered directly to the warehouse and distributed following a mandatory two-day disinfecting period.

It is the second such emergency shipment following the distribution of 30,600 pounds of frozen food to the Eagle Butte Food Pantry on Cheyenne River in April.

In addition, the Navajo Nation has been particularly hard hit by COVID-19, having the highest per-capita infection rate of COVID-19 after New York and New Jersey “but has a fraction of the resources…and the spread is not slowing,” states a May 8 report in The Guardian. 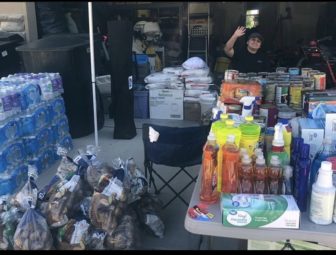 As of May 7, there were 2,757 confirmed cases for the Navajo Nation and the death toll stood at 88 — higher than 13 states — although the actual number of fatalities is likely to be much higher as the sickest patients requiring ventilators and intensive care are transferred to state hospitals, according to The Guardian report.

In response to an urgent request from our partner on Navajo Nation, Anita Begay, president of Today We Follow-Tomorrow We Lead, we have shipped a pallet full of Smile Strong dental kits, diapers for growing families with infants and toddlers — and most importantly — potentially life-saving hand sanitizer which is practically impossible to find on the reservation and expensive when available.

We also want to recognize the efforts of three of our Dreamstarters who are working to provide emergency food relief on the Navajo Nation.

2019 Dreamstarter Jacob Crane (Tsuuti’ina Nation), of Provo, Utah, reported to us on May 7 that next week he will be taking a shipment of 350 food boxes of Window Rock, Arizona, the capital of the Navajo Nation, and to the Goshute Tribe in eastern Utah as well.

On May 6, Jacob, a member of the American Indigenous Business Leaders group, was interviewed by ABC-TV 15 in Arizona about the organization’s efforts in stepping up to help ease hunger on the reservation.

“They are vulnerable people,” Jacob stated in the interview. “For the Native people, they’re wisdom keepers and they’re also the storytellers, but basically our indigenous libraries, and we can’t put them at risk.”

In addition, 2018 Dreamstarter Rose Quintana (Dine and Northern Ute) and 2020 Dreamstarter Shakotah Star Billie (Navajo Nation), both of Spanish Fork, Utah, have teamed up to do a donation drive for the Dennehotso community on the reservation. 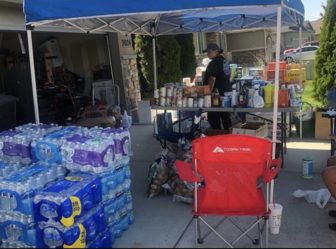 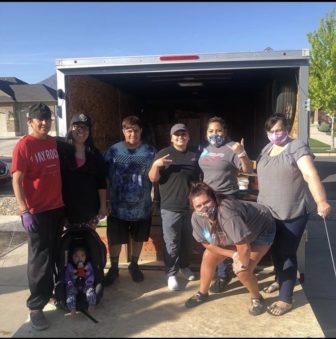 We applaud Jacob, Rose and Shakotah for their selflessness towards the dire circumstances facing the people of the Navajo Nation in these times of dire need.