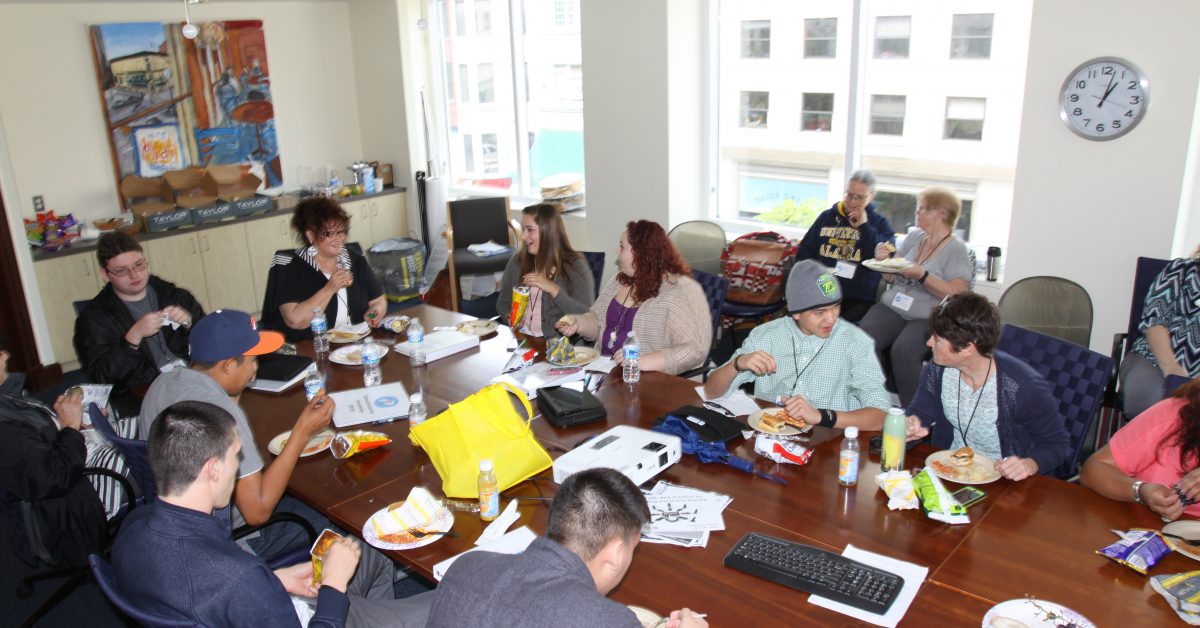 It was an amazing week of trainings, touring the city, and getting to know each other!

See more photos from the week in our Facebook photo album!

After they were finished, all of the Dreamstarters got tablets to help them report on their projects. They can use the tablet to take photos, write blog posts, and more!

On Monday morning we headed to Spitfire Strategies for trainings on being your own spokesperson and on digital media. After breakfast together we split into two groups and jumped into the trainings, where Dreamstarters learned tips like how to give a great elevator speech, and the Do’s and Don’ts of social media.

After the trainings and lunch we went back to the hotel where every Dreamstarter had the chance to workshop their grant with a Running Strong staff member, and then also had a chance to practice being filmed talking about their dream.

We wrapped Monday up with an Italian dinner & a night time tour of the monuments! We saw the Iwo Jima memorial, and then it rained HARD—even the Pacific Northwesterners among us didn’t want to get off the trolley. Luckily, it cleared up and we got to see the Lincoln Memorial, the MLK memorial & the FDR memorial to end the night. And we all wore trolley hats!

Tuesday morning we had a tour of the U.S. Capitol Building, thanks to the office of Congressman Beyer.

One of the special stops on the tour was the Speaker’s Balcony, which Noah Hotchkiss’s mentor Ann Marie Meighan set up. The view was amazing!

After the Capitol tour the Dreamstarters, mentors and Running Strong staff had lunch at the National Museum of the American Indian’s (NMAI) Mitsitam Café. We all enjoyed the Indian tacos, salmon, stuffed peppers & everything else the Café had to eat!

We ended Tuesday with a National’s game! The Nationals played the Cardinals. It was a nail-biter, with the two teams tied going into extra innings. The Nationals won with a walk off home run in the 10th!

On Wednesday, a surprise guest joined us for breakfast—Billy Mills! The Dreamstarters and mentors didn’t know they would see him quite yet, but Billy took the time to sit down and chat with our guests.

Then the Dreamstarters took turns pitching their dreams to Billy Mills on camera, with the AP filming!

Finally, we all gathered for a closing reception. The Dreamstarters each spoke about their dreams and we saw the progress they all made with public speaking during the week—everyone seemed so much more comfortable!

After the Dreamstarters, Billy came up and spoke about his experience fulfilling his dream, and the great potential our inaugural class of Dreamstarters have.

Then all of the Dreamstarters and mentors came to the front of the room and one by one, Billy and a mentor wrapped their Dreamstarter in a custom-made, limited edition Billy Mills Pendleton blanket!

After that we all mingled and said our goodbyes.

On Thursday morning all of the Dreamstarters and mentors went back to their communities to start their great work!