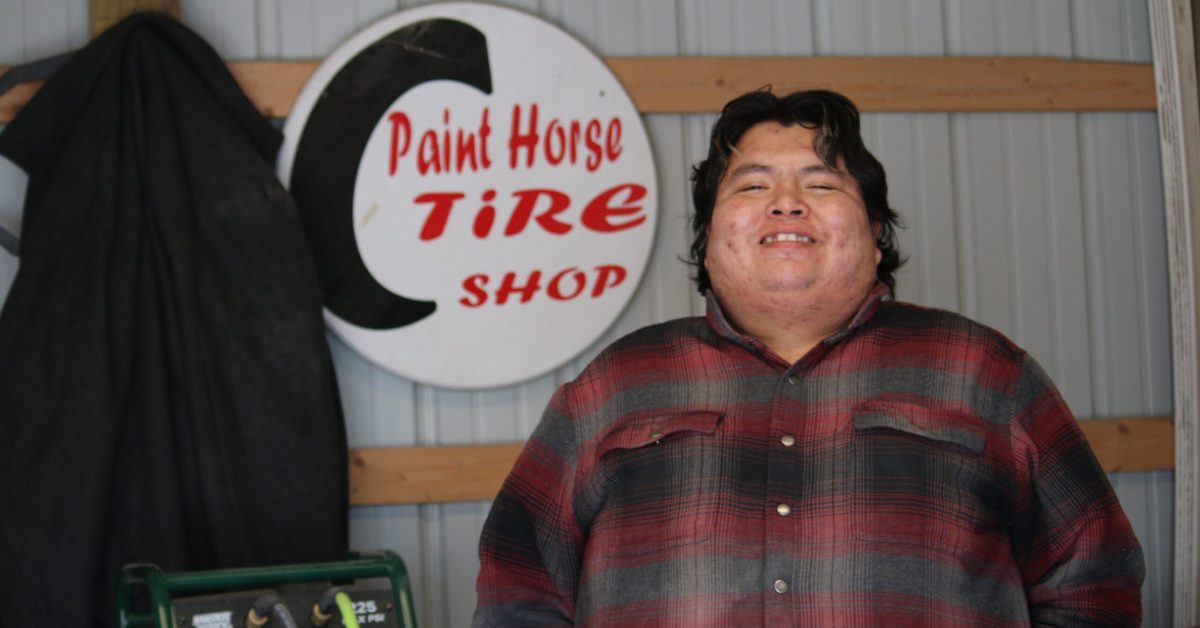 Dreamstarter® David Fraser follows in the footsteps of his great-grandfather

Running Strong for American Indian Youth® 2019 Dreamstarter® David Fraser (Oglala Lakota), 28, is realizing his dream of opening a tire repair shop in the community of Kyle where he lives on the Pine Ridge Indian Reservation in South Dakota.

In his Dreamstarter® application, he told us he wanted to be able to follow in the footsteps of his great-grandfather who had operated a tire repair business, which had been called “The Ol’ Door Shop,” because it was built using old doors he had collected at a dump.

“It’s always been in me since I was a young child,” says David.

After high school, David enrolled in the Vocational Automotive program at Ogala Lakota College in 2015 with an associate degree in automotive mechanics.

However, “because there is no work in our area, I moved to Rapid City (90 miles from his home) for work.”

After working at a tire store, starting as a trainee and then working his way up to tire technician where he worked for more than two years on all types of vehicles from small cars to SUVs and even heavy equipment vehicles, he determined “city living was not for me. I felt my services would be more beneficial for my people if I had the resources to open my own business.”

David’s dream remained just that for a time without the capital he would need to build a tire shop literally from the ground up.

Then in 2019, the theme of the Dreamstarter® program that year just happened to be entrepreneurship for Native youth and young adults, so David applied and was accepted into the program. With his $10,000 Dreamstarter® grant in hand, he began working to make his dream a reality.

Three years later, David is the proud founder and owner of the Paint Horse Tire Shop serving his fellow Oglala Lakota tribal relatives throughout the reservation.

Today, David still has even bigger dreams beyond operating a simple tire shop.

“I want it to be an expanded service,” he said in a recent interview.

“I want it to be an expanded service. I actually want it to be like a AAA. Like if you have a flat along the side of the road somewhere, I could drive up, take off your tire and service you right there. Bring you back, fix it, and put back on your tire.”

Previously, David reported that because the nearest tire stores are some 80 miles away, Pine Ridge families had no choice but to figure out some way to get to Rapid City to purchase tires and then have them installed.

“I want to make it more accessible for people. I want to be a little hub where they can buy their tires and buy their oil.”

And, as for his Dreamstarter® experience overall, David told us:

“It was a great learning experience and I like to thank Dreamstarter® and Running Strong for the opportunities. I’ve always been a fan of Running Strong. I just like to give them a shout out. This past summer it really did hit off. It was really great.”