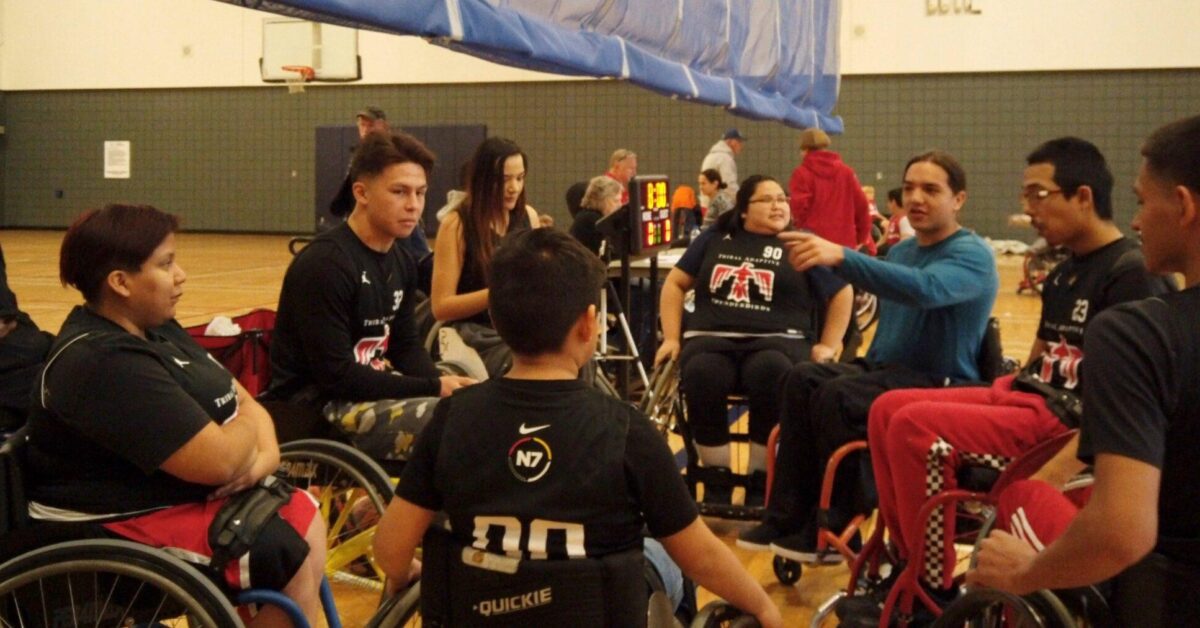 2015 Dreamstarter Noah Hotchkiss (Southern Ute/Southern Cheyenne/Caddo) was among the first 10 recipients of the Running Strong for American Indian Youth® Dreamstarter $10,000 grant which he used to help disabled Native American youth such as himself participate in wheelchair basketball camps to improve their health and self-esteem.

“I always say that people with disabilities are a unique minority because anyone can become a part of us at any time,” says Noah who lost the use of legs in 2009 at age 11 in a tragic head-on collision that left his mother dead. “So, having a sports program in place is really for the benefit of everyone in the community.”

Since then, Noah, now 22, has played for Collegiate Wheelchair Basketball programs at the University of Illinois, become an inspirational public speaker and mentor for Native American individuals and founded his own nonprofit, the Tribal Adaptive Organization (TAO), where he is its CEO.

On October 27,2020, Running Strong selected Noah as one of our five Dreamstarter Gold recipients each receiving a grant of $50,000 to enable him and the others to continue pursuing their dreams on a much grander scale.

Noah’s Dreamstarter Gold dream builds off his original Dreamstarter project by expanding, publicizing and creating a strategic masterplan for TAO and improving the lives of Native Americans with disabilities throughout Indian Country while continuing encouraging healthy, active lifestyles for Native wheelchair users via wheelchair sports clinics and teams.

Today, Noah is using his Dreamstarter Gold grant to build an educational curriculum with videos to do outreach to schools and tribal communities, developing the masterplan for TAO which includes expanding its board of directors to include four Native Americans with disabilities, expand its wheelchair basketball camp programs (which have been put on hold until its safe to do so again), and once again be able to travel to conferences when they are able to resume being held in person.

In November, Noah reported on two Native American teenagers who have benefited greatly through the support from his Dreamstarter Gold grant to TAO.

Starla, 17, of Shiprock, New Mexico, who was injured in a car crash when she was just 4 years old and has been in a wheelchair ever since, had never had the opportunity to participate in any physical activity.

In high school she was a good student but had not been exposed to the possibility of furthering her education. In fact, says Noah, “Her high school counselors just assumed that she would not go and that she needed a full-time caregiver.”

However, “since meeting Starla, she has learned about opportunities and seen our other participants achieve independence. Now she has a goal to play wheelchair basketball at the University of Arizona while she pursues her dream of becoming a doctor.

As for Starla herself, “basketball has really helped me become more active and be more outgoing and take me out of my comfort zone,” she says. “Being in a wheelchair growing up on the reservation is hard. There are no sidewalks you can go on and it’s rocky.

“When I went to my first basketball meet, I was scared and shy and Noah really helped me. He talked to me and told me that you know I’m not the only one. He really helped me out of my comfort zone and out of my shell.”

Keinan, 17, of Hardin, Montana on the Crow Reservation, was paralyzed from the waist down while attempting to prevent an assault on a young woman when he was shot by the perpetrator in 2020.

“We met Keinan at a ceremony in Wyoming and he immediately showed interest and enthusiasm for wheelchair basketball and track and field,” reported Noah.

“Prior to being shot, Keinan was a talented football player and his coaches considered him a possible collegiate recruiting candidate,” Noah told us, noting that the TAO was able to provide him with both a wheelchair for playing basketball as well as “a new everyday chair.

“We are also working with him virtually to begin learning the game and hope he will be able to come to a camp soon.”

Noah also noted that Keinan was the first athlete that the TAO was able to successfully connect with a Native American entrepreneur who has agreed to cover all of his travel expenses and competition fees.

“The sponsorship model is something we are hoping to expand to all of our athletes in rural areas where travel costs, etc., are prohibitive to them participating in athletics.”

And to the supporters of Running Strong who are helping to make Noah’s dream a continuing realty, he says:

“Your support has and will continue to change the lives of so many Native Americans with disabilities. There is no way we could have come as far as we have as quickly as we have without the support of Running Strong for American Indian Youth®.

“Our dream is growing and becoming a reality because of all of your love and support!”