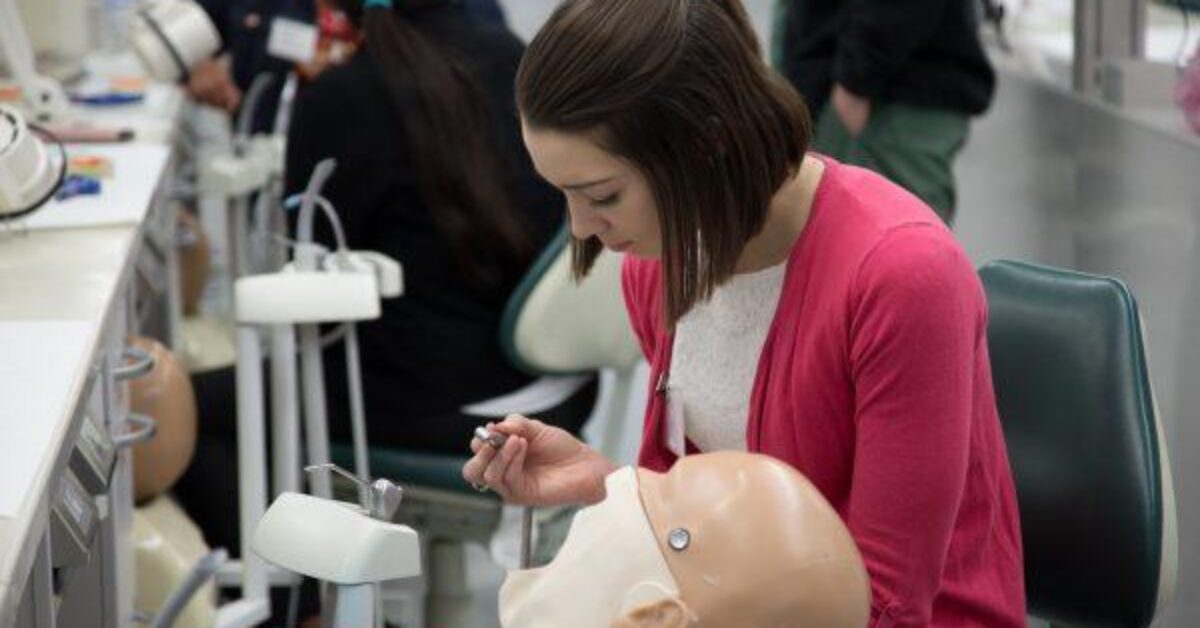 Six years after announcing the Running Strong for American Youth® Dreamstarter Program to enable Native American teens and young adults to help realize their dreams as did our national spokesperson Billy Mills (Oglala Lakota) did when he won a gold medal at the 1964 Tokyo Olympics, we launched a new initiative to help further our Dreamstarters’ and their mentor organizations’ goals: Dreamstarter Gold.

In 2020, we named the first five Dreamstarter Gold recipients each who received $50,000 grants to take their projects to the next level.

Among them is Dr. Cristin Haase, DMD, MPH, who, with her mentor organization, the A.T. Still University of Health Sciences (ATSU) in Arizona, developed her dream to host a Pre-Admission Workshop (PAW) for American Indian/Alaska Native (AI/AN) students interested in pursuing careers in the healthcare field.

Cristin, now Dr. Haase (Cheyenne River Sioux), was a dental student who had successfully navigated the complex application process to gain admission to dental school pretty much on her own, and wanted to help others do the same utilizing the knowledge she had gained to reach her goal.

The PAW has been held every year since 2015 at ATSU’s Arizona School of Dentistry and Oral Health with the support of the Running Strong Dreamstarter, and this year, Dreamstarter Gold programs.

While Dr. Haase is now busy with her practice providing dental care to Native children and families in another state, her PAW program lives on at the ATSU National Center for American Indian Health Professions under the leadership of director Dougherty Tsalabutie.

Dougherty reported in November that three virtual workshops were held in May, July and September 2021 benefiting members of the Navajo, Shoshone-Bannock, Cheyanne and Arapaho, and Muscogee (Creek) tribes.

Faculty and students from ATSU worked with and mentored “AI/AN youth interested in health professions to prepare them for the rigorous application processes for the following professional degree programs: doctor of dental medicine, doctor of osteopathic medicine, doctor of physical therapy, athletic training and physician assistant,” he told us.

He also recounted a story of how that is happening today with a previous PAW participant who is now a dentist serving Native children and families at Fort Totten, North Dakota:

“Recently, a young indigenous boy, 5-years-old from the Northern Plains, was suffering immensely from tooth pain.

“His single mother is unable to take time off work in order to provide food and shelter for him and his siblings.

“One day, he showed up to the Tribal Health dental clinic with swelling in his face and a mouth full of cavities.

“The provider there had given the patient antibiotics and referred this child to an outside provider that is 3 hours away.

“The mother had an absolutely hopeless look in her eyes, knowing that she did not have the resources or the time to get her child to this dental appointment.

“After all, this was his third round of antibiotics, and she wasn’t able to make the last referral.

“But wait, there is a new dentist at the clinic.

This new dentist is Native, and she knows how the system can make anything feel impossible.

“She took action to treat the child in-house, because she cared.

“She wasn’t scared that extracting an infected tooth on a 5-year-old would be a difficult procedure because she knew that he and his mother truly had no other option.”

Doughterty told us that this story is from one of ATSU’s recent graduates who attended the PAW in 2016 and shared her story with him during her first month on the job as a practicing dentist.

“The PAW not only impacts the individuals that become dentists but changes the mindset of care within entire tribal communities,” says Doughterty. “This child was able to get the access to the care he needed, because a provider – a Native dentist, understood the struggles of navigating our healthcare system.

“Truly, it may have saved his life.”

Doughterty was also excited to announce that another of the PAW attendees started dental school this year.

Her name is Dominique Yellowhair, who actually attended the PAW twice in 2018 and again in 2020, “and she plans to serve her people on the Navajo reservation upon completion of school,” he told us.

“PAW helped to guide her towards goals for a competitive dental school application years before she was ready to apply.

“And you know what? She was accepted on her first application.

“She didn’t have to spend extra years gaining experience or retaking courses, she knew exactly what was needed to be accepted, and PAW helped prepare her.

“There were 2,323 students competing for 76 seats, and she got one of those 76 seats. The odds are that only 3.3% of applicants matriculate to ASTU-ASDOH.  “And it’s similar at other institutions.

“We are super excited to follow all the successes of Dominique and the impacts she makes on her community.”

Dominique was featured on the National Public Radio member station KJZZ in Phoenix, Arizona in 2018, which reported that “Yellowhair is one of 12 students participating in a workshop at the Arizona School of Dentistry and Oral Health at A.T. Still University in Mesa meant to prepare Native Americans to apply for dental school” while a freshman at Dixie State University in St. George, Utah.

Dominique told KJZZ that she grew up handing out at the Indian Health Center in Northern Arizona where her mother worked and vividly remembers getting to watch a tooth extraction.

She also told KJZZ of her dream to one day go to dental school at ATSU and eventually student orthodontia – a dream she has since realized likely at least in part due to being able to attend the PAW workshops.

“When I become a dentist I want to maybe go back home and practice there at the Indian Health Center and give that duty back to the people of the Indian reservation.

“You have to return to your home.”

(To read the KJZZ story “Native American Students Drill  Down Into Dental School Prep In Mesa” go to https://kjzz.org/content/601169/native-american-students-drill-down-dental-school-prep-mesa

And as for Doughterty, notes that “the ability of AI/AN providers to relate and troubleshoot issues pertaining to care is exactly why we need more native dentists, and all of the other health professions too.

“We anticipate this will inspire other young people and family member to follow in the footsteps of workshop graduates, leading to the opportunity for future generation to finally experience equal representation for AI/AN people in healthcare career fields.”