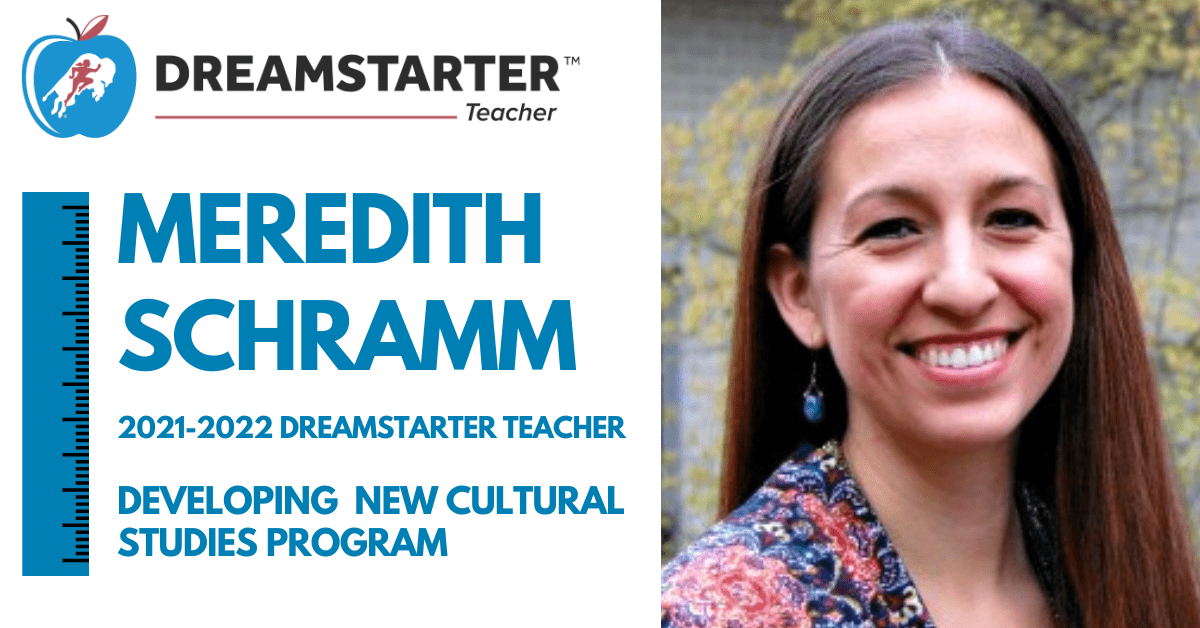 Today, she is working as a CTE (Career and Technical Education) teacher at Lehi Junior High School in Lehi, Utah, where she used her $1,000 Dreamstarter Teacher grant to purchase classroom supplies for a new Cultural Studies program she developed for her students at the school.

“The supplies were for projects that gave students hands-on experience with Native culture,” she reported this month.

Among the tribal nations served are the school are Potawatomi, Cherokee and Navajo, although she noted that non-native students also benefited from the program.

Meredith spent half of her grant funding to purchase books for a “Book Club” assignment and offered students the choice of three reading three books: “I Can Make this Promise” by Christine Day, “Indian No More” by Charlene McManis, and “Undefeated: Jim Thorpe and the Carlisle Indian School Football Team” by Steve Sheinkin.

“Students could pick a book and those who were reading the same book read together, talk, and answer questions that helped them learn about Native culture,” she told us.

With the other half she purchased 13 rawhide hand drum kits at the local Native American trading post.

“Students worked in groups to make and paint the drums, and they then nominated different teachers and gifted the drums to them,” said Meredith. “I was also able to purchase beading supplies for kids to make their own simple beaded loop earrings.

“The students were really engaged in the class and loved it. I think the kids learned a lot. And we were able to do some memorable activities that they will remember for a long time.”

While helping the Native students learn more about their own culture, she noted that “It also gave non-native students a chance to learn about the culture through a Native perspective and it broke down a few stereotypes that they previously had about Native culture.”

At the close of the semester, she surveyed her students about the class asking what was one of the things they learned about Native culture they didn’t know before and how did it change their view of the culture.

“I learned about boarding schools and how they were treated unfairly, and how most people still think that Native Americans wear feathers and hunt and eat raw animal, but they are just the same as us,” responded one student. “I think you can learn many things from people and their culture. I think one of the most important is the things they treasure and the things that are the most important to them.”

Another student said, “I had no idea how much the Native people suffered and how much they fought for their culture.

“Now I have a bigger respect for the Native people knowing they worked so hard for their culture.”

“I didn’t know that Natives were put in boarding schools,” responded another. “It makes me want to listen more to Native peoples’ experiences.”

Meredith acknowledged that creating a course from scratch was challenging but “It ended up being a labor of love.

“I was able to educate students the way I felt was respectful to the different cultures I talked about. We had a lot of hands-on activities that were fun and memorable.

“I loved seeing those kids who were of color in my class feel proud about their culture when we talked about it. I was able to get help from them about things they wanted to share, and what they felt was important. It became a classroom where students were able to respect each other for who they were.

And perhaps her greatest accomplishment of the new Cultural Studies class was that “it gave the students who were Native a voice. They were proud of their heritage.”