2019 Running Strong for American Indian Youth Dreamstarter Freddy Gipp (Apache Tribe of Oklahoma), 26, of Lawrence, Kansas, applied to our Dreamstarter program to encourage communities to host powwow celebrations to increase the economic and social impact of these communities through his dream project Powwow+.

“Powwow+ is an opportunity for communities to engage in new and innovative cultural programming from tribal, public and private entities,” he told us. “We encourage communities to host powwow celebrations at anytime.” 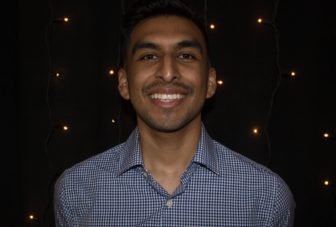 Before becoming a Dreamstarter, Freddy had already built up an impressive resume including serving as the president of the First Nations Student Association at the University of Kansas and as a recipient of the Man of Merit Award from the University of Kansas Emily Taylor Center for Women’s and Gender Studies, as well as serving as a policy and research intern at the Department of the Interior, Bureau of Indian Education in Washington, DC.

With his $10,000 Dreamstarter grant, Freddy organized The Young Professionals Powwow+, a competitive powwow designed to showcase up-and-coming dancers and singers while emphasizing the next generation who will be managing Native celebrations.

“It became Lawrence’s largest competitive powwow, surpassing all other celebrations in terms of fundraising for prize money and dancer and singer turnout,” he said.

In addition, Freddy hosted an Indigenous People’s Day Forum about a week before the City of Lawrence’s City Commission election.

“This was our community’s very first candidates’ forum that focused solely on indigenous issues in Lawrence,” Freddy told us, adding:

“Our powwow fulfills many social and economic initiatives that can jumpstart capacity-building efforts for Lawrence.

“I saw single fathers and mothers compete and were enthused to receive their awards for their hard work to travel here and dance, but most importantly — win.

“Powwows are selective and each dancer and singer makes a serious effort at perfecting their art and when they do — it’s full circle. We are happy to continue this, even if it’s only for a day and not the biggest powwow in the country.

“We want dancers and singers to know that we are working for their livelihoods, their careers and opportunities to have economic freedom while maintaining a healthy and active lifestyle.

“We know where we want to be and we are gradually getting there. More powwows equals a healthier and stronger Indian Country.”

And as for Freddy personally, “Becoming a Dreamstarter was one of the most powerful things in my lifetime.”