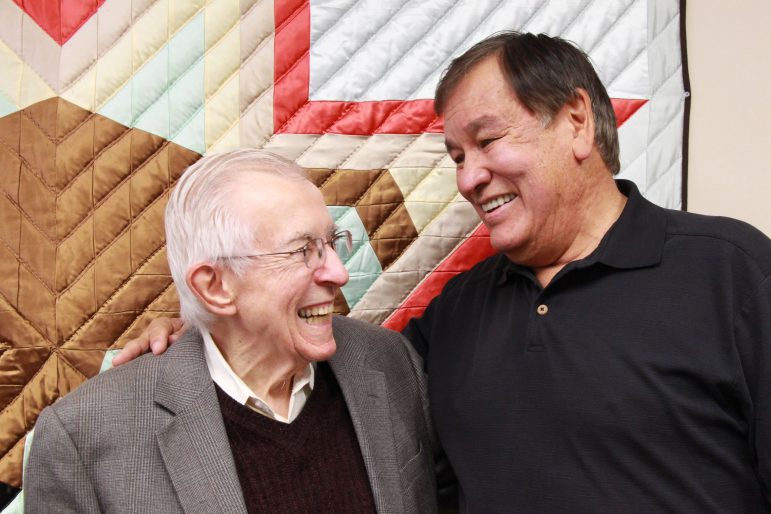 One day in the mid-1980s, Gene Krizek was flipping through the channels when he came across a movie on his newly cable-installed television: It was a film that would transform his life, and the life of tens, if not hundreds, of thousands of Native Americans throughout Indian Country from New York State to California to Hawaii.

Gene became enthralled by the movie, “Running Brave,” starring Robbie Benson as Billy Mills (Oglala Lakota), who had grown up orphaned and impoverished on the Pine Ridge Indian Reservation and who found peace through running.

The biographical film showed Billy’s tranquility and perseverance, even in times of great challenges, that led him to dream a seemingly impossible dream – to win an Olympic gold medal in long distance running. The movie depicted the hardships – including overt racism in the early 1960s – Billy overcame to become an All-American at the University of Kansas and ultimately achieve his goal at the 1964 Tokyo Olympics.

As the movie was ending, Gene’s wife, Addy, came into the room and saw him in tears and thought something terrible must have happened. But Gene quickly explained that he had just watched one of the most moving films he had ever seen.

Gene became determined that he must track down Billy Mills and recruit him to join him in his journey to found a nonprofit that would benefit Native American families on Pine Ridge and elsewhere and encourage Native youth to pursue their dreams, no matter the tremendous challenges they would inevitably encounter along the way.

When he was eventually able to connect with Billy, it didn’t take for them together to embark on a mission that would enable Billy to do ever since he had won his gold medal – and that was to give back to his Pine Ridge community and all those who had helped him since he was a young boy to achieve his dream.

Gene recalled that the first time he met Oglala Sioux Tribal Chairman Joe American Horse on the reservation, that Gene asked him pointblank: “What is it that your people need most?”

Before replying to the question, American Horse, responded in astonishment saying, “You’re the first White man who has ever asked me that.”

Then, he gave Gene a one-word answer – “Water.”

From then on, Gene’s mission became to do just that, first by helping to deliver it by the truckload to families living in the most remote areas of the vast reservation who would bring out any and every container they had to fill up with the precious water.

And Gene never forgot one day when he was in a truck that was pulling up to a home when a young girl came running out of the house in excitement exclaiming “Mommy, mommy! Now I can wash my hair!”

From then on Running Strong went from delivering water by truck, to drilling wells 200 feet deep into the Ogallala Aquifer, safe and clean from harmful contaminants such as lead and arsenic.

In 2015, Gene was overjoyed when Running Strong began our Mni Wiconi (Water is Life) program to begin connecting families to the Oglala Sioux Rural Water Supply System main water service line which runs through the reservation.

Over the next 30 years, Running Strong opened a field office, Tipi Waste Un Zanipi (Wellness Through A Good Home) and hired Oglala Lakota field staff members to use as a base of operations for the distribution of food including boxes of nonperishable food items as well as frozen turkeys for the holidays, school supplies, winter coats, boots, and toys for children for Christmas.

With the partnership of the Oyate Teca Project, Running Strong was able to expand programs to include helping to keep cultural traditions alive.

In addition, with Running Strong’s support of gardening programs offered by Slim Buttes Agricultural Development and Oyate Teca’s Medicine Root gardening courses, hundreds of Pine Ridge families have been able to overcome the challenges of food insecurity on the reservation.

All this is being done today due to Gene’s vision, his determination and dedication for providing critical assistance for the Native American youth and the communities they live in.

Running Strong for American Indian Youth® was born and today is one of the finest charities in America. In the Lakota language, there is no word or expression to say goodbye. We just express farewell. So, my friend, we will see each other again. Until then, if I may use the Olympic motto: Swifter, Higher, Stronger and with God's speed, with God's speed.

MAKE A GIFT IN MEMORY OF EUGENE LAD KRIZEK