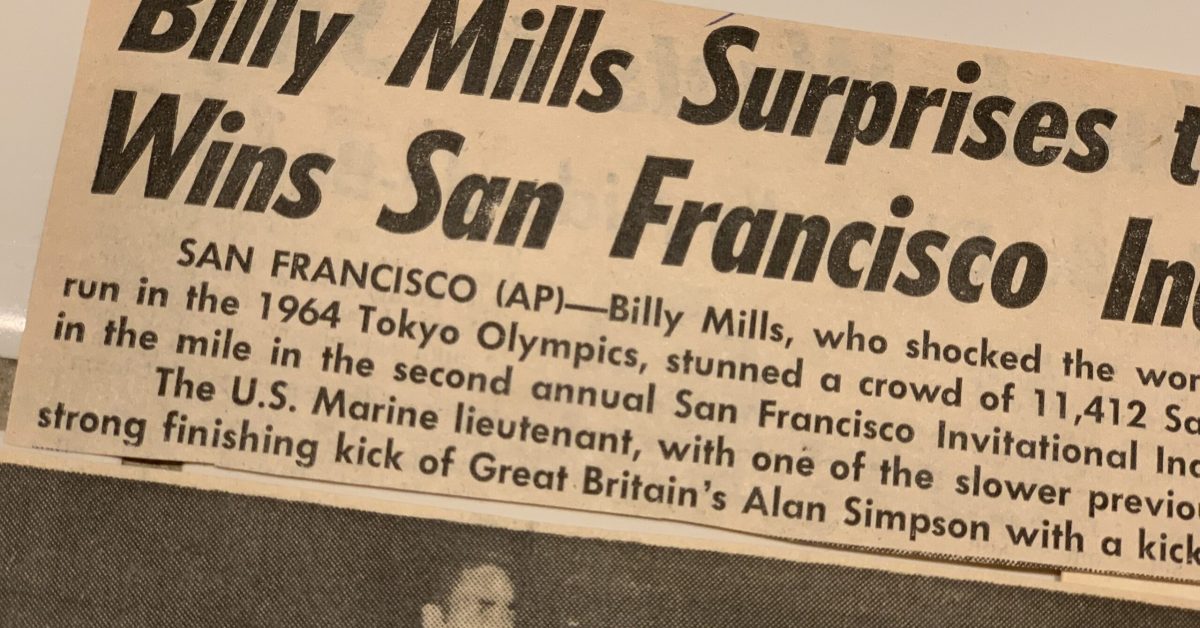 “I needed the thrill of competition, but more important, the victory because of decisions soon to be made…” | Road to Tokyo by Billy Mills 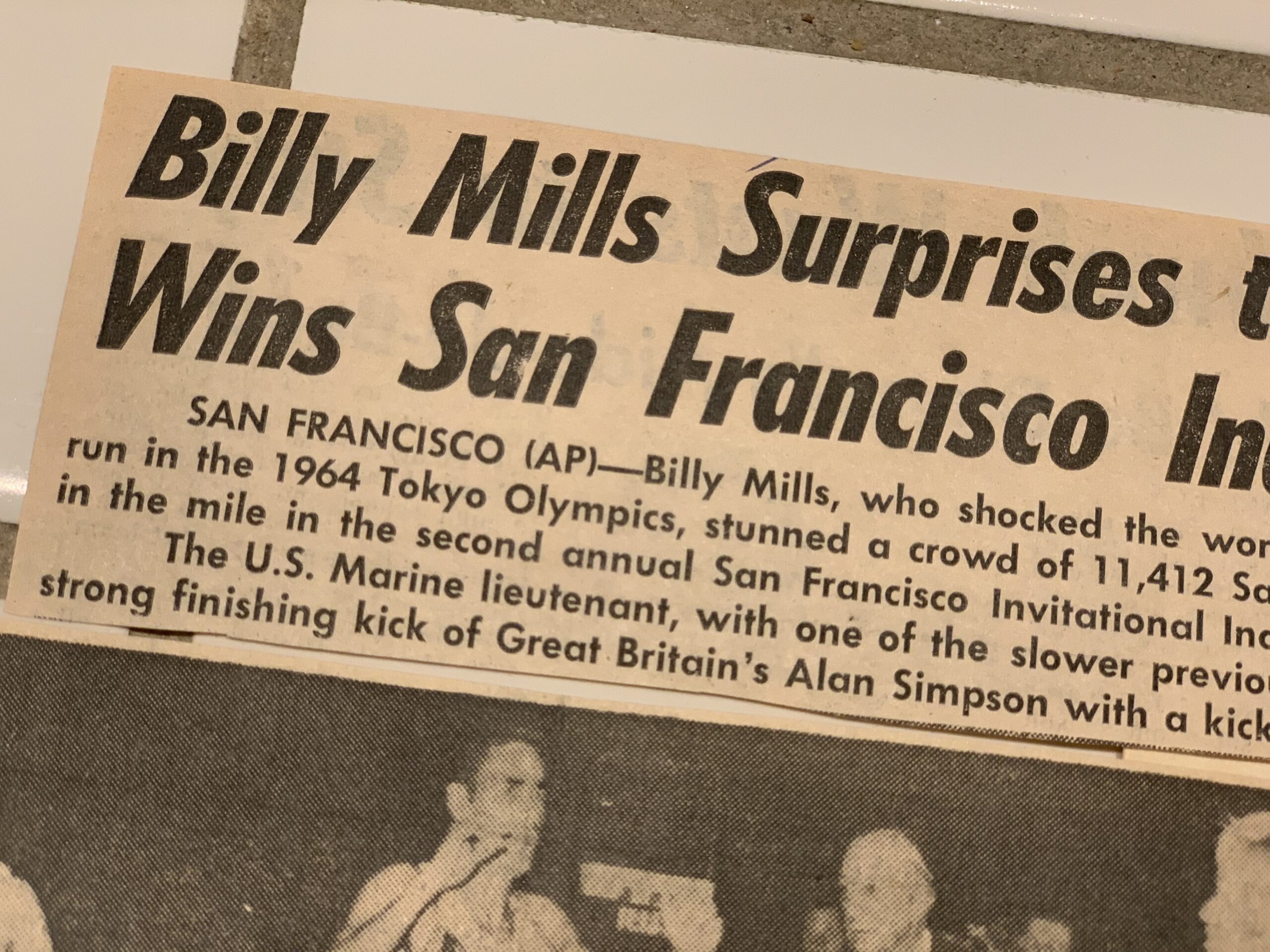 My 1965 track season started on Jan 9 at the San Francisco Invitational indoor track meet.  I won the one-mile run competing against a star-studded field of several sub 4-minute milers.  Favored to win was Allan Simpson from England.  He is noted for having one of the strongest finishes in the world.  He was 4th in the 1500 meters at the Olympics last year.  The former American 1500 meter record holder, Cary Weisiger, is always competitive and seems to perform his best when the competition is the strongest.  Archie San Romani from Oregon has some impressive sub 4 minute times, but like me, is unaccustomed to running on the indoor board tracks with the high banked curves.

The race was going to be strategic with the elite milers relying on their speed down the finishing stretch.  The key is when to start your final drive and this can vary from runner to runner.  My strategy was limited, I had to go to the front and find the right pace.

The starter fired the pistol and we were off.  The elite milers started slowly, wanting someone else to lead.  I moved to the front and increased my pace.  They let me build a 15-yard lead.  I wanted to find a pace allowing me to still keep a comfortable lead while maximizing my finishing kick.

Lap after lap they let me lead, confident their speed would quickly draw me in.  My thoughts were “When should I start my kick?”.  Once you start you have to be able to hold it to the finish.  With 300 yards to go, I started kicking.  They were not expecting it so soon.  They let me go and I built another 4 yards to my lead.  Is it possible my lead now can allow me to hold them off to the finish?

The fans exploded into a loud cheer and were on their feet.  The elite milers started their kicks, displaying impressive power in their pursuit of me.  The board track is vibrating, caused by the pounding feet of someone rapidly closing on me. 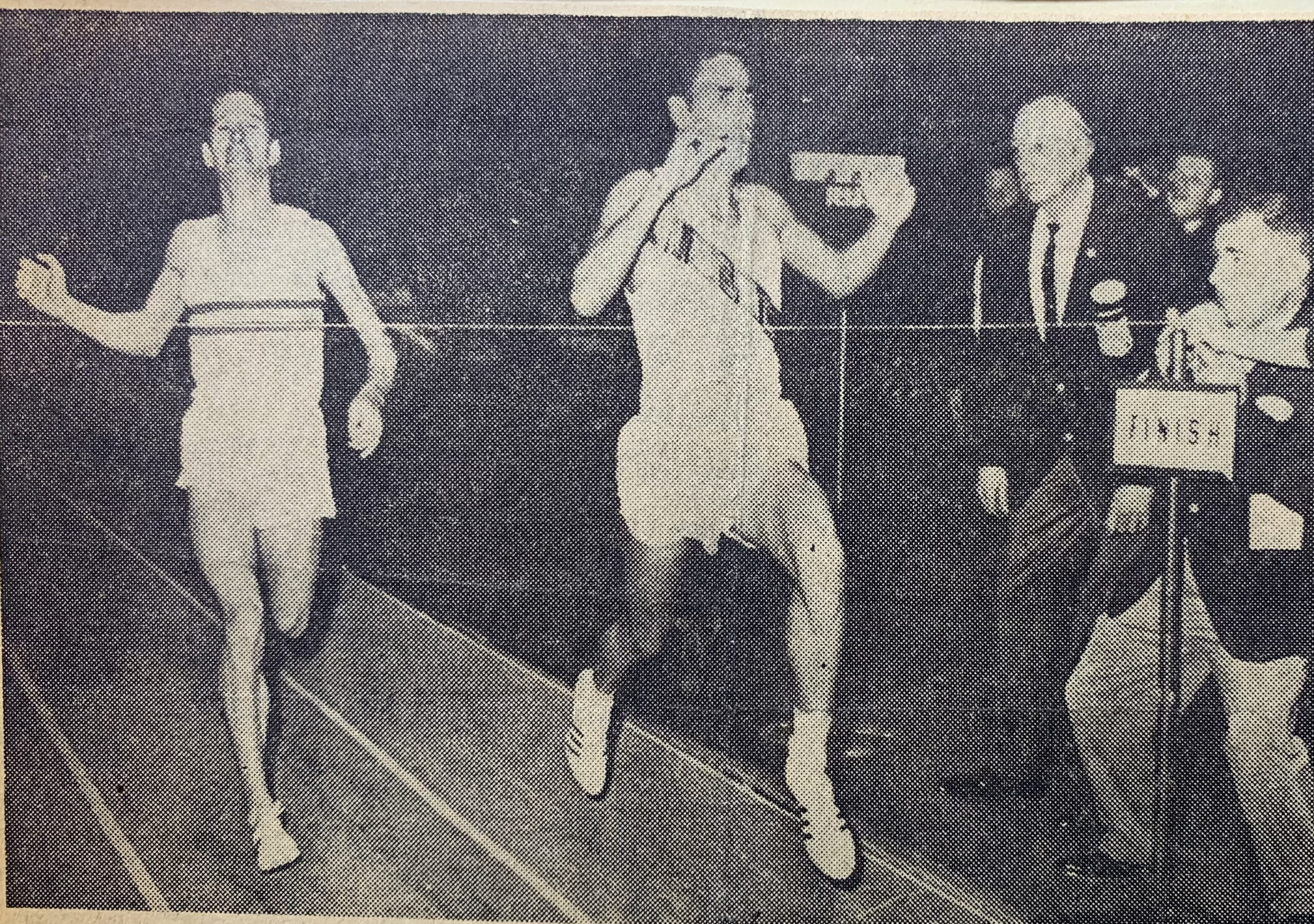 The finish line is drawing near and my eyes are focused on it.  30 yards, 20, 10, 5 yards.  I am trying to lean forward.  My chest touches the finish line tape as a shoulder appears on my right and one stride later, Simpson of England passes me.  I win by a fraction of a second.  The time is slow, 4:08.1, but typical in a strategic race.

I needed the thrill of competition, but more important, the victory because of decisions soon to be made.

It has been extremely challenging to prepare for the 1965 season because of the busy and hectic public relations schedule the Marine Corps committed me to.  Falling behind in my training is increasingly stressful and taking its toll.  My mind is thinking backward instead of forward, consistently filling me with an all-consuming thought:  “I should have retired right after winning the Olympic 10,000 meter Gold Medal.”

I gave Coach Thomson a call, although officially he is no longer coaching the Camp Pendleton Marines.  He said to meet him at the track this afternoon.

While sharing my thoughts of retiring from competition with Coach, my emotions  (a display of fear he is going to be disappointed in me), with the sunlight reflecting off his face, he broke into a smile, squinting, he replied,  “Perhaps the news I have just received will help you refocus and start thinking forward about racing again.”  He continued, “The three goals you set for your career:

Have just become a lot closer!  Billy, the world rankings for 1964 have just been announced.  You are ranked # 1 in the world for the 10,000 meters.  My congratulations, Lieutenant Mills.”

The news took my breath away.  And, of course, Coach Tommy, after years of coaching at the US Naval Academy knew just the exact amount of formality to make a young inexperienced Marine Lieutenant feel special.  He inspired me or perhaps gently led me to the inspiration that was already deep within me, waiting its re-awakening.

With gentleness, he showed sincere belief in my strength and ability to refocus and make a new commitment to one goal for the 1965 track season: either setting a new world record in the six mile at the USA National Track and Field Championships on June 27 in San Diego California, or a new world record in the 10,000 meter run on July 31st at the dual meet between USA and USSR (Union of Soviet Socialist Republic) in Kiev, Ukraine.

With a smile of respect and patience, Coach listened to me talk about my desire as an Olympian to experience and connect, if just for a moment, in body, mind and spirit to the Greek mythology that is etched into the ancient Olympic Games mythology from time immemorial and the modern Olympic Games lore.  Somehow I feel all of this is analogous to the ancient Lakota culture, traditions and spirituality.  It relates to my Lakota give-away.  It is fascinating to me and gives me a clearer picture of my Lakota give-away, which is slowly maturing into empowering the visions of the elders and inspiring the dreams of our youth while promoting my Olympic theme of global unity through the dignity, character and beauty of global diversity.

As I finished my comments, Coach Tommy, deep in his own thoughts said, “Billy, you will never regret staying the course and a world record can only strengthen your credibility as a world class athlete.”  His final words were:  “I believe you have a world record in you, Billy.”  We shook hands, I thanked him and we parted.

It is Friday evening, February 19, 1965 here in New York City.  There is an excitement that only a sports event held in Madison Square Garden can produce.

We are ready for the USA National Indoor Track and Field Championships three-mile race. It will be the first true test of my conditioning level.  For the past two months I have been comfortable coaching myself, but I do miss Coach Tommy Thomson.  His presence was always reassuring.  Frequently I am asking Patricia for her opinion or to confirm mine.

I may as well call her my coach.  She said several times how mental training and competition seems to be. And added: “Please don’t call me your coach, but being your psychiatrist fits perfectly”.  My smile tries to hide how perceptive I think she is.

We are called to the starting line.  The starter gives the command as he raises the pistol.  He fires and the USA indoor three-mile championship race is underway.

Wanting to start out under American record pace, I sprint to the front.  Racing indoors on the shorter tracks, 11 laps to the mile and banked curves, makes the races very intimate, as if the fans are on the track with us.

Ellis again makes several attempts to pass me, but each time by gently increasing my pace ever so slightly he backs off.  He is conveying to me he doesn’t want a faster pace.  With one lap to go I start a hard drive, my lead increases.  Breaking the tape, I glance toward the timer’s clock.  It reads 13:25.4, a new American indoor three-mile record.  My confidence for a six-mile world record in June and the 10,000 meter world record in July soars! 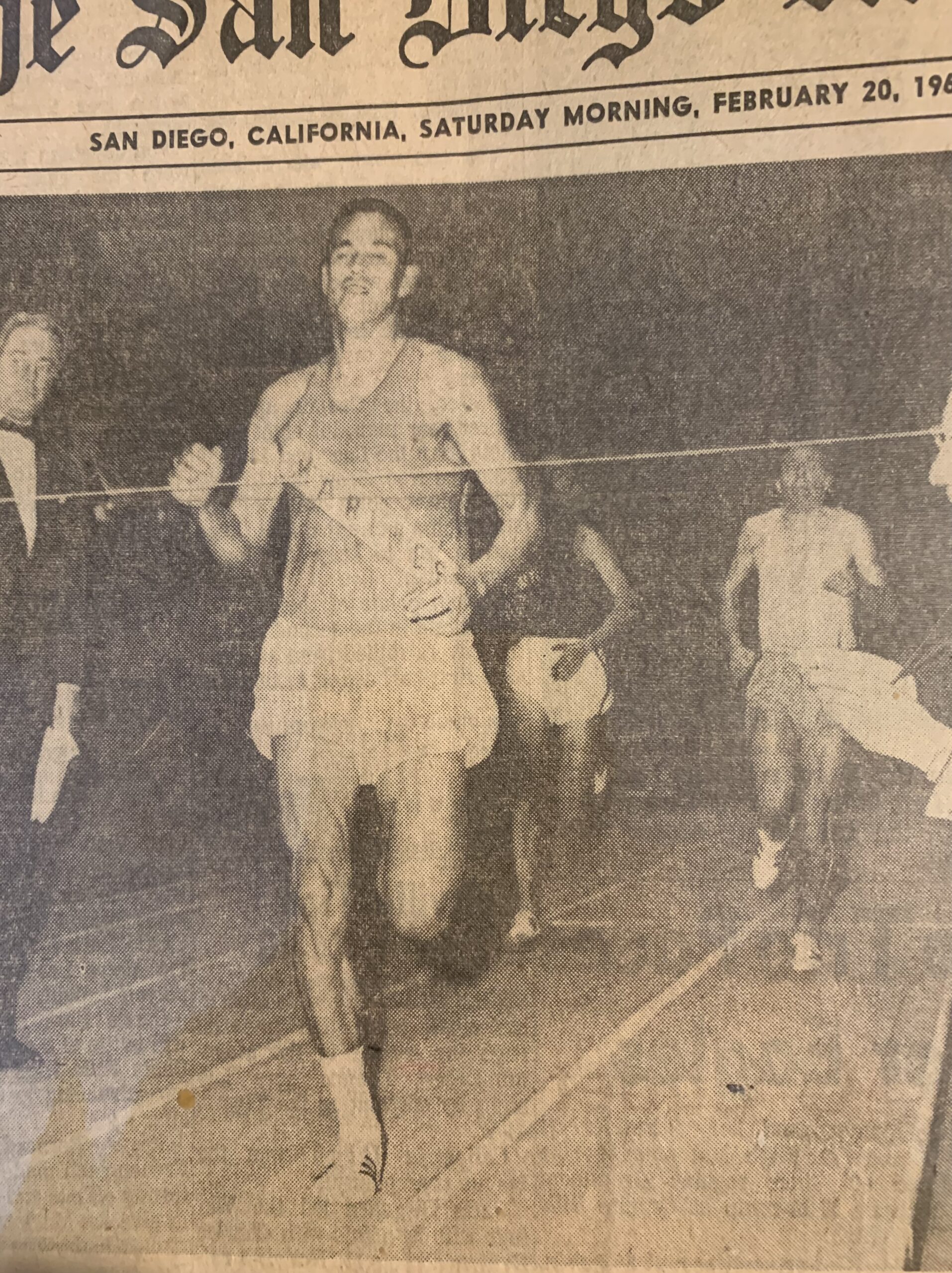 Frank Pflaging proved to be a very tenacious competitor and finished third.  He and I qualify for the USA team to compete indoors the first of April against the British National Team in Wembly, England and then on to Germany to compete against their national team in West Berlin.

It’s Monday, February 22nd and I am back home.  Patricia and I are celebrating our new American indoor record.  We are at the Officers Club and enjoying a steak and lobster dinner.  The evening is relaxing but the atmosphere is one of uncertainty.  At some tables, the conversations centered on Vietnam.

Patricia and I don’t discuss it, but we are both wondering how long before we (the Marine Corps) are totally committed there.  I mention my hope we can make it to the USA National Track and Field Championships and my world record attempt.

Patricia takes advantage of the opportunity to change our private thoughts by telling me about her phone call from Marine Corps Special Services at Camp Pendleton.  “A request came in for you to compete in a cross country meet in San Vittore Olona, Italy on March 28th.  The Marine Corps Special Services would like you to accept it.  They have already given their okay and sent it on to the USA AAU headquarters.”  With a beautiful smile, she said it’s for two people and with a laugh:  “You get to go with me!” 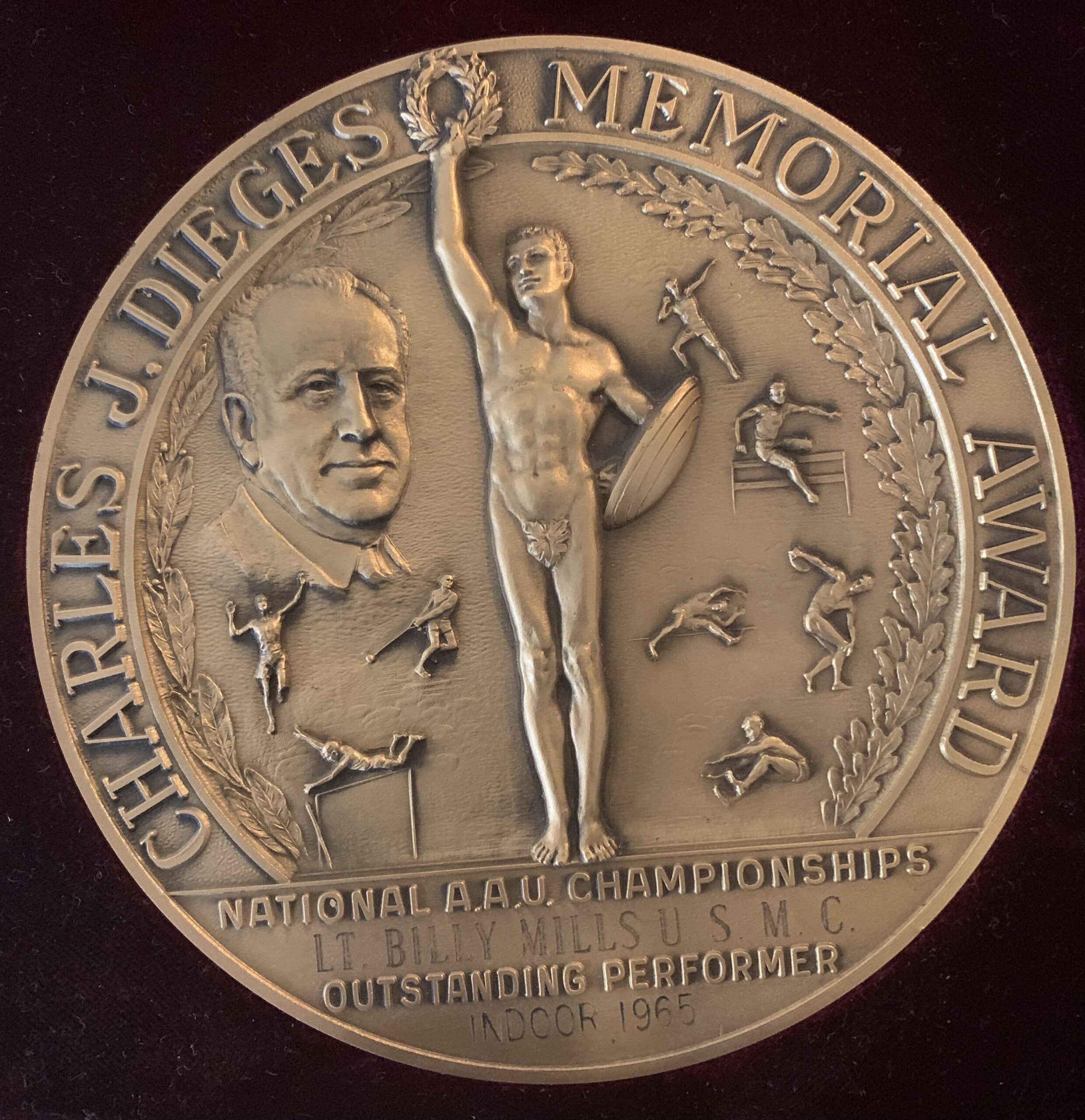 We found out the cross-country race in San Vittore Olona, Italy is called Cinque Mulini (Five Mills).  We run through five wheat mills during the course of the race, jumping over ditches, etc.  It is rapidly becoming one of the most prestigious cross country races in Europe.

Little did we know the drama our acceptance would cause.

See you next month in San Vittore Olona, Italy.