Running Strong is building up the next generation of Native American leaders and strengthening Native communities in a wholistic way – meeting critical needs, preserving culture, and supporting dreams. We are committed to building the capacity of local Native communities so they are well equipped to respond to the challenges they face. RS accomplishes through its dynamic programming: clean running water connections, organic community gardens and healthy food box programs, emergency utilities and home repair assistance, cultural and language revitalization, and investment in the future of Native youth through support of their education, mentorship and dreams. 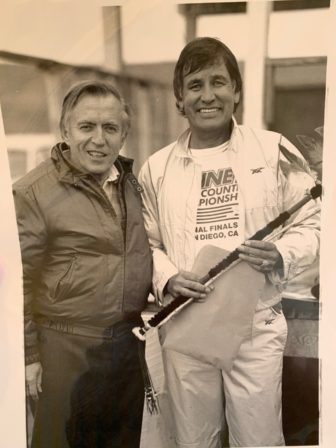 In 1986, Billy Mills (right) joined forces with Eugene Krizek (left) to help found Running Strong for American Indian Youth® under Christian Relief Services.  After Billy Mills (Oglala Lakota) became the Olympic champion in the 10,ooo meters in 1964, he made it his priority to give back to his community and create a better future for Native American youth.

Running Strong’s work began primarily on the Pine Ridge and Cheyenne River Indian Reservations in South Dakota, but over the years our service population and programming expanded dramatically.  Today we are proud to serve Native American over 30 rural and urban Native American communities throughout the United States.