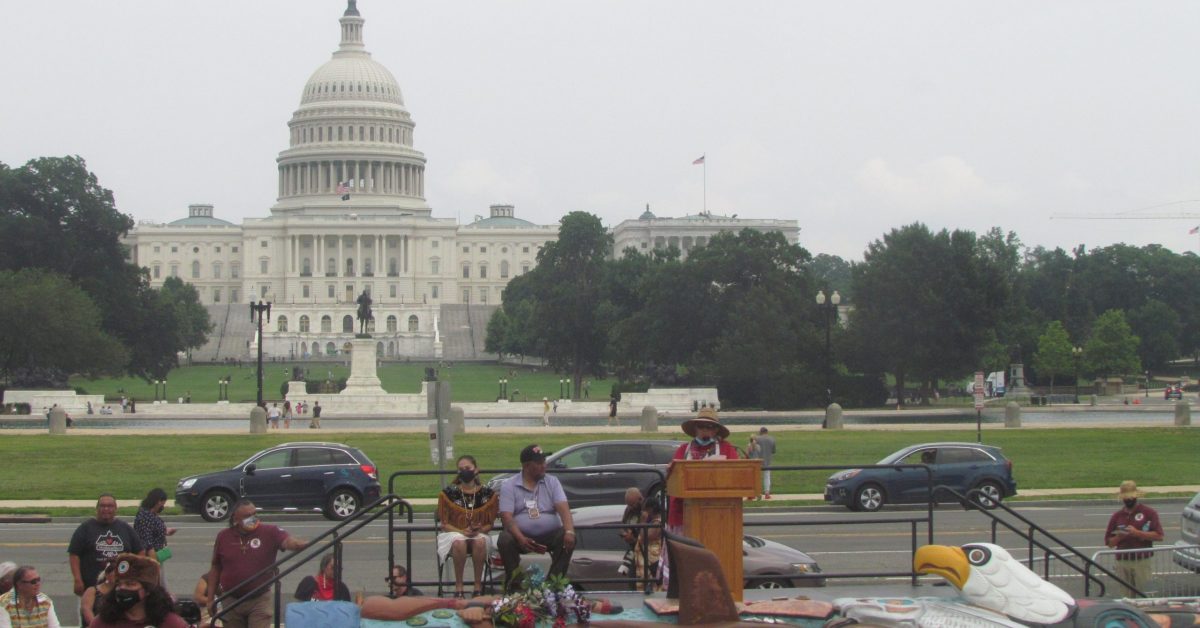 Running Strong for American Indian Youth® is proud to have been a supporter of the Red Road to DC, “A Totem Pole Journey for the Protection of Sacred Places” which began in April in Washington State and culminated in Washington, DC, on July 29, 2021. 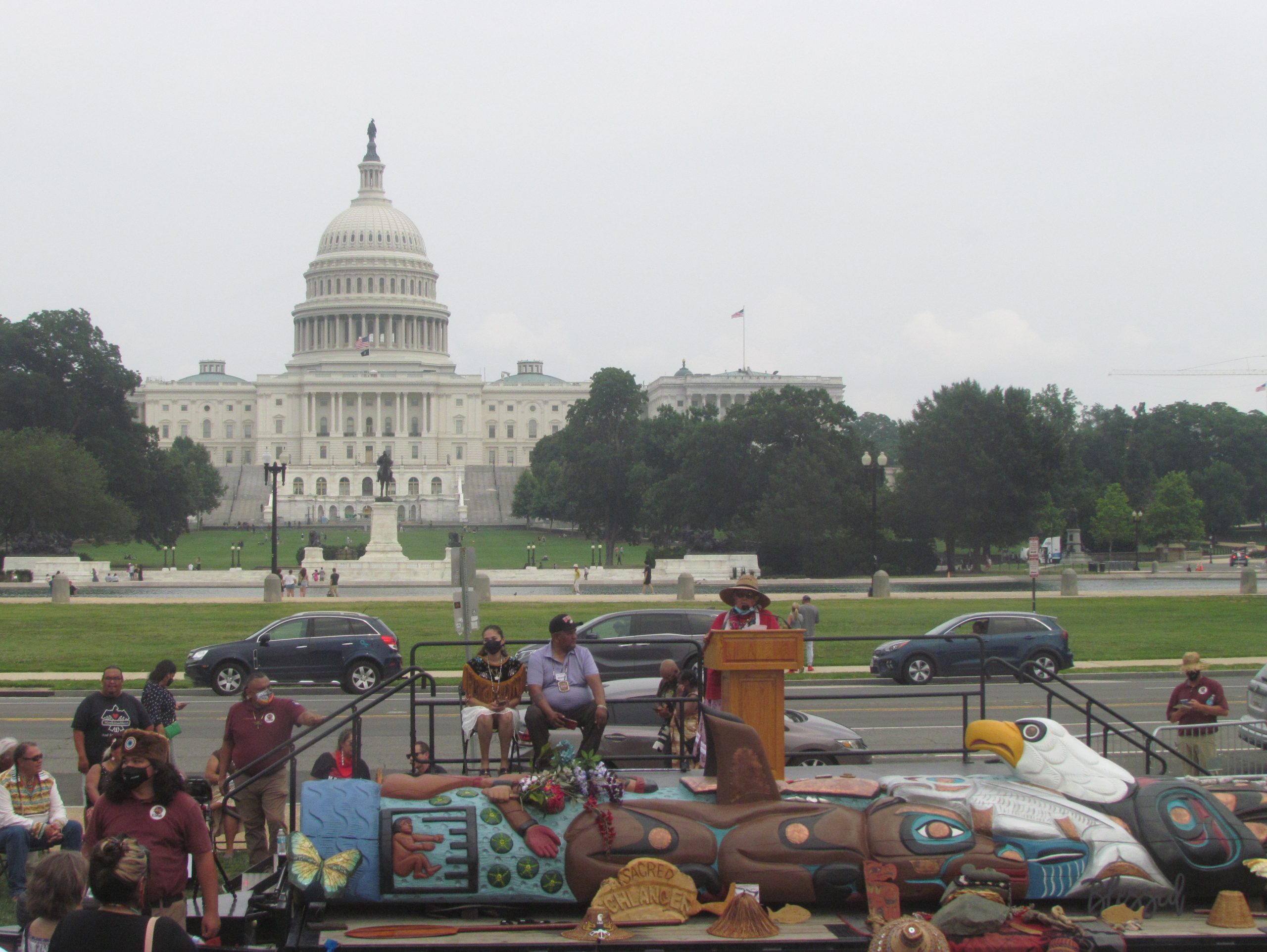 The 25-foot, 5,000- pound totem pole was carved from a 400-year-old cedar tree by the House of Tears Carvers of the Lummi Nation who transported it 20,000 miles through more than 100 communities to raise awareness of Indigenous sacred sites at risk from oil, gas, mining and infrastructure projects.

After making stops throughout the Pacific Northwest, California, Florida, and numerous stops in between, on July 14, the House of Tears Carvers and a caravan of activists began the Red Road to DC, an eight-stop tour of some of the most well-known sacred sites across the country, before arriving in Washington, DC, where they have brought the totem pole as a gift to the Biden-Harris administration and to urge the immediate protection of Indigenous sacred sites.

In addition, at the Blessing Ceremony on the National Mall, Red Rock to DC organizers presented a petition with more than 75,000 signatures to Secretary of the Interior Deb Haaland (Laguna Pueblo) urging the protection of Indigenous sacred sites throughout Indian Country such as Bears Ears in Utah, Chaco Canyon in New Mexico, the Black Hills of South Dakota, and others.

Running Strong teamed up with our longtime partner, the Brave Heart Society, headquartered in Lake Andes, South Dakota on the Yankton Sioux Reservation, to support the Red Road to DC when it stopped at the Standing Rock Sioux Tribe Reservation in North Dakota for a blessing ceremony on July 24.

“Today, we invite you to join in our return to Standing Rock and our blessing ceremony as we continue to stand with frontline communities to protect the sacred, to honor the treaties and to press on our journey to draw attention and action to sacred sties and Indigenous rights,” the Brave Heart Society posted on its Facebook page.

“In the middle of miles and miles of brown flatlands on the Standing Rock Indian Reservation near Cannonball, North Dakota, a sprawling camp of tepees, tents, and RVs appeared in the Summer of 2016. Members of more than 300 Native Nations and several thousand supporters arrived, joining in an unprecedented alliance against the proposed Dakota Access Pipeline (DAPL), which was set to cut through Sioux territory and across the Missouri River despite strong tribal opposition. The DAPL risked jeopardizing the primary water source not only for the Standing Rock Sioux Reservation, but also for 17 million people downstream. 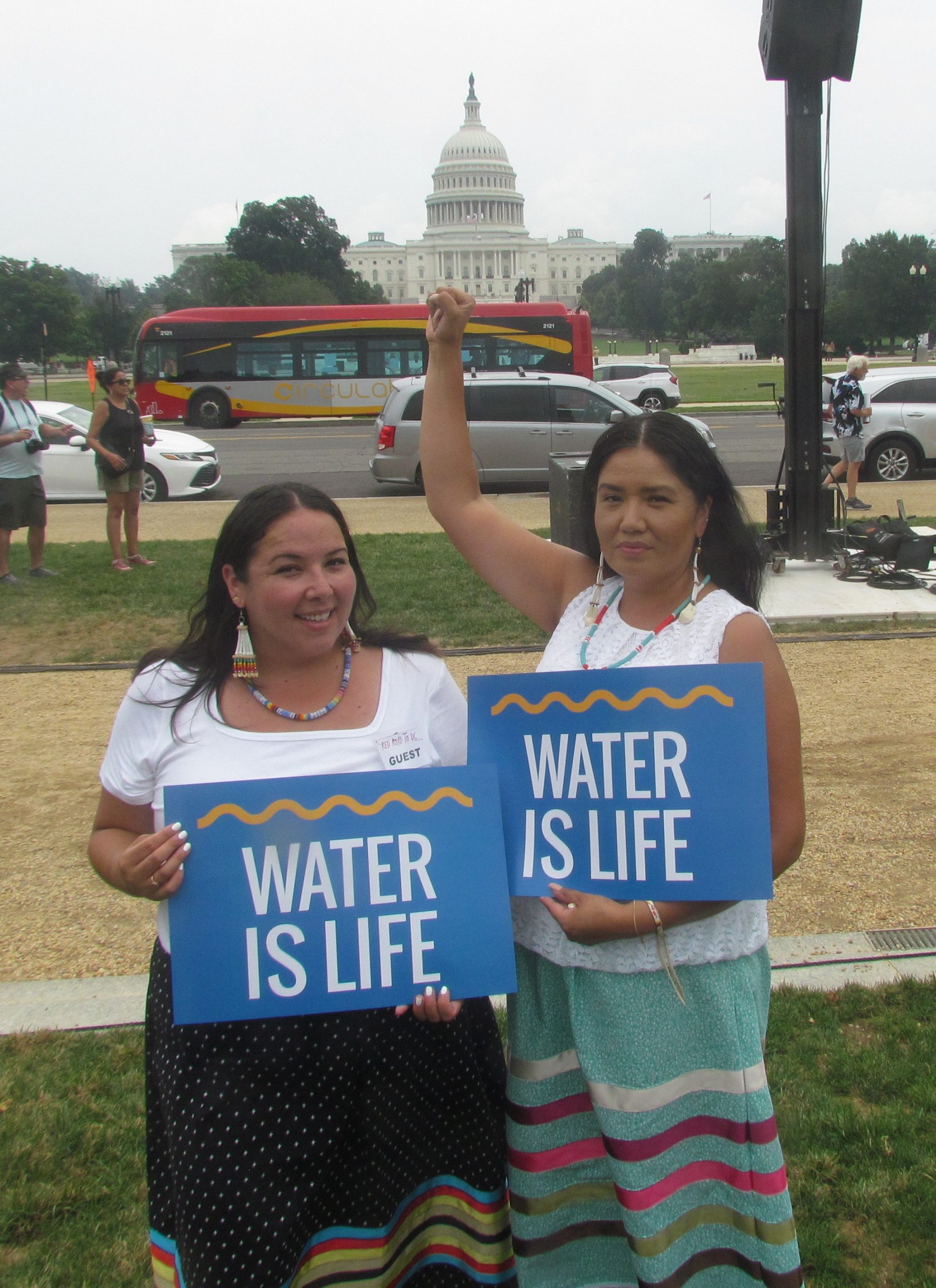 “Standing Rock captured headlines around the world, holding the attention of millions. It also invoked the horrifying memory of Wounded Knee, where, more than a century ago hundreds of Lakota people were massacred by the U.S. Cavalry for protecting their treaty lands from the encroachment of gold prospectors in the midst of the Black Hills gold rush. It was as if Standing Rock was leaping from the history books. This time, it felt like maybe if we did something, the outcome could be different.

“By 2025, two-thirds of the world’s population may face water shortages. Oil infrastructure can accelerate climate change, harming those who have contributed little to this situation. In this context, the Indigenous belief that water is sacred is also the most scientifically rational and environmentally responsible one.

Faith Spotted Eagle, a founding member of the Brave Heart Society, which celebrated its 25th anniversary in 2019, was among the featured speakers at the Red Road to DC blessing ceremony at the National Mall and concluded her remarks by singing “Mni Wiconi” in her Native Dakota language.

Running Strong was proud to support the efforts to stop the DAPL pipeline through out “Standing with Standing Rock” initiative in 2016 stating at the time: “As for us at Running Strong, we are not a political organization but a humanitarian one which has been providing support to Native Americans across Indian Country for 30 years, we stand with Billy and the Standing Rock tribe in their anxiety over what could happen in the event of a major spill – and pray that it doesn’t.”