Road to Tokyo: A Tumultuous Experience for the Price of a Dream

Yesterday, July 26, 1964, I qualified for the Olympic team in the marathon. Today, just settling into a 10-mile run with a comfortable pace, it’s time to start analyzing my body to determine if there are any flare-ups with my recently healed injuries. New injuries can be dormant under the soreness, created by the stress absorbed while running the marathon, only to surface a day or two later. Surprisingly, my stride is fluid; my pace is smooth.

I have never felt this way before. Looking at my shadow, its contour begins to change. Reflecting back to me an image of strength, confidence, and grit all cloaked in the form of a spiritual grace. I am astounded by the elegance the shadow presents. I quickly scan the sky for clouds and the trees to see if the clouds or the winds of nature are blowing the tree limbs, creating this magical moment.

There are no clouds and no wind; I smile, take a deep breath and thank god for a sacred experience. My mind wanders and tells me my father and mother are congratulating me from heaven for becoming an Olympian.

My feet are in cadence with my thoughts as my shadow floats forward. In my mind I hear the Olympic creed: “The important thing in life is not the triumph, but the fight. The essential thing is not to have won but to have fought well.”

Finishing my 10-mile run and approaching the track, Coach Thompson is waiting for me. I take one more look at my shadow. It reflects an exhausted marathoner in need of nourishment and rest. Coach congratulates me and we enjoy the moment. He shares how his Olympic experiences shaped his life.

In 1920 he won the Olympic gold medal in the 110-meter hurdles at Antwerp, Belgium. In 1922 he graduated from Dartmouth College. In 1927 he became the head track and field coach at the United States Naval Academy. For thirty-six years he mentored young athletes. Today he is my mentor, helping me pursue an Olympic dream. 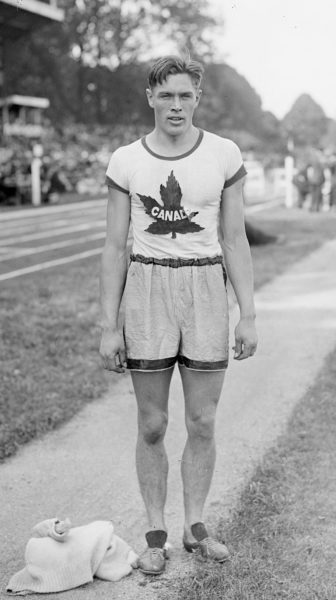 Coach, speaking very sincerely, said, “I shared my Olympic memories with you Billy, because today is about creating your Olympic memories. Hopefully my words can be of value.”

We continue by reviewing the training program I recently choreographed: making my transition to speed work, Coach Thompson agreeing with my plans. We part, and as usual, he has me inspired.

On August 12, 1964 I met the Olympic “time” standard to go to the Olympic games if I place among the top three finishers at the US Olympic trials on September 12.

Patricia joins me in the bedroom to help me pack for my trip to Pomona College in Claremont, California. Many of the US athletes are staying there during our final week of preparation for the Olympic trials. She knows my training has been going exceptionally well. Also, being very intuitive to my emotions and sensitivity she quietly asks, “What’s bothering you, Billy? Is it the trials or the two letters we received?”

Displaying defiance Patricia has never seen in me, I respond that it’s the letters I received when I finished second at the US Olympic marathon trials (that earned me my place on the US Olympic team).

Patricia picks up the letter that was on the floor in the corner where I threw it and begins to read.

“If you make the Olympic team in the 10,000 meters, you need to give up your spot in the marathon to the runner who finished behind you. If you try running both the 10,000

meters and the marathon, you will be a disgrace to our Olympic team and an embarrassment to America.”

I quoted the second letter, “You are a flash in the pan. Give up your place in the marathon to Jim Green who finished behind you. He is a seasoned marathoner.”

I stopped quoting the letter. My thoughts were, “Yes, Jim Green is a quality and seasoned marathoner. More importantly, not knowing him personally, my feelings are he is a man of honor and integrity.”

My words to Patricia are, “These letters were written by people who feel they have the privilege to speak to me in this manner”. Her smile and expression tells me she understands and agrees.

Today is September 12, 1964 and we have just arrived at the Los Angeles Memorial Coliseum. The final for the US Olympic 10,000-meter race starts in one hour.

While making my way to the warm-up area I hear “Billy, Billy, over here!” Turning toward the voice that is immediately recognizable — Coach Easton, my coach from the University of Kansas is fervently rushing toward me.

“Congratulations on making the Olympic team in the marathon and good luck today in the 10,000 meters!” he shouts.

Instantly my mind flashes back to the days he coached me. I had not been diagnosed hypoglycemic or border-line type 2 diabetic yet. I was told my race performances are because I am a minority, have low self-esteem, came from poverty and orphaned.

It’s painful recalling him telling me I was the worst cross-country captain he ever had, after I won the Big 8 Cross Country individual title, but as a team we finished second.

The next thought flashing across my mind was at the NCAA Track and Field Championships my senior year in college. I asked Coach if it was possible for me to have breakfast at 9:00AM instead of 6:00AM. He responded, “Let your conscious be your guide!” I thanked him and went to bed.

The next morning I arrived at the restaurant at 9:00AM feeling rested. Coach Easton was waiting. He gave me my airline ticket and said, “You’re off the team,” then turned and walked away.

The 3-mile that day at the NCAA National Track and Field Championships was to be my last collegiate race. I am crushed, fighting to get my breath. He kicked me off the team for requesting to have breakfast at 9:00AM instead of 6:00AM.

Yesterday Pat Clohessy and I had agreed on a strategy, running together behind the lead pack conserving energy. Then, with two laps to go, make our move to race the final two laps. Our working together excited me. Easton must have also found out about my strategy with Pat (a competitor) who is from Australia and attending the University of Houston. 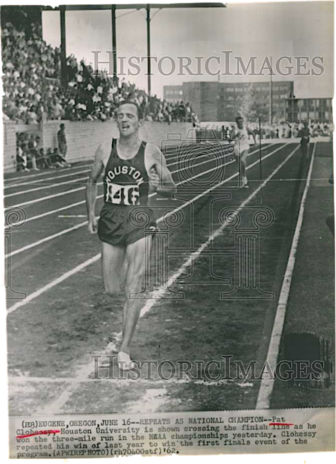 Pat Clohessy and I felt on a given day either of us could win. Working together made sense to me. I lost my appetite; my collegiate athletic career is over. I returned to my room.

It’s mid-afternoon, Coach calls me and says, “The three mile is in an hour and a half. I feel sorry for you. We wasted an airline ticket to bring you here, you may as well race.”

We are halfway through the three mile; Clohessy and I are following the lead pack as planned when Easton shouts, “Billy, get up to where you belong!” Clohessy comments, “How could you put up with that bloody bloke for four years?” Then in a daze I hear him shout again, “Get up in front or get off the track!”

Did I just hear him say get off the track? I walked off the track and Clohessy continued our strategy and went on to win the race. The last words Coach spoke to me as a college athlete: “We wasted an athletic scholarship on you.”

I knew from this point on to hear his voice would negatively affect my performances.

Now, here at the US Olympic trials, Easton is standing in front of me. Refocusing, I look Easton in the eyes. He repeats his words. “Good luck in the 10,000 today. You can do very well in both events at the Olympic Games, Billy.”

My heart and soul says, “Now is the time.” My response is, “Thank you Coach, but to do well in Tokyo your help is needed. Coach, I cannot perform in your presence.” He acknowledges my comment with his eyes and says, “I wish it was possible for me to have reached you.”

I respond, “It was both of us Coach, but today if I hear your voice during the race, I will drop out. Please cheer me on, but no voice.” He nods and says the Marine Corps has been good for me. We shake hands and part.

The runners are called to the starting line. We hear “On your marks!” And the starter’s pistol is fired. Gerry Lindgren takes the lead, followed by Doug Brown and Ron Larrieu. I tuck in behind them.

The pace for the first three miles in relatively slow. Comfortably tucked in third place, I wait for Easton’s voice. A few more laps, I continue to wait. Surprisingly, Doug Brown begins to falter. The first fourteen laps had a tense, hypnotic effect on me, waiting to hear Easton’s voice. Ten laps to go, Gerry makes a strong move. I pass Larrieu and go with Gerry.

It’s frightening knowing I may still drop out upon hearing Easton’s voice, even though Gerry and I are basically on the Olympic team in the 10,000 meters. It appears Larrieu will join us with Doug Brown falling farther and farther back.

We continue; Gerry accelerates. I cover it with my acceleration, Gerry covers mine. We continue challenging each other, neither of us relinquishing. I am still waiting for Easton’s voice. Three laps, then two laps.

Six hundred yards to go, Gerry throws in another move. I let Gerry go, no longer worrying if I hear the voice. The weight of the world is off my shoulders. 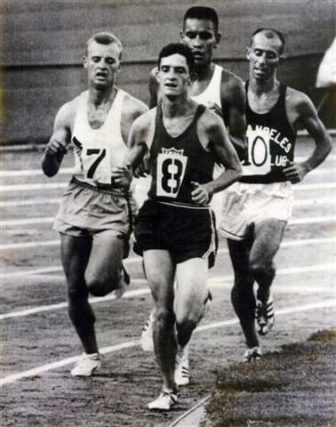 As Gerry crosses the finish line, the fans filling the coliseum give him a standing ovation. It is well-deserved, he has a chance to medal at the Olympic Games. I finish in second place, Ron Larrieu is third.

Gerry is starting to take a cool down. He gestures for me to join him. The fans continue their standing ovation. Gerry is too shy to acknowledge them. I hold his hand high above his head to convey to the thousands of track and field fans that I also applaud our young distance running phenom as his cool down becomes a victory lap.

As we circle the track, I privately celebrate my victory — the removal of some deep emotional and psychological scars.

I call Patricia to let her know I made the Olympic team in the 10,000 meters. She is thrilled for me and excited for both of us. In three weeks we will be in Tokyo, Japan, the site of the 1964 Olympic Games! A place where Olympic dreams come true. 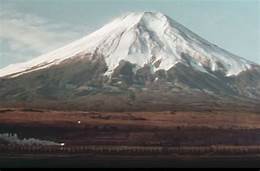 See you next month in Tokyo.