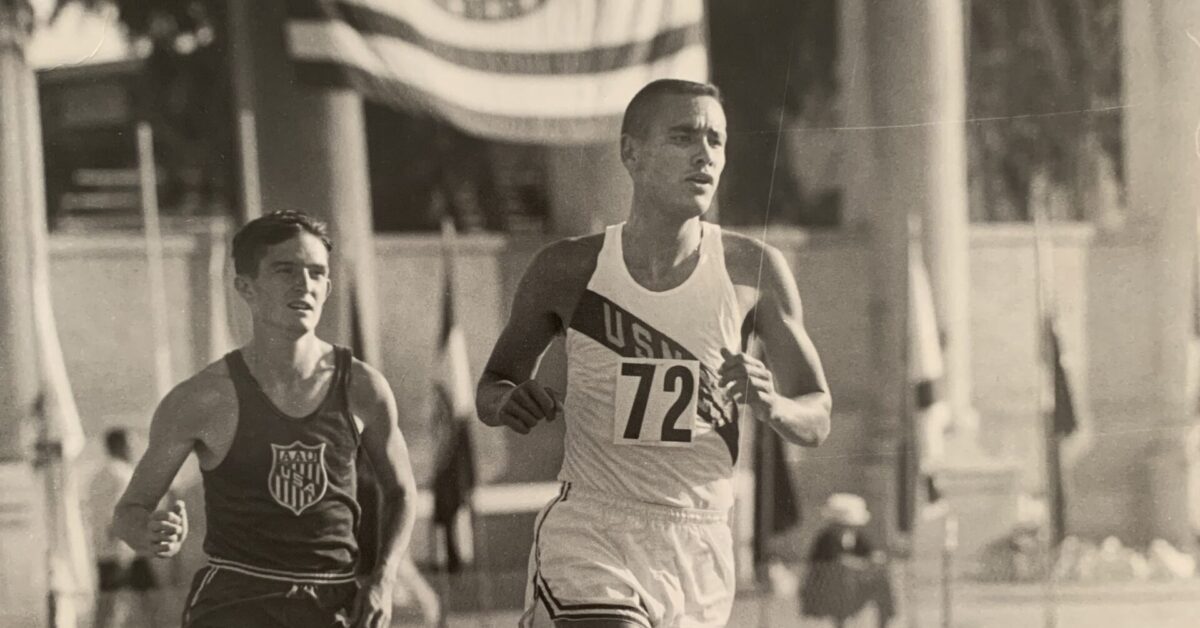 The day is Friday, June 25, 1965, and I am at the five mile mark of my fast paced, hilly ten mile run over Camp Pendleton’s engineering roads and trails. Approaching a very steep hill of about 50 yards, where I usually sprint to the top, my senses are alert!

Once again, I see it! The rattlesnake stretched out in the sun at the base of the hill. It always appears to be sunbathing. My caution says it is lying in wait.

Choosing to make a wide curve around my much-respected reptile friend enjoying his domain is a wise decision. The rattlesnake is huge, my guess: over four feet in length.

Quickly resuming my pace, the tranquility these roads and trails bring me knowing I am running on indigenous land, is soothing. Finishing my run and checking my watch, I am surprised. I must have been in the zone! Although my body felt sluggish before starting this workout, I just bettered my previous best time by 30 seconds on this challenging ten-mile course.

Tomorrow is June 26th and we are driving to San Diego, California for the United States Track and Field Championships. The six mile run is Sunday, the 27th.

But tonight, Patricia and I are relaxing at the officers’ club enjoying dinner as we review two major decisions being made. One by the USMC and one by the USA Track and Field officials.

We discuss the USMC concern first. I am right on the cusp of going to Vietnam. The new policy states if you have six months left in your tour of duty and your unit is being deployed, you will deploy with them for the remainder of your tour.

My unit is scheduled to ship out the second week of July. I would have 5 1/2 months left since I am scheduled to be discharged on December 15, 1965. However, I was told that I may still be returning to my Unit: Truck Co. H & S 1st FSR FMF Camp Pendleton, as a motor transport officer on July 1st.

The signs of our ever-increasing involvement in Vietnam are everywhere. Coach Tommy is no longer

coaching the rapidly diminishing elite Marine Corps Track and Field Team. Several teammates are being honorably discharged while others are back with their units waiting to be deployed. The Marine Corps will decide my status this weekend. Do I rejoin my unit for deployment, or, if I finish first or second on Sunday in the six mile race, do I join the USA National team competing against the USSR on July 31st and August 1st in Kiev, Ukrainian Soviet Socialist Republic?

My personal plans are simple, but not easy. I share them with Patricia. She listens intently to my comments. 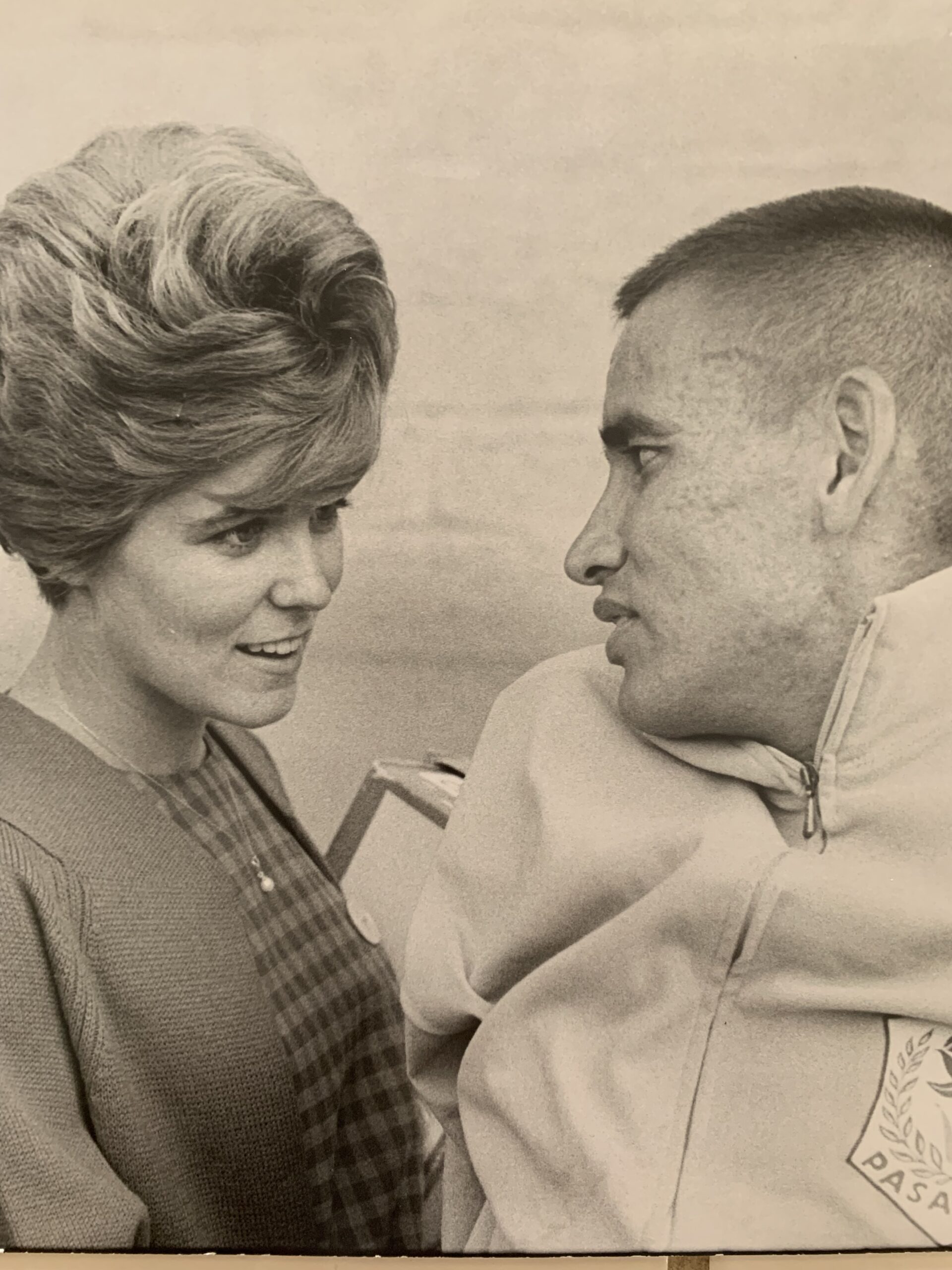 Patricia, still quietly listening, shows her support with a slight nod of her head.

The last bit of information I share with her is the letter I wrote to Col. Don Hull, Executive Director of the USA Amateur Athletic Union.

The letter stated I would like to go for two world records in one race at the National Championships, the six mile and the 10,000 meters.  I am requesting to have the track measured for 10,000 meters as well. Patricia appeared a little surprised, so I explained in case the Marine Corps has me deployed with my unit to Vietnam, at least my athletic goals may still be achieved.

As we leave the officers’ club for home, Patricia asks, “How did the AAU respond?” My answer was no reply yet, we will find out tomorrow.

The expression on her face and the raising of an eyebrow gives me her answer! They will not respond to my request.

It’s late, so Patricia sees our babysitter home as I start to record my day’s workout and review the last four weeks of training. Somehow my body, mind and soul feel free and refreshed. After writing down my goal, “Ready for a new world record in the six-mile run” with my eyes closed, my mind says it three times.

Patricia checks on Christy, she is sound asleep and gives her two kisses… one for herself and one for me. Then she turns off our lights.

I am at the track and talking to Col. Don Hull, asking him if there is going to be a finish for the 10,000 meters as well as the six mile. He responds, “There is not enough time to measure the track for a 10,000-meter finish.”

My last comment, humble and confident, is… I will give you two world records… six mile and 10,000 meters. He repeats, “It’s too late!” Col. Don Hull leaves. Another AAU official says this is America, Lieutenant. We run yards, not meters! I am livid!

The meet is way behind schedule. Starting my second warmup, low blood sugar symptoms are beginning to occur…

The six-mile runners are now gathered near the start as officials try to make up time. Our new starting time is in 20 minutes. My eyes scan the stadium for Patricia. She sees me looking and comes down to the track level. Patricia can tell I am going hypoglycemic and senses my panic as it consumes my confidence.

I am telling her I will wait until I get to Europe then go for the six mile and 10,000-meter world records. I will just try to make the team today. She looks at me with empathy and confidence as she says “You have been training for the six mile world record! Go for it, you may never get another chance!”

My response shows anger and a need for sympathy as I say: “What the hell do you know about it? I cannot do it today!”

Patricia calmly looks at me and says “Wait, I am going to buy you a candy bar!” She disappears. Within minutes she is handing me a candy bar with the instructions: “EAT!  Now go for the world record!” In three bites the candy bar is being digested.

We are called to the starting line. The command is given, the starter’s pistol fires, and I go to the front.

The first four miles, Gerry Lindgren and I break the field. We continue at a very fast pace, well under Ron Larreau’s American record pace but just a fraction slower than my Olympic 10,000 meter pace. 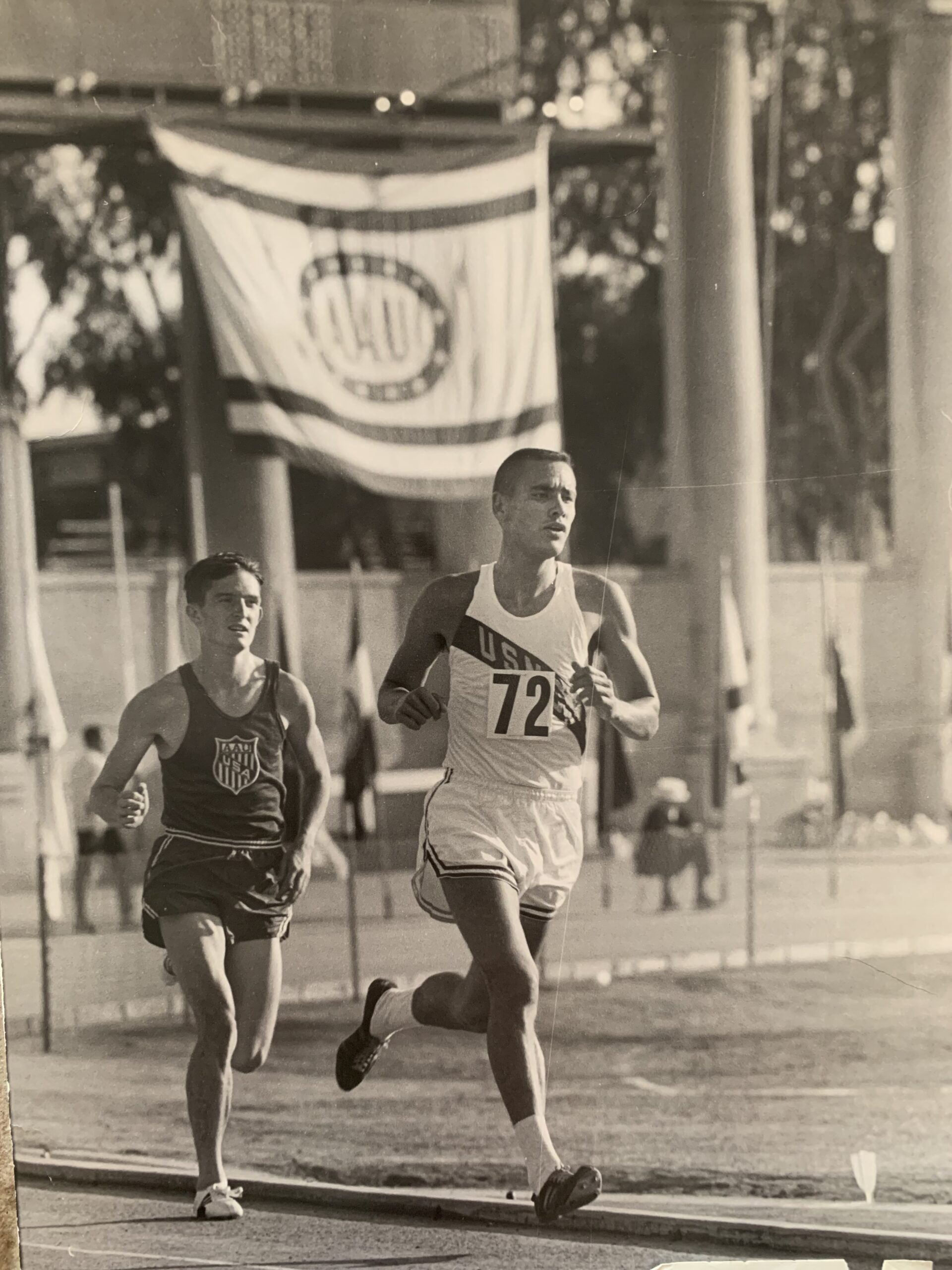 My feet are developing blisters but I do not feel low blood sugar. Gerry chooses to run behind me just off my right shoulder. It appears I will have to continue setting the pace. Gerry is choosing to surprise me by coming from behind like I did to Clarke at the Olympic Games in Tokyo.

This track is very hard on a distance runner’s legs.  My legs are tight, and blisters are forming on both feet but are not hurting much. The big plus is the candy bar is still working. No low blood sugar symptoms. Yet!

Do I continue to lead or slow because of the blisters and make it a different strategic race? My decision is staying with Patricia’s advice. I pick up the pace.

At the five-mile mark we are flirting with the world record. With 2 laps to go, Gerry and I are running a near dead heat as he remains on my shoulder. The crowd is hysterical. I think the race is mine, but I also know Gerry thinks his strategy will work.

With 300 yards left, Gerry makes his move! He pulled alongside of me, but I didn’t let him pass and also saved a little should he make another try. We are both depleting our reserves, we are both under the world record pace.

One hundred and ten yards to go, Gerry is about a foot behind me. My plan is to accelerate as we come off the final curve. Gerry accelerates a fraction of a second before me and is at my side. My drive begins and I hold him off. He cannot gain any more on me and I cannot pull away. He remains less than a hands-length behind me as we sprint toward the tape. 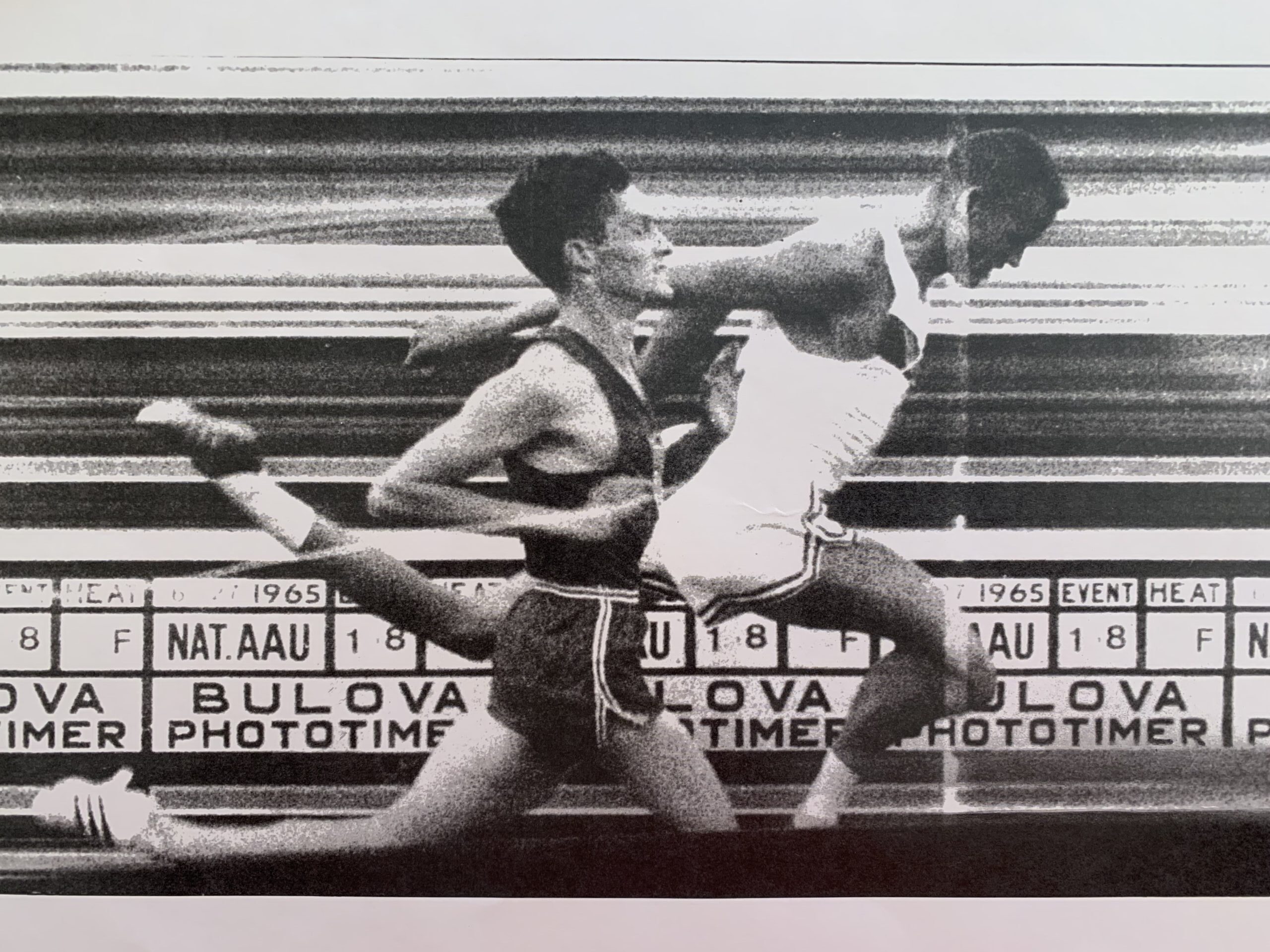 Announcing the winner is delayed as the officials look for the new rule book that applies to the new automatic timer that is being used at a US National Championship for the very first time.

The new automatic timer can capture photo finishes and separate times down to less than five-hundredths of a second. Eventually, the new rule book could not be found. The officials used the old rule book that applied to timed races using the handheld stopwatches.

The old rule book states if a race six miles or longer is within five hundredths of a second or less between 1st and 2nd place, you move the faster time up to equal the slower time to compensate for human error. It appears the officials know the new rule but will not act without the new rule book in hand.

I am disappointed and disagree with them, but comfortable with their decision for two reasons.

First, the next time Gerry and I run a six mile race, we will destroy the world record just set. The second reason; all Gerry had to do was lean and we may have both had the same time of 27:11:55. 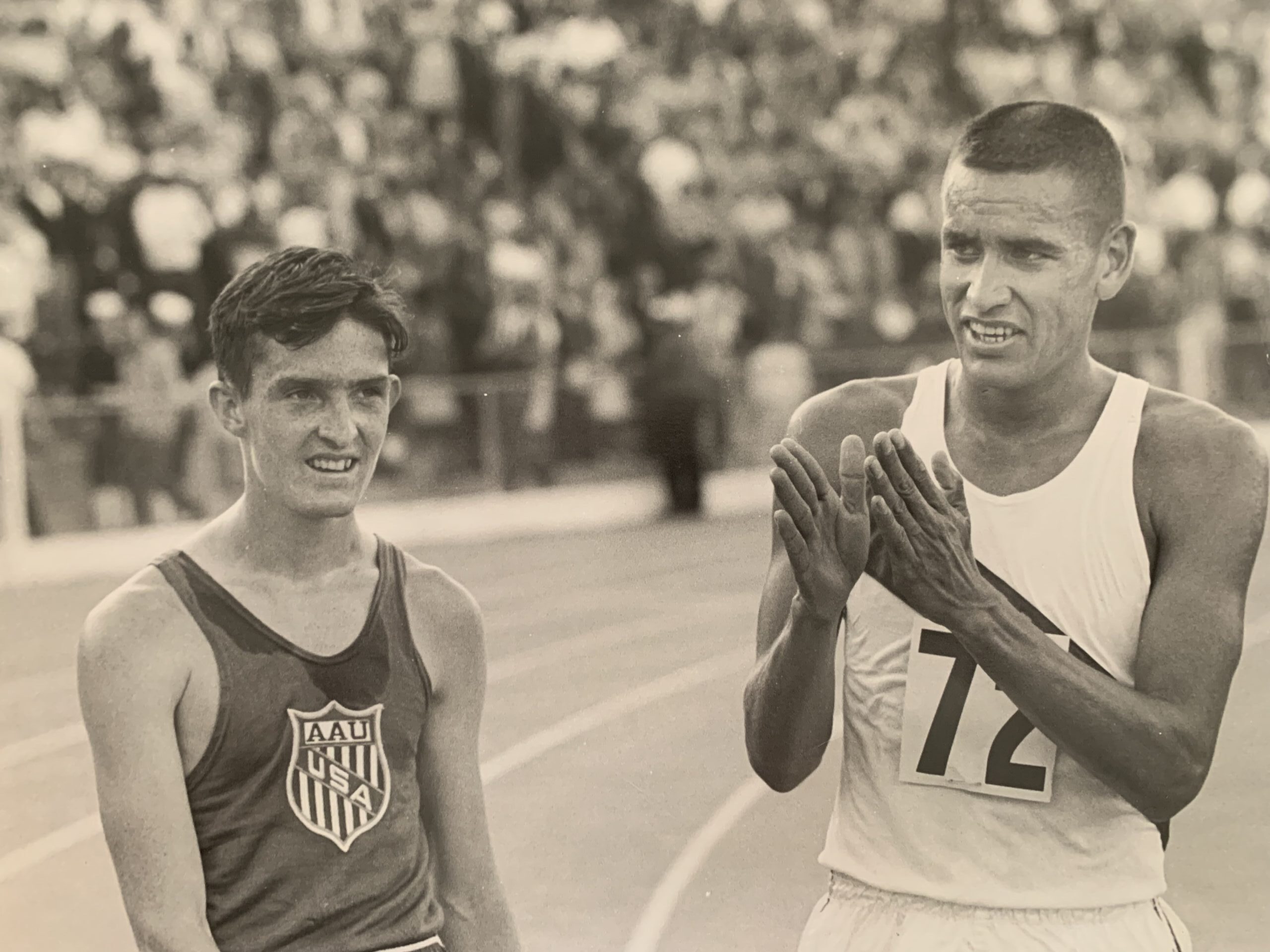 The race was described as follows:

“Never has there been a foot race quite like this one. Never in a major race have two men run so close together for the entire distance. Never has there been a world record longer than two miles by Americans. And never have two runners in such a head-to-head race been so popular that the spectators found the thought of a loser almost unbearable. Billy Mills and Gerry Lindgren set a new world record in the greatest six mile ever seen.” — Track and Field News. July 1965, vol. 18, No. 8

“Billy Mills pulled me over just before the start of the six mile and told me he would like to give me a present of a world record.  He said he would make it two records if I could have the course set up for the 10,000  meters as well.  But it was too late to have the 10,000 meters measured and marked.” — Don Hull, Executive Director of the AAU in Track and Field News. July 1965, vol. 18. No. 8. Page 22.

As I lay on the training table, the trainer takes my shoes off. My socks on both feet are all bloody. The feet are blistered with my bloody socks stuck to the soles of my feet.

Patricia joins me and we hug. She whispers “Can’t you just run a more normal race? Less drama and emotion? I am exhausted! Do you have any of the candy bar left? I need a sugar lift!”

We hug again with laughter. An AAU official comes up and says the Marine Corps has informed us that you can join the National Team to compete against the USSR in Kiev on Saturday, July 31, 1965. We are excited! It’s the race my mind, body and soul has been training for this entire season. I tell Patricia my goal is still a sub 27:40 10,000 meters.

Patricia, responding with a smile and a roll of her eyes, said: “Let’s go home!” The official said yes, in 48 hours you run a 5,000 meter in Helsinki, Finland. The trainer says be cautious, Lt. Mills. It’s going to be a while before those blisters heal.

Patricia and I will see you next month in Russia, Ukraine, Poland and West Germany on our Road to Tokyo Series.