Road to Tokyo: Qualifying for the Olympic Marathon Team

July 25, 1964. As we drive to Culver City, California, I explain to Patricia the process to make the USA Olympic Marathon Team. There are two marathon trials: The first was the USA Amateur Athletic Union Championship in Yonkers, New York on May 24, 1964. Only the winner is placed on the Olympic team. The Western Hemisphere Marathon in Culver City, California July 26, 1964 is the second Olympic trials. The first and second place finishers will round out the other two places on the Olympic team.

Buddy Edelen, America’s best marathoner, won Yonkers and was our first marathoner to make the 1964 Olympic team. If he can stay healthy, he has an excellent chance to medal. 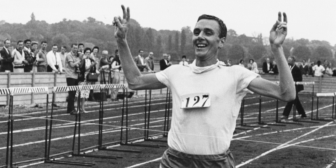 The Yonkers marathon turned out to be very challenging. It was 93 degrees Fahrenheit with minimum water stations, creating a disaster for the runners.

The weather forecast is predicting an equally hot day tomorrow. Patricia suggested we have two pails of water –– one with paper cups for drinking, the other with a sponge to cool off. She would drive to several spots along the course and give me water or a wet sponge. We asked our friend Tye Ryal if he would be Patricia’s driver. He was thrilled. Our strategy was set.

It’s 3:45pm, July 25 and we are in our hotel room not far from the Veteran’s Memorial Building –– the start and finish of the race. Patricia has been studying the marathon course.

She says, “Billy, the six mile area has many places where Tye can pull over so I can jump out and give you water and a cool wet sponge.”

My response was, “Great. See if it’s possible around the twelve, eighteen, and twenty-four mile markers as well.”

Dinner time, we find a very quaint restaurant. The quietness mixed with a relaxing atmosphere is perfect. Patricia orders a steak with a baked potato. I do the same, but add a side of vegetables.

She smiles with excitement, saying, “I feel like a marathoner being responsible for the water stops!”

I say with a smile, “Remember, you’re only doing water stops for me –– no one else!” We both laugh. Then, with a look of disbelief, she says, “Billy, you’re serious!”

Dinner was excellent. We are back at our hotel room, casually talking about a variety of subjects. Patricia turns our conversation to the marathon, saying, “Billy, you were very serious at dinner when you commented ‘The water is only for me.’ Are you worried about the race?”

My response is a firm “Yes” followed by a gentle but confident “No.”

I continue, “Let me answer the yes first. Last week I accidentally ran into one of America’s top marathoners. I won’t mention his name because you may meet him tomorrow and I will not pre-judge him for you. He has a chance of making the Olympic team and your impression of him should be your own. More importantly, I think he is a quality and intelligent person, so I was totally confused by his response when I told him my name and said that this weekend is my first marathon and asked if he had any advice for a first-timer. In a very serious tone, he replied, ‘You damn sprinter, moving up to man’s race. Stick by me and I will tell you where to quit!’ I was speechless. We parted. At first, I thought it was racial, but then my subconscious mind was saying he is trying to foster confidence. He sees you as a threat! So, Patricia, tomorrow I will be everyone’s threat. The water will be my water!”

“Now my response to your second question.” [Are you worried about the race?] My words begin to flow and Patricia’s expression reflects my confidence.

“I have never been more prepared mentally, physically and spiritually for a race since being diagnosed hypoglycemic and pre-diabetic ten months ago, as I am for the marathon tomorrow.”

“I am no longer afraid of going low blood sugar, as I remain well aware of how dangerous it can be. My strategy is to race as positively as I can. If I go low, (it will happen on occasion) I will focus on running as efficiently as I can to allow me to run as fast and as long as I can. I will accept hypoglycemia instead of fearing it. Accepting it, not fearing it, will give me comfort and confidence in my staying the course.”

“When told as a child it’s my journey, not my destination that will empower me, I am finally beginning to understand the power of those words. It was not just being orphaned or being treated racially, etc. That gave me a broken soul. It was also how I responded to those devastating challenges that became an issue. You see, Patricia, I am beginning to control my emotions and maintain the virtues and values of my Lakota culture, rather than letting my emotions control me and losing the virtues and values our society desperately calls for.”

“I remember reading in my psychology class at the University of Kansas that our subconscious mind cannot tell the difference between reality or imagination. It will have our body respond equally to both. My subconscious mind will always play a major role in the pursuit of my goals. Currently number one: our Olympic dream.”

“Back to our Olympic dream, Patricia –– do you realize we are going to surprise a lot of people in Tokyo?”

It is Sunday morning, July 26, 1964. The runners have been called to the starting line for the final USA Olympic marathon trials. Patricia and Tye Ryal are about fifteen yards ahead of me and look very nervous. I give a little smile.

The starter says, “Set!” and raises his pistol. I lean forward, lose my balance, and take two steps. I jump the gun!

The starter rolls his eyes. A marathoner mumbles, “We are running twenty-six miles, 385 yards today. Relax!”

Tye Ryal, who is an exceptional basketball player, smiles and gives me a thumbs up. Patricia is trying to contain a laugh and doesn’t make eye contact. Again, the starter says, “Set!” and raises the pistol. We wait, he fires. The race is underway!

Instantly there is more excitement five strides into the race. I am in front of Patricia; we make eye contact. Her eyes tell me she believes in me and her body and voice confirms it. She slaps me on my right hip as I run by and shouts, “Go Billy!”

Someone else is shouting, “Lady! Lady!” Glancing back I see an official scolding Patricia and saying, “He could be disqualified!”

I go with the lead pack of seven or eight runners. The first five miles we wind our way along Jefferson Boulevard. I’ve lost track but I must be fifth or sixth. We follow Culver Boulevard toward the ocean. Patricia is waiting almost 300 yards ahead of me. Remaining focused, I take the water.

We are now running the three mile stretch along the beach on Vista Del Mar. The view is energizing and beautiful. I am feeling strong and see the halfway point.

There is Patricia. Staying focused, I take water and a wet sponge. Then behind I hear, “Patricia, water and sponge!” I turn and see Patricia with all the kindness in her heart starting to give water and a sponge. With the feeling of past rejections, I stay true to my words. I shout back to her, “Don’t you dare share my water!”

More out of shock than agreement, she drops a sponge, then stares, showing her disappointment in me as the runner picks up the wet, dirty sponge.

I feel embarrassed and more ashamed. My thoughts are of my father telling me to “Choose the words you speak. Once you say them you can never take them back.” I will tell Patricia at the next water stop to stay there and give out water until it’s gone.

Another runner fades back to me. He looks like the marathoner who told me to stay by him and he will tell me where to quit. But I’m not sure.

We have less than two miles to go. My position is third place. But how far behind second place? I see Patricia and Tye but she doesn’t have any water. She’s very excited. “Billy, you’re in third place and less than twenty seconds from second place! The second place runner is hurting.”

I pick up my pace and I can see him. Yes, he is struggling. My pace must be a five-minute mile pace and my feelings are no one will match my pace in the last mile. Maybe I can catch Peter McArdle and win. I see a man watering his yard. Patricia is talking to him.

As I approach him, he shouts, “She wants me to spray you!”

My response is, “Yes, please!”

The spray is so refreshing. I see Peter. I am closing but I am out of distance. Peter wins. I join Buddy Edelen and Peter McArdle as Olympians. 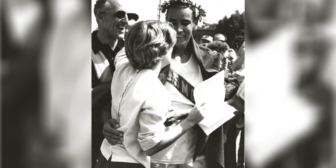 We are at the awards ceremony. The queen of the western hemisphere marathon places the traditional olive wreath on my head and starts to give me the congratulations kiss on the cheek. Just then I see Patricia and feel her hand gently come between my cheek and the kiss, as she announces, “I will give him the kiss!” As we hug, I see the names of the Olympians displayed on large white pre-printed name plates. My name, Lt. Billy Mills, is written in pencil on the flap of a brown cardboard box. Patricia and I smile.

See you next month!