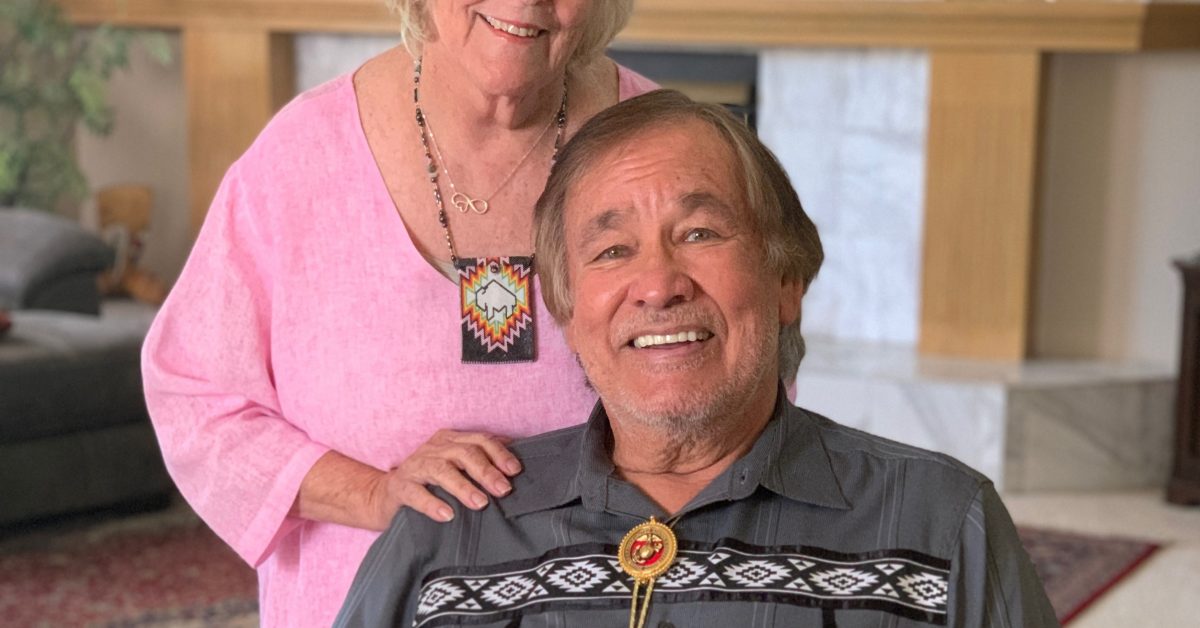 Patricia and I talked late into the night. Our main topic was to avoid becoming a casualty to what we called ‘post-athletic adjustment’. However, we both knew it was not going to happen to us. Why? Because we have too many fantastic opportunities awaiting us.

To name a few, Patricia’s career as an artist, me fulfilling my Lakota Give Away or extending my active duty time in the USMC for one more year. Talking late, I don’t know who fell asleep first. But we both awoke about the same time, early.

While enjoying a relaxing breakfast, we half seriously and half jokingly use the quote: “Today is the first day of the rest of our lives.” Author unknown, but some credit Charles Dederich, 1915-1997.

Mid-morning we leave on our tour of the German concentration camp, Dachau. The tour was life changing. Everyone wore extremely solemn expressions on their faces. It was frightening how such evil could be committed and then its inhumanity intensified beyond one’s imagination. Patricia, at a loss for words, whispered “Why did we come to view such evil bestowed upon the innocent?”

As we exited, my words were “Hitler derived some of his policies toward the treatment of the Jewish people from policies the United States enforced on the indigenous tribal nations”.

After six weeks in Europe, I am missing little Christy so much. Patricia assures me she hasn’t forgotten her Daddy!

As we were waiting for our team to board the plane in Augsburg, Germany for our return flight to Los Angeles, California, Patricia softly said “I had to wait until your competitions were over before telling you, but I shouldn’t wait any longer. Shortly after you left on June 28th for Finland you started receiving phone calls, physically threatening and hate-based calls. The Marine Corps is aware of them and hopeful they will not start up again.” We discussed what we should do, stressing Patricia and Christy’s safety is priority.

We started taxiing for our departure, when the Captain’s voice came over the intercom. Our departure is delayed.

Violent confrontations between Los Angeles police and residents of Watts, CA, and other predominantly African-American neighborhoods are occurring. The concern for us is shots may be fired at incoming or departing airplanes. Our departure time is now unknown. 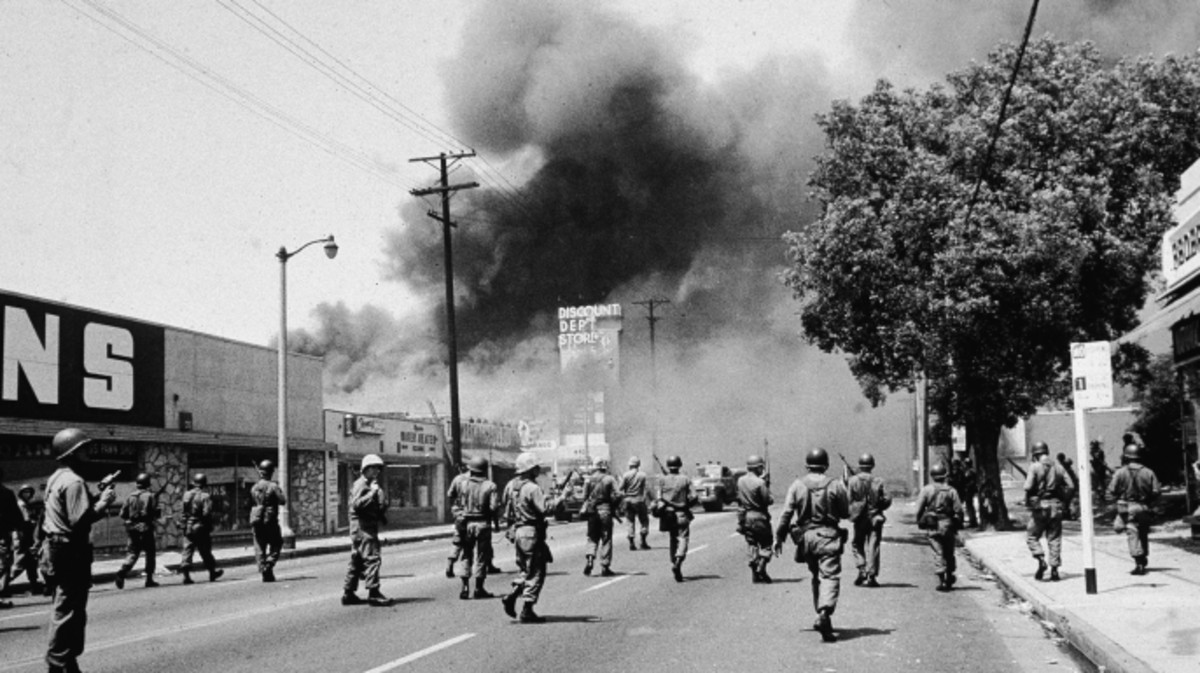 Two and a half hours later we are in flight, bound for Los Angeles. The solemn expressions we saw on faces at Dachau were now accompanying us home to social and racial injustice.

The civil unrest occurred for six days, resulting in 34 deaths, over 40 million dollars in property damage, 1,032 injuries and 3,438 arrests. Will we ever find our way to “One Nation under God, indivisible, with liberty and justice for all?”

I will still pursue “we are all related” and “global unity, through the dignity, character and beauty of global diversity”, even if on an individual basis.

We have been home for six weeks and the physical threats and hate-expressed phone calls continue. Most have been made off base from public telephones, but a few have now been made from the back gate at Camp Pendleton. The caller has indirectly expressed anger that the USMC sent me to Europe to compete against the USSR, not to Vietnam with my unit for a full 13 month tour of duty.

At the time, the USMC was sending its troops who had 6 months or more time of service to Vietnam if their unit was deployed there. They would serve out their remaining time with their unit. I had five and one-half months left when my unit was deployed so the Marine Corps sent me to Europe instead of Vietnam to compete against the USSR in Kiev, Ukraine, Soviet Socialist Republic. Both the USA and USSR were competing against one another for positive media coverage as well. I felt immense guilt after friends were killed and embarrassment after illness kept me from competing against the USSR.

I am sitting outside of Major General Hochmuth’s office. Earlier I asked his aide for advice and a request to be sent to Vietnam after being re-trained in my M.O.S. (Military Occupational Specialty).

This of course would call for extending my tour of duty for one more year.

My heart started pounding when his aide told me the General would like to take a few minutes with me. I had been in his presence before, but not on a personal level. Trying to relax, it was comforting, sensing a gentleness under his great strength and conviction to duty.

His words: “Lt. Mills, do you plan on making the Marine Corps a career?”

“General Hochmuth, Sir, that decision would be made after being brought up to speed in my M.O.S. and spending a full tour of duty in Vietnam, Sir!”, I replied.

“Lt., you are married and have a child, a daughter, correct?”

“Can I convince you to make the Corps a career?”

“Not today, but maybe after my tour of duty in Vietnam, Sir!”

With a slight smile detected on the General, he responds: “Lieutenant, you have already fulfilled your Marine Corps duty. You honored the Corps and you honored yourself under peacetime conditions. This is a cold war. Don’t ever let anyone make you a cold war son of a bitch. You served the Corps well, Marine!” I thanked the General and exited his office!

December 15, 1965, I was promoted to Captain in the United States Marine Corps and honorably discharged on December 21, 1965. 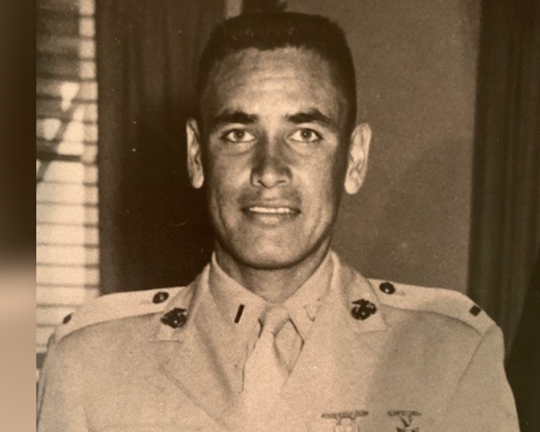 On May 14, 1967 Major General Bruno Arthur Hochmuth, USMC, was killed in South Vietnam.

We are driving to the City by the Bay, one of the many names given to the enchanting city of San Francisco, on this sunny cool March afternoon in 1985.

Patricia starts the conversation. “Billy, twenty-three years ago we were newlyweds.” Then she laughs. I get prepared to respond cautiously, slowly, “Yesssss?” with a question mark.

So, she continues. “Remember when I said you can make all the major decisions and I will make all the minor decisions?” Her eyes are sparkling, waiting for my response. “Wait a minute, Patricia. I haven’t been able to make any decisions at all during the past 23 years of marriage, you realize that?” As usual, we are both laughing as Patricia tries to blurt out: “So far there hasn’t been any major decisions!”

This type of humor has always been our way to be more open with each other as we discuss the good, the bad, the challenges, the achievements, the dreams, the cautions, as they relate to our future together.

“Yes, and how angry you were, Patricia, when…” She interrupts. “I was beyond angry, Billy. Being refused a credit card because I am female.”

“And how you solved the issue was very impressive,” I replied.

“You mean, when I changed my speaker bureau to Billy Mills Speaker Bureau, but kept the ownership?”

“Yes, and also how you reapplied for a credit card under P. A. Mills.”

We are both laughing now as we give each other a high-five.

“Giving a percentage of every dollar generated from your speaker bureau to fund my giveaway was a great idea.” I said.

“It was, Billy, until we booked you to speak at a conference in Nebraska. They had a very ethnically diverse group of speakers. They were excited to book an Olympic gold medalist. They asked for your fee, I quoted the fee and was told they will formally confirm the next day. The fee is well within our budget.”

“I remember. I will never forget your expression!”

“It was a statement I never expected to hear,” she continued. “ ’We did not know Billy Mills is an Indian. We have never had to pay an Indian speaker fee before. There is no budget for it, but we would love to have him!’ ” I laugh, but it is a laugh of protecting old wounds.

We are approaching the Bay Bridge. Patricia grabs my hand and we hold hands crossing the bridge.

Patricia started again. “Billy, do you remember when we had a meeting with the business leaders wanting to use your name on a grand entertainment theme park?”

Patricia continued, “That’s what hurt me the most! Why? They indirectly mentioned the image of alcohol and Indians as synonymous. Then we watched them drink themselves into a state of oblivion, as they lost track of their agenda and started asking you for autographs for their children.”

“Watching you signal me several times to get us out of there… It took me a few more autographs before we could respectfully and safely make our exit!”

We arrived at our hotel and our meeting place. “Billy, we have always researched the companies we are considering doing business with, and yet have also received some shocking surprises,” Patricia said.

We are entering the meeting area and Patricia asks, “What are we looking for, Billy?”

Choosing my words carefully, I begin, “I have always felt that the businesses with a vision and mission statement, which are value-based and everyone commits to live those values legally, ethically and morally, all while protecting their bottom line, develops a strong social consciousness of the communities in need and reach out to empower them, will become the brand names of the 21st century.”

Patricia says, “Like the Lakota virtues and values, Billy?”

“Absolutely! The giveaway is giving to those who have helped you in some way, empowering your dreams for example.  It is centered around responsibility, accountability, compassion, equality, respect and love. Today, you can use your giveaway to empower others in need locally, nationally or globally. Its core virtues and values are based on ethics, morality and faith, legally implemented. Patricia, it is the key missing ingredient to the maturing of our great democratic experiment and achieving one nation under God with liberty and justice for all!  It can actually address the one weakness in our free enterprise system which is also the Achilles heel to our democracy, PROFIT AT ALL COSTS!”

We enter the meeting room and meet Gene Krizek, founder of Christian Relief Services for the very first time. We saw a man of vision with virtues, values, ethics and morality! 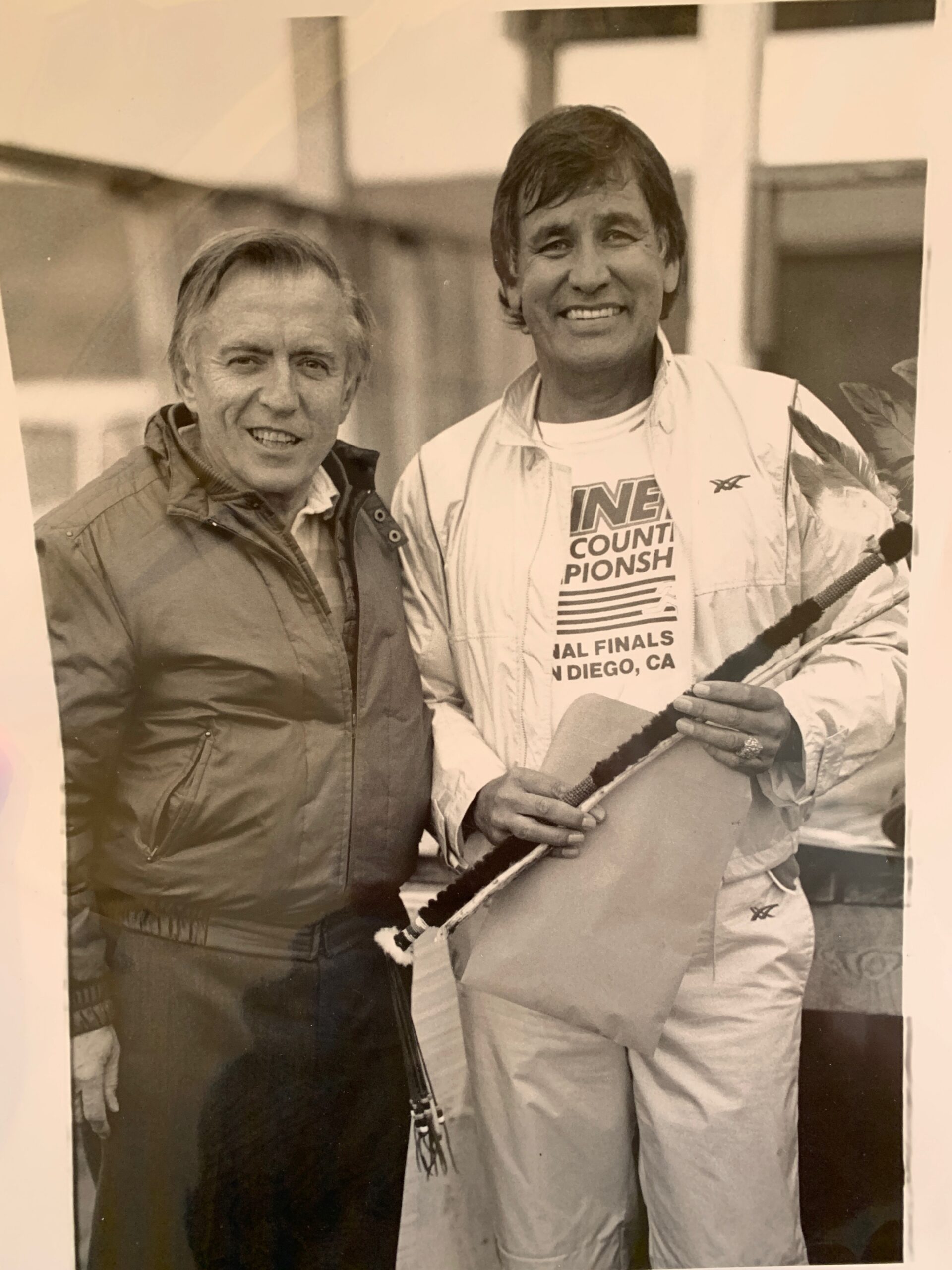 Running Strong has since been repeatedly recognized as one of the best charities in America; built stronger Native communities emotionally, physically, and economically; reached families in all corners of the country, regardless of tribe or state; and continues its mission of raising happier, healthier American Indian youth stronger than ever.

In 2013, President Barack Obama presented me with the Presidential Citizens Medal on behalf of Gene Krizek, our Running Strong staff, our incredible donors and most importantly, the communities we have the opportunities to serve.

To this day, we empower the vision of the elders and inspire the dreams of our youth. Thank you for joining us on our Road to Tokyo. 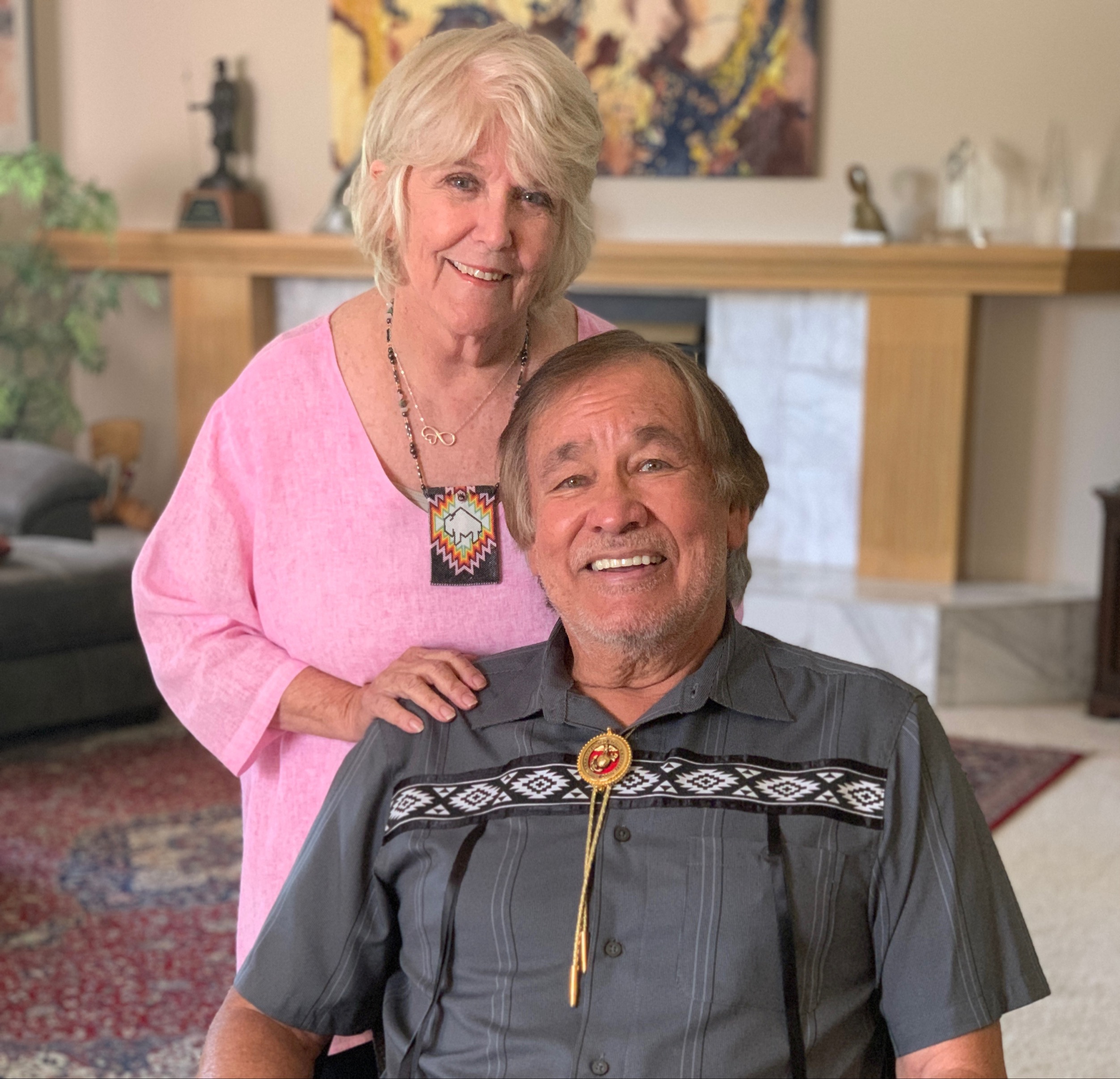