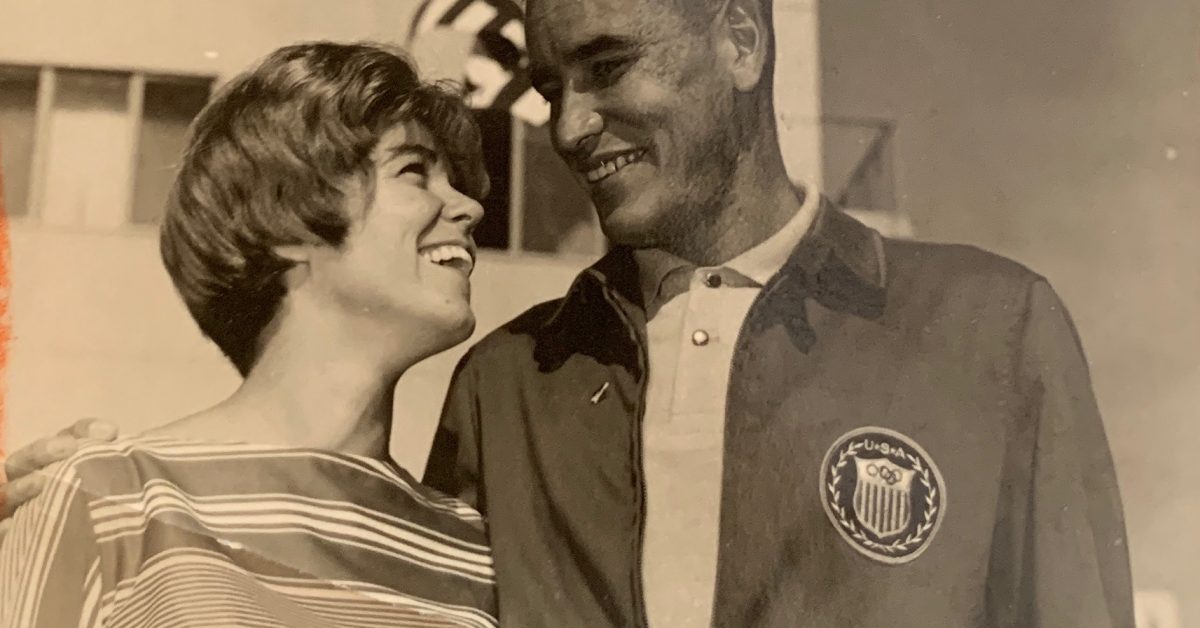 Road to Tokyo: The Olympic Games come to an end

Today is October 18, 1964. Patricia and I are returning from a command performance with one of my heroes — Lieutenant General Victor Krulak “Brute” — the commanding general of the largest field command in the US Marine Corps.

The last four days have been exhilarating, exhausting and a whirlwind of interviews, appearances, and more, all unyielding to my attempts of wanting to focus on getting ready for the Olympic marathon.

My marathon preparation is in direct conflict with my Olympic 10k victory. My feelings are simple: Just let me focus on the marathon, and I have a chance to medal.

Trying to focus on the marathon, I find myself in a constant state of bewilderment with my frustrations, followed by low blood sugar episodes. Finally, I decide just relaxing and accepting an agenda I have no control over is my best decision.

It proved to be an incredible learning experience of humility and compassion.

One such experience was when a gentleman said, “I congratulate you on winning the Olympic 10,000 meters. But I am most proud of you and honored by you being a US Marine. It was the Marines that saved my family during World War II. I salute you.”

His words humbled me and placed my Olympic gold medal and the upcoming Olympic marathon in their respected places.

I also experienced Japan’s omotenashi (hospitality). I met some local people and saw others who were so courteous, helpful and polite. Their compassion was like a sacredness. They reminded me of Lakota elders who contained and controlled their pain, still showing respect to others.

When astronaut Col. John Glenn challenged me to a race saying, “If I can’t beat you riding my motorcycle, I reserve the right to use my spaceship.” It brought laughter and comfort; but the need to prepare for the marathon still lingered.

The wait is over. It is October 21, 1964: The day of the Olympic marathon. Patricia will have the best view in Tokyo to watch the marathon. She will be in an all-access US Marine jeep with her personal driver. He will follow the lead pack and also make stops at certain points along the way.

My plan is to start conservatively and be in the top ten at the halfway point, also called the turn-around point on the out and back course.  Here, I will start to pick up the pace and hope to be in the top five at the 21 mile mark. The race starts there!

We are called to the starting line. 83,000 spectators are silent in anticipation. The command is given. The starter’s pistol fires. The Olympic marathon is underway.

Abebe Bikila, the agile Ethiopian, is the favorite. In 1960, running bare footed on the roads and cobblestone streets of Rome, he won the gold medal. He is expected to win today even though he had an emergency appendectomy six weeks ago.

Running according to plan, I am approaching the halfway point. Bikila makes the turn and begins to open a lead on Ron Clarke and Jim Hogan of Ireland. Doing a quick count, I am in ninth place. Right where I want to be.

Running comfortably, I choose to forgo my nourishment drink (Tang) at the water station. My confidence is building. To save a few seconds, I pass the second water station. Approaching 34 kilometers, or just a bit over 21 miles, I believe I am in sixth place. Approaching another water station, I see Jim Hogan of Ireland- he is struggling. The heat is too much for him. My body tells me I should take my drink.

I can’t find my drink and debate just taking any drink on the table, but I do not. The thought “Did I make a mistake not drinking at each station?” crosses my mind. Still feeling strong and confident, I erase any negative thoughts from my mind.

Shortly past the 37 kilometer mark, about 23 miles, I see a small group of Marines. They are shouting, “Four! Four! Four!” Does that mean I am in fourth place or are there four ahead of me? It could be I have four kilometers to go —  two and a half miles. 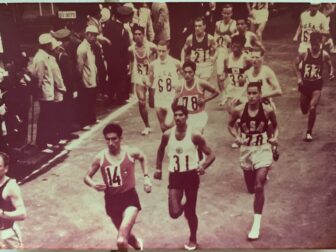 With my confidence soaring, I increase my pace, but something is wrong. The world around me is closing in. The colors are all turning gray.   My……………………..

Suddenly I am aware, realizing I am running, my first confused thought is “Where am I?” Oh my god, I am running- it’s the Olympic marathon! I must be in last place. I have to finish!

A group of runners go by me, it feels like 1,000 runners passing me. Crossing the finish line I am vaguely aware of people in the stadium cheering for me, but I am disappointed. I failed myself. Someone congratulates me on a fine effort and tells me I finished 14th. I ask for something sweet to drink. A Coca-Cola is placed in my hand. I ask for more and an Ovaltine drink is placed in my other hand.

While enjoying a few Coca-Colas and Ovaltine drinks and cursing myself for letting an Olympic medal slip away, I learn Abebe Bikila won by a large margin. Great Britain’s Basil Heatley finished second with a strong sprint, passing Japan’s Kokichi Tsuburaya in the final 100 yards. Tsuburaya’s bronze medal is Japan’s only medal in track and field.

Bikila walks by me. We make eye contact, starting to congratulate him, he speaks first through an interpreter who says, “Billy, Abebe congratulates you on a magnificent Olympic 10,000 meter victory.” We smile at each other. I felt we understood each other’s journey.

As Abebe leaves, my mind goes back to the Marines on the course shouting “Four! Four! Four!” They must have been telling me I had four more kilometers to go. Laughing, I forgive myself for feeling like I failed. As the jeep Patricia is riding in approaches, I am told Edelen placed sixth and McArdle twenty-third. 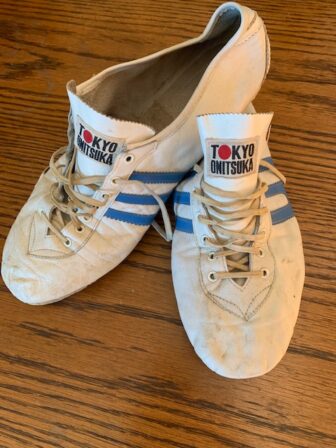 Patricia gives me a hug and congratulates me on a strong performance. Hand in hand, we hurry to the parking lot to take the assigned vehicle back to the village. Our vehicle is gone; another driver says the US runners were in a hurry and for me to find my own way back.

We started walking and after about half an hour a car stopped and offered us a ride. It was Bob Richards, Olympic gold medal winner in the pole vault, now working for Wheaties. He was doing radio commentary for ABC. We enjoyed the much-appreciated ride. We thank Bob and depart with a very special gift — his taped radio broadcast of my Olympic 10,000 meter race.

It’s the 22nd of October and with my Olympic races behind me, I confirm transportation for Pat and I to the airport for the morning of October 25, 1964 with the USOC motor pool. With that confirmed, we enthusiastically embrace a very hectic sightseeing schedule.

We enjoyed a ride on the Shinkansen (bullet train), the most advanced high-speed train in the world. Pat enjoyed our trip to Tachikawa Air Force Base outside of Tokyo. She fell in love with the Fukagawa hand printed china. It was our major purchase during the games.

It is October 24th and the Olympic closing ceremonies are about to begin. Since Patricia and I leave Tokyo for California tomorrow and I am still recovering from my hypoglycemic episode, we are staying in our room at the Palace Hotel. Just relaxing is so welcome.

It is the morning of October 25, 1964. We are in the lobby waiting for our ride to the airport. The car is late. I call the USOC motor pool. I am told all the cars are being used by the officials to sightsee. We must find our own ride. 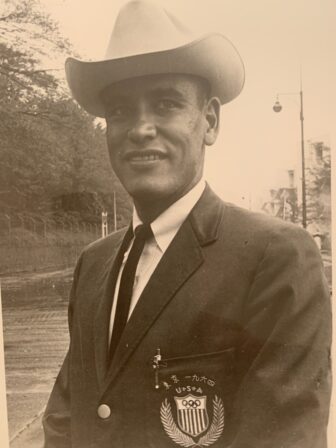 Standing near me is a gentleman who recognized me. Speaking English, he says he overheard my conversation and is concerned. He identifies himself as being with the Japanese Olympic committee. Within ten minutes, a beautiful black limousine arrives. It has the Japanese flag and an Olympic flag on the front. On the back is the USA flag and an Olympic flag. With two motorcycles leading the way, we depart for the airport.

Settled in our seats, the plane is ready for takeoff. The nostalgia begins. It started like a gentle breeze, like the taxiing of our airplane. Then, as if synchronized with our lift off, it became a power overwhelming me and challenging my total being emotionally, physically and spiritually. It was a sacredness of humanity telling me I must have my Lakota giveaway, to give back in honor of those who have given to me for we are all related. It is our way!

Relaxing after lift-off, Patricia says, “You have been in deep thought.” Replying “Yes”, we lock arms. With her head resting on my shoulder, we look at each other simultaneously saying, “I miss Christy!” 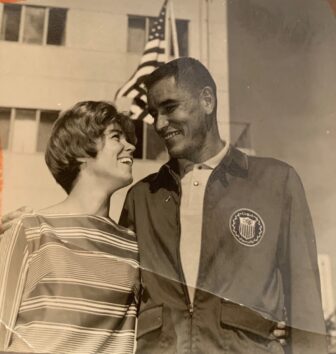