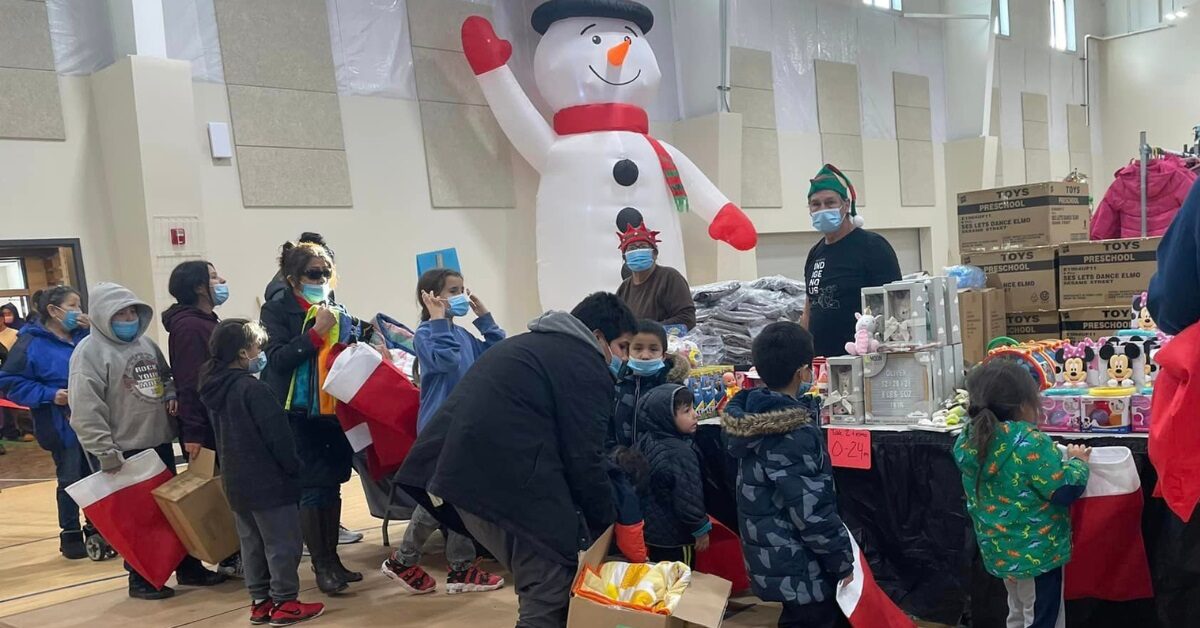 This Christmas holiday, nothing was going to prevent the staff at the Oyate Teca Project on the Pine Ridge Indian Reservation on the Great Plains of South Dakota from ensuring that “Santa” would arrive – albeit eventually – bringing thousands of toys for children despite fierce winds and frigid temperatures.

In the days before Christmas, Oyate Teca “elves” were working diligently through the blizzard to prepare the brand-new Oyate Ta Kola Ku Community Center for the distribution of holiday hams and food boxes on December 21 to make sure that Pine Ridge families could have a festive meal with their relatives and friends on Christmas Day, reported Oyate Teca executive director Rose Fraser.

However, following the food distribution of 672 hams and food boxes from Running Strong for American Indian Youth®, Rose posted on its Facebook page that Oyate Teca’s gift distribution event had to be postponed until after Christmas Day due to deep snow and severe winter weather conditions which prevented travel on the reservation.

“We don’t want anyone out during the freezing temperatures this week,” she posted on December 19.

While hundreds of excited children had to be patient, their patience was rewarded on Tuesday, December 27, when families were able to get out to travel to the community center thanks again to Oyate Teca staff who cleared nearby roads.

At 2 p.m., the Oyate Ta Kola Ku Community Center opened its doors to an organized frenzy of children selecting from more than 2,400 presents divided up into sections designated for their age and gender, with a little assistance from their parents and Oyate Teca staff and volunteers.

Just minutes after opening, Rose posted, announcing “Thank you to this amazing group of elves for getting everything ready for the Christmas distribution today. It took us four days to get everything out and set up!”

The following day, Rose posted that in less than three hours, 528 people had come through with enough for everyone who showed up.

“There were people from across the reservation, young and old! We want to say thank you for coming and I hope the kiddos had fun picking their own toys.”

Rose also worked to ensure that parents and elders were not left out so included in the gift distribution were blankets, coats and boots which were also given out.

“We want to say thank you to all the mommas, dads and grandparents who came and were able to select a gift for themselves. We try every year to include adults because too often they go without so their children can have a Merry Christmas!”
Although Christmas is over, and the high temperatures this week are rising into the 40s, we know the milder weather isn’t going to stick around for long as the forecast for early next week is calling for snow showers and temperatures on Pine Ridge dropping into the single digits with a wind chill factor below zero.
And as we enter a new year, we at Running Strong are assessing resources to determine whether an emergency response from us will be required to ensure that no family goes without heat (before our Heat Match program begins next month) or food if they are once again stuck in their remote homes for days on end.