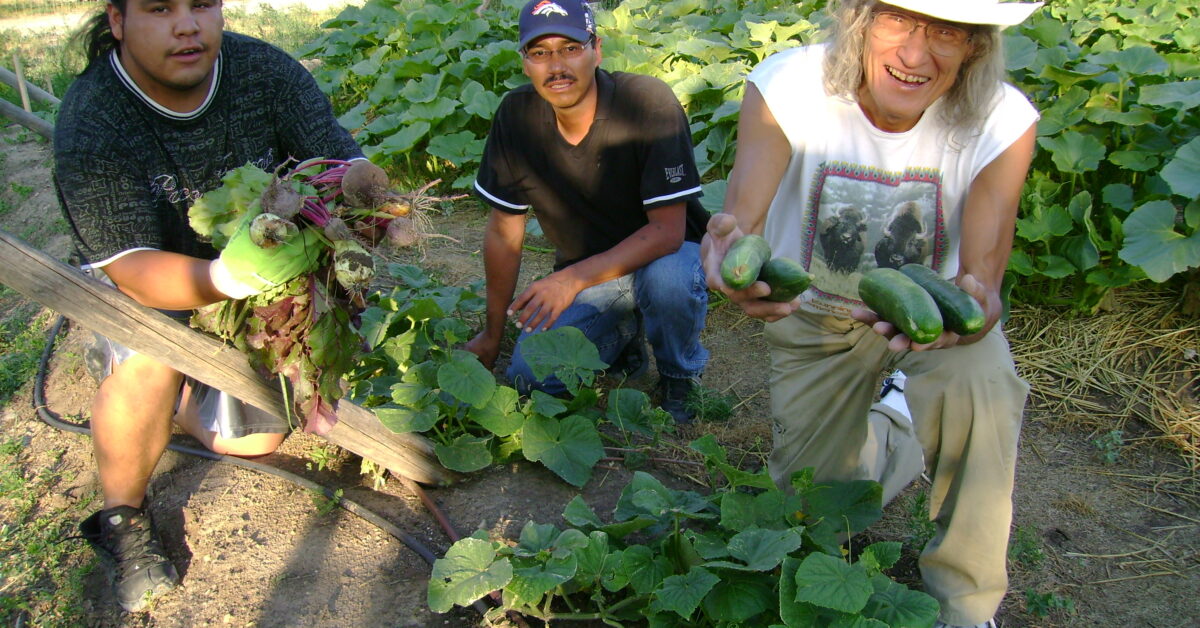 For more than 35 years, Slim Buttes Agriculture has been assisting families on the Pine Ridge Indian Reservation on the Great Plains of South Dakota establish their own gardens, helping to ensure they access to fresh vegetables and fruits grown in their own backyards.

“Slim Buttes Agriculture remains committed to helping home gardeners despite the obstacles,” says SBAG Executive Director Thomas Cook. “Its success through decades has been due to the self-determined desire of the people to help themselves by gardening, and has been strengthened by focus on the spiritual foundations of their thinking. 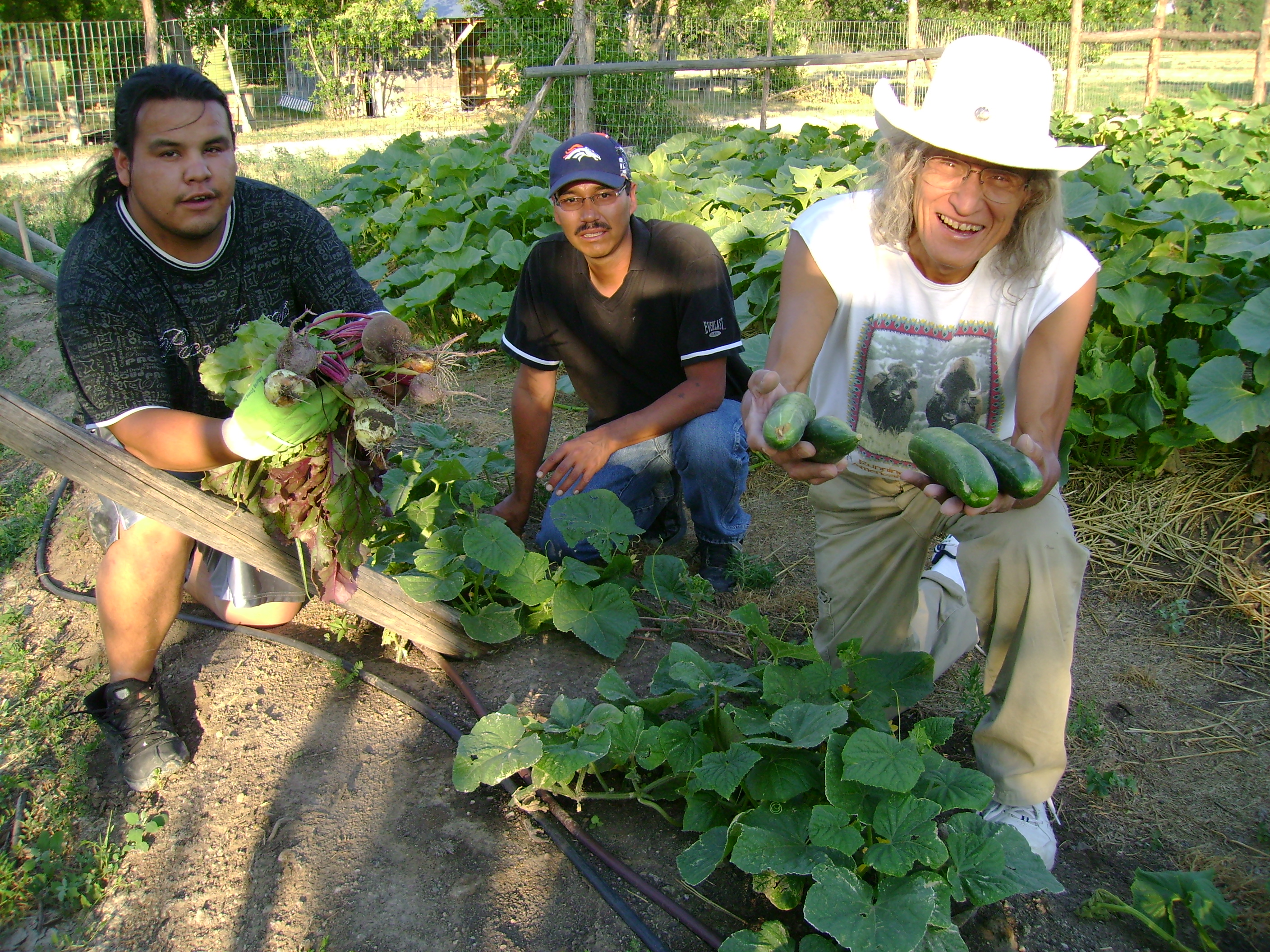 “The program increases access to live foods, combats food insecurity, and furthers the self-development of the people by providing appropriate assistance to the families where they live.”

SBAG Field Director Milo Yellow Hair, who hosts a radio gardening program on Monday mornings on the local radio station serving the reservation, KILI Radio 90.1 (also available nationwide on the internet), notes that, “SBAG, at its core, is a food production entity with major investment in the daily life of Oglala Lakota families.”

In 2020, Milo reported that the year “began in the usual way. February is the time for planning and inventory” with organic and heirloom seeds ordered and by March 8,000 seedlings were readied in SBAG’s greenhouse.

“The next event commences with the center of all we do: prayer. Chief Joe American Horse does the honors and the work begins – 2,500 trays were loaded and moistened, creating the seedbeds.”

Among the seeds started are a variety of tomatoes including Brandywines, Rutgers and cherry, peppers (sweet and hot), onions and cilantro “because these are the basic makeup of the ‘salsa’ that people like to eat.”

All was going as planned on the reservation, but, “Meanwhile, the news from the East was not good, and it has a name – coronavirus.”

By early April, the Oglala Sioux Tribe president had ordered a lockdown and travel restrictions were implemented.

But thankfully, the tribal council had deemed who would become essential workers “and luckily for SBAG that included food production.

“Thanks to our radio show and the fact that SBAG has a 35-year-history of bringing gardens to the reservation, we were able to be declared essential,” said Milo.

Of course, major adjustments were needed to be made and “social distancing and face masks became part of everyday life, while at the base camp we were isolated.

“However, the realization of food security brought many visitors to us,” he reported. “Among the rank and file of Lakota, gardening became the word of the day!”

The result was 7,500 seedlings went out the door, and the demand for seeds increased – including those for traditional Oglala Lakota foods such as chokecherries and buffaloberries.

And right now, one year later, Tom, Milo and the crew are hard at it again working to meet the gardening and food security needs of the people on Pine Ridge.

As Tom notes, “The continuing reservation lock-down attending the pandemic opens prime opportunities for people to plant and tend gardens at the homes, plant trees and get needed exercise.”

Thanks to the supporters of Running Strong for American Indian Youth®– especially one anonymous generous and loyal donor who has provided a $5,000 matching grant for our garden match campaign for SBAG for the past many years – Tom projects that SBAG will help 200 families (at a minimum) to plant gardens this spring and supplied with seeds and 8,000 seedlings following the last frost of the season in May.

As Milo hosts his radio program, ‘Wojub Oyanke’ (Talking of Things Growing), through the end of May, applications for assistance have already begun to swell as he focuses his discussions on gardening on the importance of fresh foods, the ways and methods of growing and the congruency of “Biodynamic” gardening methods with “thinking in Indian” as the appropriate means of maintaining soil life and plant health.

“We focus on garden set-up and supply,” says Tom. “SBAG is widely known for its frontline advocacy, community education, direct action against the disconnection of people from their lands, and for its foundation on cultural norms, ceremonial usages, and the Lakota language.

“Through the decades, SBAG has operated without tribal for federal support, but with the assistance of several organizations, primarily Running Strong for American Indian Youth®.”

And Tom notes, right now, Oglala Lakota County is considered to be the third-poorest census tract of 3,147 counties in the United States.

“It’s a population vulnerable and in need of help such as SBAG has provided for more than three decades.

“The chaos, sadness and stresses people have suffered through the past year have not abated,” adds Tom. “Hopefully, 2021 will be better.”