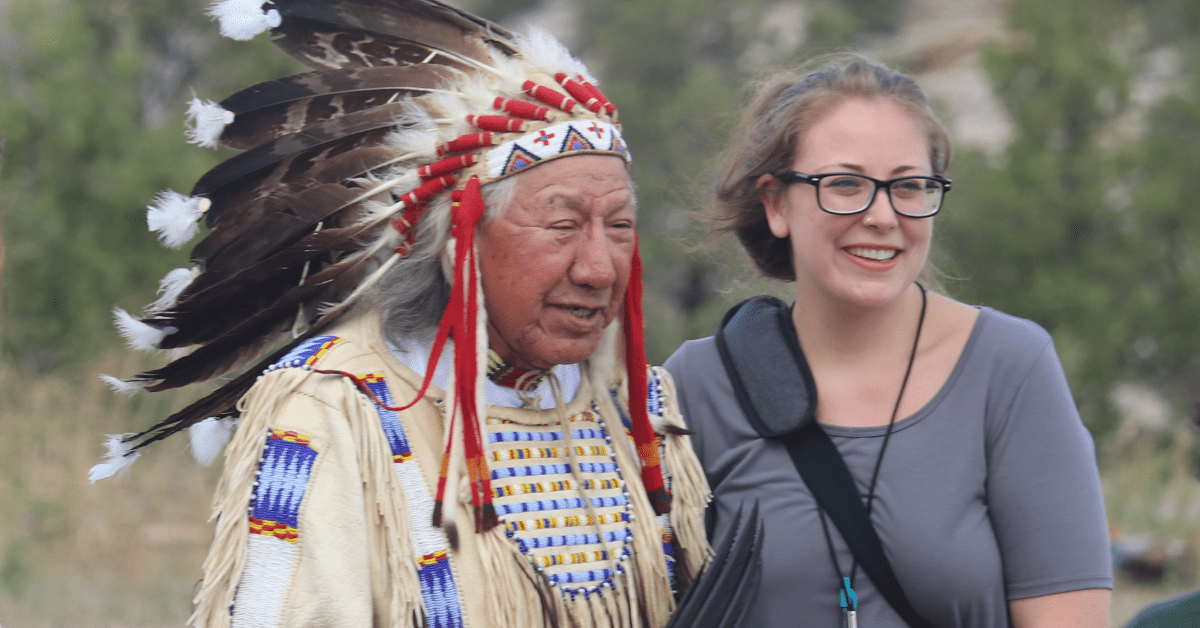 Sydney is a member of the Oglala Lakota Tribe grew up in Sacramento, California. She received her bachelor’s degree in Psychology from the University of California, Santa Cruz and has over 10 years’ experience in domestic and international non-profit management, program development, and fundraising. She is dedicated to community-led development and maintaining organizational transparency, and her passion for her Lakota culture and creating an equitable, inclusive society for Native Americans is reflected in her work.

Sydney began her career at Running Strong nearly five years ago in June 2017 as a Program Assistant and quickly rose through the ranks serving as Program Coordinator and Deputy Director before being named Executive Director this month.

Throughout her tenure at Running Strong, Sydney has remained committed to centering Indigenous voices in developing and operating Running Strong’s many programs. As Deputy Director, she steered Dreamstarter® program, which empowers Native youth to make their dreams come true though a $10,000 grant and hands-on mentorship.

Sydney co-founded Running Strong’s Intertribal Creatives, an initiative designed to support Native artists and to celebrate Native cultures, overseeing its strategic planning and daily operations. In 2020 alone, she was responsible for distributing more than $1 million worth of critical COVID-19 relief food and supplies to more than two dozen Native communities. She has been prepared and mentored to take on this new and expanded role as Executive Director.

While the Board of Directors and staff at Running Strong are proud to have Sydney taking the helm, there are no others prouder than her grandparents, Running Strong co-founder and Olympic gold medalist Billy Mills and his wife, Patricia.

“Our Oyate is proud to announce our granddaughter Sydney Mills Farhang has been appointed as Executive Director of Running Strong for American Indian Youth®,” stated her proud granddad on his Facebook page. “We are in good hands folks! Excited for the future of Running Strong. Congratulations Sydney!”

Billy went on to note how his father told him age the young age of 9 to always have respect for women as it is “our women who saved our culture, traditions and spirituality so our ways can be passed onto future generations.”

“Another young Indigenous female to make a difference in today’s world is the new and first Indigenous person to become Executive Director of Running Strong for American Indian Youth®. It is extra special that she a Lakota woman and tribal member.”

“I have been raised by Lakota women and they continue to inspire and challenge me to be a better person. This includes the new Executive Director of Running Strong for American Indian Youth®, my granddaughter, Sydney Mills Farhang.”

“I am incredibly proud of the way Running Strong is helping to strengthen the next generation of Native leaders: food sovereignty and security, access to clean water, pride in being Indigenous and speaking our languages, and an incredible network of emerging leaders who support and challenge each other,” says Sydney.

Running Strong for American Indian Youth® is committed to continuing our mission to build the capacity of Native American communities to meet their needs and secure a happy, healthy future. To learn more about our programs visit the Running Strong site at www.indianyouth.org or contact madeleine@indianyouth.org