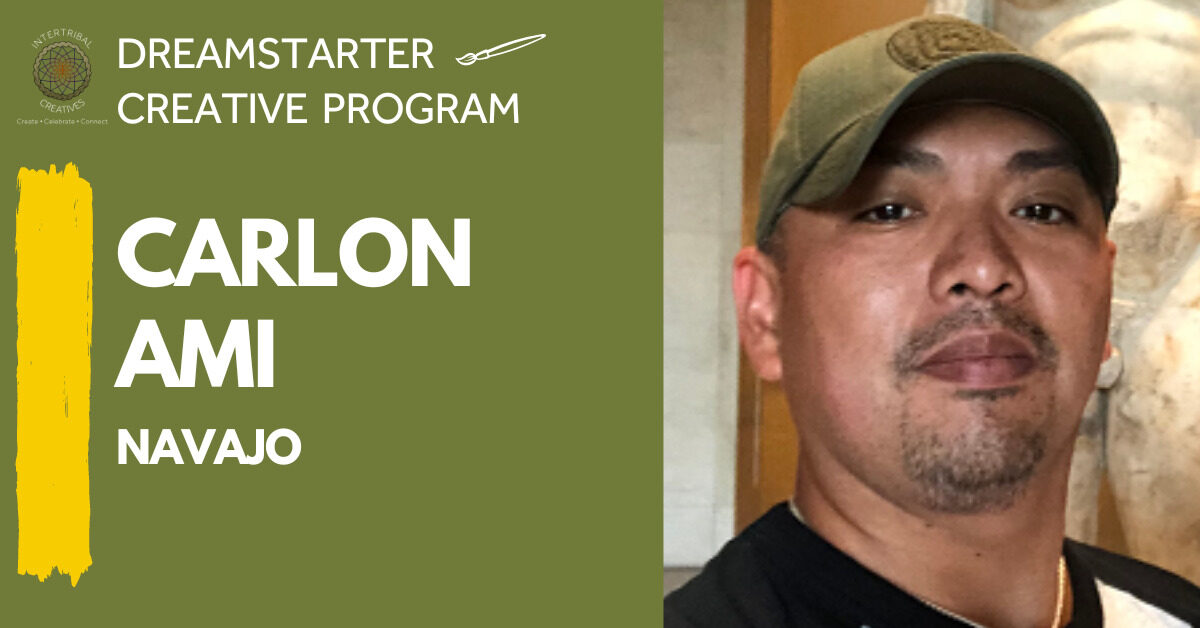 Running Strong for American Indian Youth® Dreamstarter Creative Carlon Ami (Navajo) of Tsaile, Arizona, had told us in his grant application that his favorite medium is to work with silver and stone “primarily due to the cultural relevance of jewelry not only as a personal adornment, but from a spiritual perspective.”

With his $2,500 Dreamstarter Creative, Carlon was able to work on his project, “Reimagining Ingot Silver” to invest in tools and materials that supported his work, not just for the length of the grant period, “but far into my future career.”

Carlon explained how his project transformed from the point of initial proposal to completion.

“Initially, I intended to utilize commercially processed sheets of silver but decided to shift the project to the use of and processing of ingot silver.

“This transition is the first major accomplishment of the project.”

Carlon commented that the evolution of the project to the processing of silver ingoted injected “a distinct historical component to the production of silver jewelry.

“This transition takes the base of the project back to the initial introduction of silver work to the American Southwest in the 19th century and introduces the idea of silver as intermediary and documentary of the colonization process.”

He also detailed how during the course of the project he was able to teach himself about ingot casting and the rolling process.

“There was a tremendous amount of failures and time spent at this stage, but I was able to find a way to make it work and successfully process enough ingots to build a full First Phase style concho belt.

“Most importantly,” Carlon added, “my sons are interested in my work and can’t wait to start their own. My studio space is in a shed in the back yard and when they play, they constantly come in to watch me work.

“They ask questions and want to know what tools accomplish which tasks. They sit there for as long as their attention span can handle and watch me work.”

And on top of that, “My oldest son just started kindergarten and told his teacher that his favorite thing to do is paint and make art. When I get back from the Santa Fe Indian Market, I am going to set up a little easel for him right next to mine.”

Carlon said the primary means by which he evaluated the success of his Dreamstarter Creative project “was through knowledge and processes learned.”

He acknowledged that that while he could have produced “much more” if he had simply utilized the processes he was already familiar with, he decided that “developing more advanced skills was a higher priority than large scale production.

“I can honestly say that I would never have had the resources or the time to learn to process silver in the manner I did if I did not receive this grant.”

Carlon noted that while he had already known how cast in tufa stone (a compressed volcanic ash material that is found on the Navajo Reservation. Tufa casting is a labor-intensive process involving many steps.), but he had never cast ingots in an ingot mold.

“This resulted in quite a bit of stress when attempting to pour solid, quality ingots.”

He also commented that he was not prepared for the amount of time and physical effort required to create jewelry in this method.

“It was an incredibly intense process, both mentally and physically. This struggle is something that we often take for granted when seeing these items in museums or galleries, I am glad that I got to experience a very small part of that. I will never take my modern tools for granted again.”

Carlon, who will complete his BFA (Bachelor of Fine Arts) degree in Navajo Silversmithing in May and hopes to begin a MFA in the fall, said that in addition to his dream passing on to his sons these skills, he also has a clear path for how he intends to share his knowledge with his community. Eventually, he hopes teach art at the high school or college level.

“My family infused me with cultural knowledge my entire life. I have been actively pursuing instruction in the fine arts for years now,” he said. “I want to bring these two realms of instruction together.”

And just as he was completing his Dreamstarter Creative grant project, he told us “I saw the initial stages of this goal come to fruition as I guided five students to the completion of simple silver bracelets in a weekend workshop hosted by the Navajo Cultural Arts Program.

“Everybody returned to their homes happy and just a little bit more knowledgeable.”

In sum, Carlon says, “Working on my art stimulates not only my own memories of ceremony but serves as a catalyst for inter-generational conversations of teachings and values.

“I hope that viewing my work will encourage inter-generational conversations in both the Hopi and Navajo communities I call home.

“I want my grandchildren to see my work and remember our history, culture and values.”