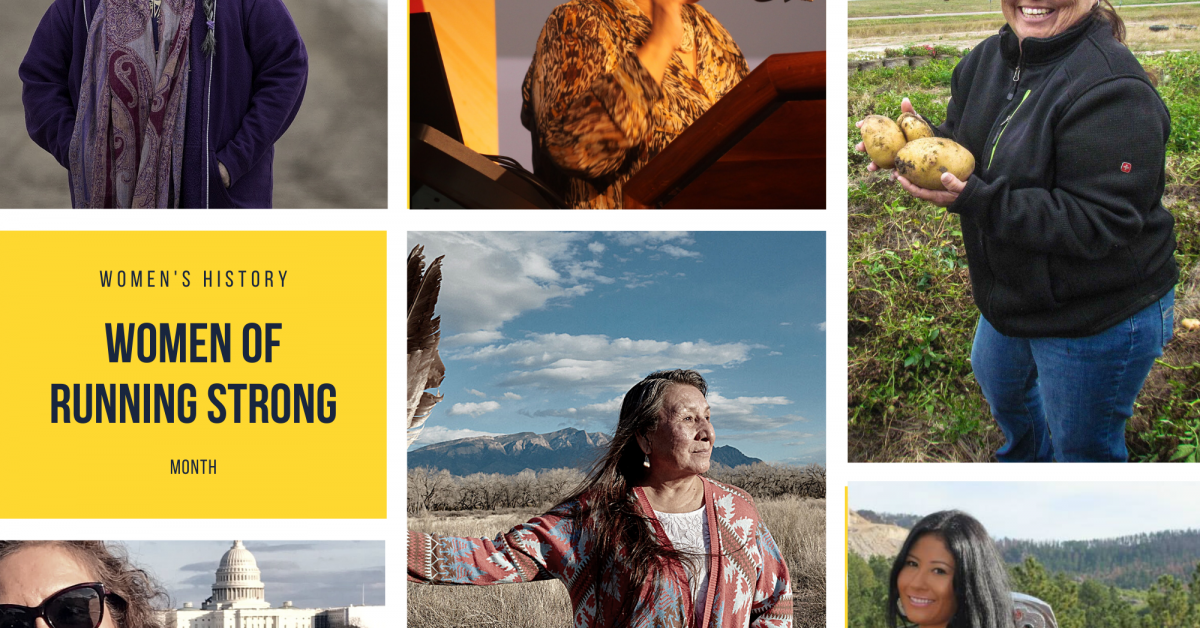 After a Prolonged Winter, Heat Match is Completed

Through Running Strong’s Heat Match Program Pine Ridge residents are eligible to receive a dollar-for-dollar match of up to $100 to go towards paying for their propane tanks to be filled or applied towards their electric bill. Running Strong coordinates with three local energy vendors to make the match possible each year.

This year, through a generous donation by Cerner Corporation, Running Strong announced the Veterans Heat Match program, which matches $50 of a Veteran household for $100 of Running Strong funds. Native Americans serve at five times the national rate of any other population, and are among America’s most valued members. When the particularly prolonged and brutal winter hit Pine Ridge this year, we knew this service would be greatly appreciated among our retired service members and their households.

In 2021, more than 800 Pine Ridge Indian Reservation families were served through the Heat Match, including 64 veterans whose backgrounds included Army, Navy, Air Force, Marines, and National Guard. The Match was originally scheduled to run from January 11 to February 26, but a late winter snowstorm prompted Ken Lone Elk to extend the match to March 19.

“We received enough snow from one of our famous Spring storms to close the Lakota Nation down for 2 working days,” Ken said. “I think we were the only ones with the police and ambulance service still working.”

“Because of the comments and calls received, I think it is in the best interest of our office to assist the public for another couple weeks and this will give us time to call more Vets about our offer… the families are starting to feel the crunch now.”

Lone Elk describes the Heat Match as “a little helping hand after the holidays,” which it is. But it’s also much more, it’s a program that literally saves lives and keeps families from being forced to make the impossible choice of putting food on the table, keeping a roof over their head, or staying warm inside when the wind-chill factor is 30 below outside.

In a historic first for America and particularly Native Americans, Secretary Deb Haaland (Pueblo Laguna) will serve in the presidential Cabinet as Secretary of the Interior after the Senate voted to confirm her nomination on March 15.

Upon notice of her much-anticipated confirmation, Billy Mills sent a message of congratulations to Secretary Haaland across social media.

“On behalf of Running Strong for American Indian Youth and myself, I would like to extend my sincerest congratulations to Secretary Debra Haaland for her momentous triumph in being confirmed as our nation’s first Native American Secretary of the Interior. I have great faith in her ability to usher in the changes our nation is longing for. It is especially fitting this landmark occasion happens during Women’s History Month. Our earliest societies were built on the strength of Indigenous women and today it is more true than ever. We continue to see generation after generation of Native women flourish in their sacred role as leaders, and I look forward with an open heart to the horizon of our future Secretary Haaland’s leadership will tend for us.”

Monday, March 22, was World Water Day, but at Running Strong for American Indian Youth® as far as we are concerned every day is “water day” for families on the Pine Ridge Indian Reservation in rural South Dakota.

That’s why providing water, first by the truckload, later by digging deep water wells and currently by connecting families’ homes to the Oglala Sioux Rural Water Supply System water line which runs through the reservation, has always been among our top priorities.

Today, it is estimated that there are between 250 and 400 families whose homes are located within a few hundred feet of the service line but who are still waiting for access to the water they need, which is sadly passing them by.

In the meantime, their daily reality still involves a multi-mile drive to access water for drinking, cooking, bathing and washing at a community source, or walking long distances to their nearest neighbor’s homes to fetch water.

Overcoming water insecurity on the reservation takes enormous dedication and resiliency by Pine Ridge residents in the face of insufficient government pipeline programs and infrastructure.

And with the COVID-19 pandemic still ravaging the reservation, the need has become even more urgent than ever in the past year with the necessity of frequent hand-washing recommendations as among the best ways to prevent the spread of the deadly coronavirus.

We at Running Strong have known for decades that Mni Wiconi (Water is Life) and that’s why we will not stop working to provide water to every family, every child, every elder, until their most basic necessity of life is met. 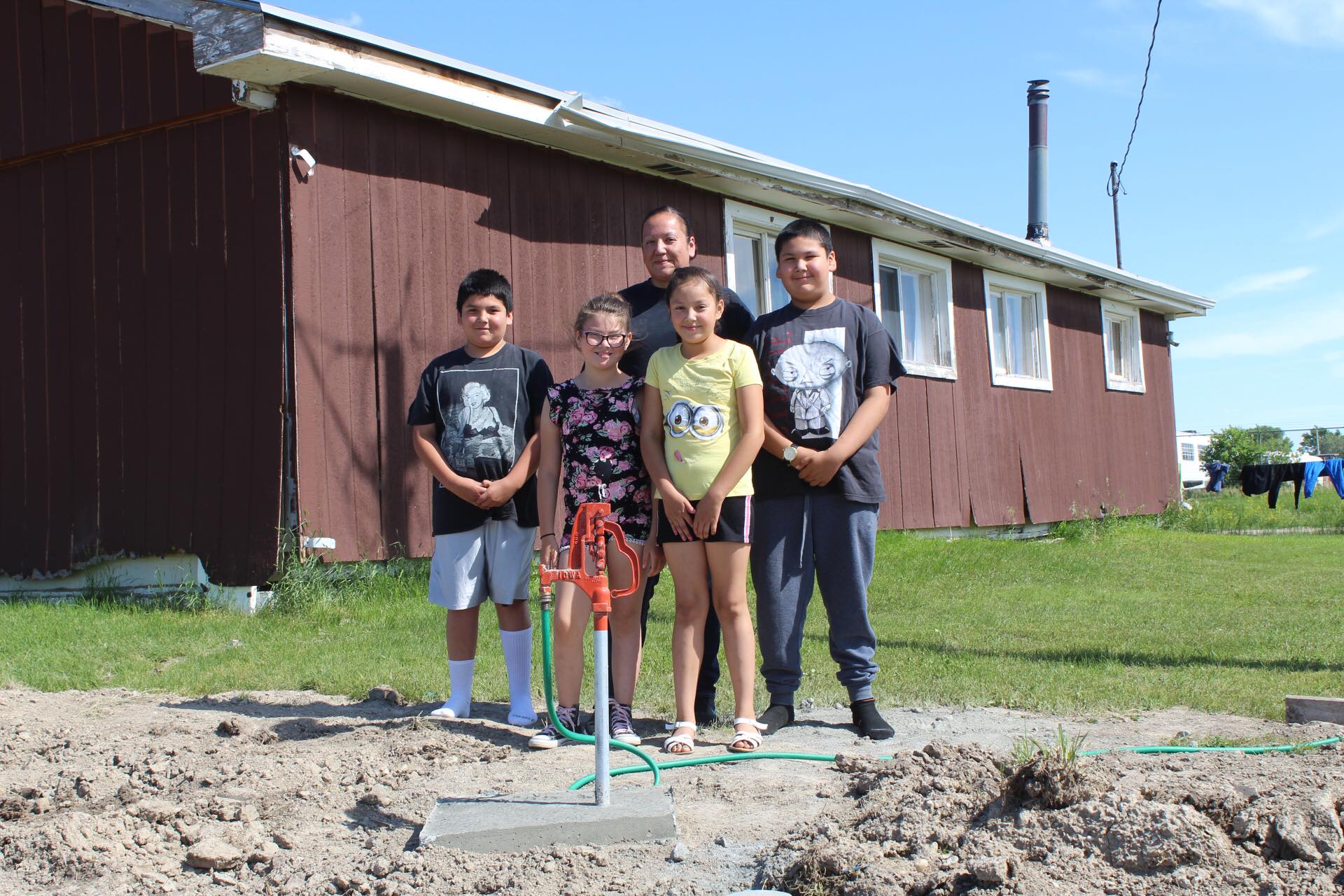 The Pine Ridge Indian Reservation in South Dakota has long been known as what is described as a “food desert” where access to fresh produce is difficult, and expensive and often poor quality when available.

That’s why for decades Running Strong for American Indian Youth® has supported Slim Buttes Agricultural which tills gardens for hundreds of families, and provides them seedlings and support to grow their own vegetables and fruits in their very own backyards.

In addition, we also provide support to our partner, the Oyate Teca Project’s Medicine Root Gardening Program where budding gardeners take classes (virtually for now) beginning in February in preparation of putting seedlings to ground following the last frost of the season in mid-May.

Over the years, thanks to the supporters of Running Strong, we have been able to assist untold thousands on the reservation grow fresh produce for themselves, their families, their neighbors and their fellow tribal members throughout the reservation and gradually continue the overarching mission of transforming the food desert into a garden oasis. 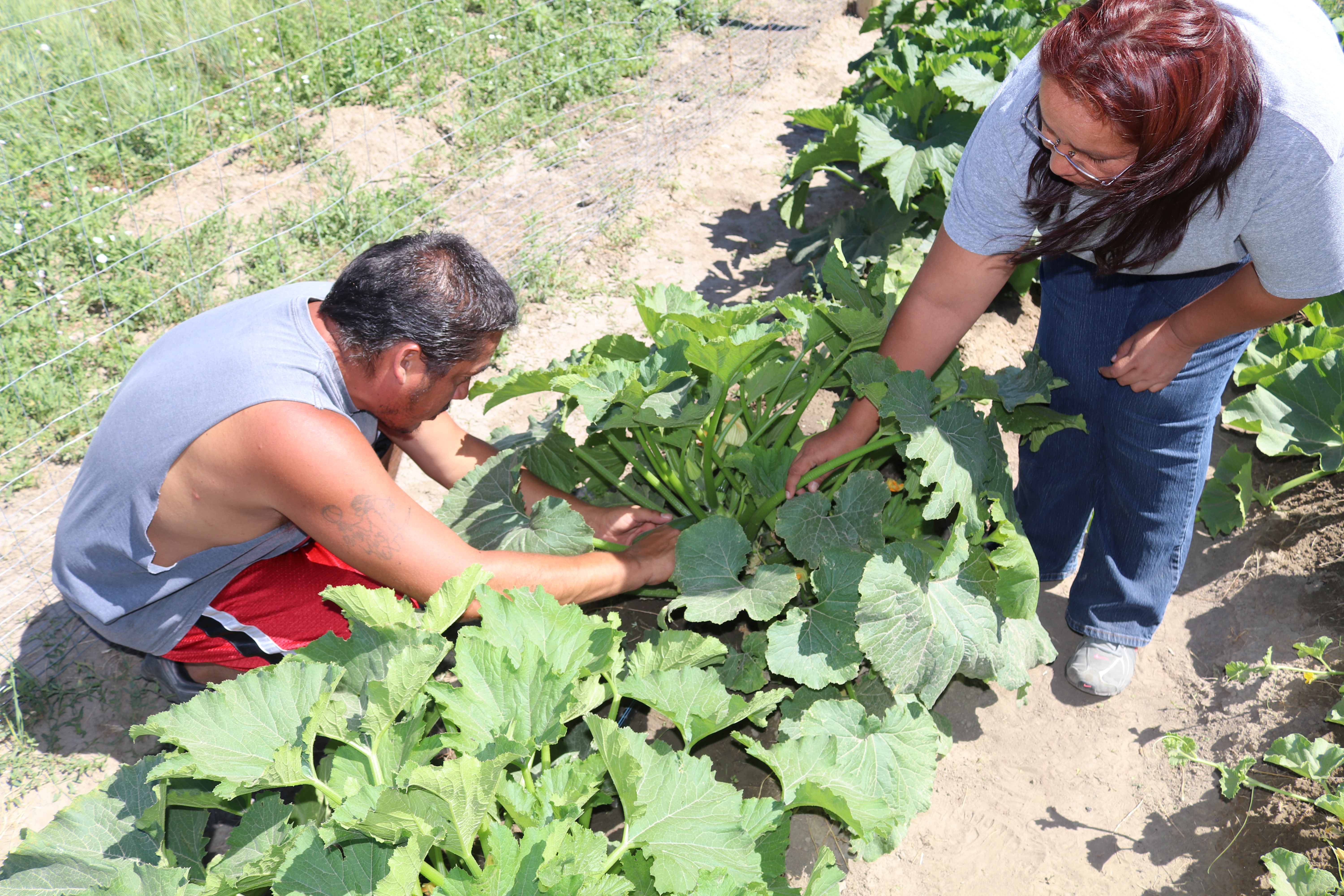 From our earliest days, Running Strong for American Indian Youth® has partnered with Native grassroots organizations led by strong and determined indigenous women throughout Indian County.

Rose Fraser, director of our partner, the Oyate Teca Project on the Pine Ridge Indian Reservation, a member of the Running Strong field staff. In addition to managing its community center where dozens of children show up daily all year long to participate in fun and educational activities where they learn more about their own cultural heritage year-round, she also directs its Medicine Root Gardening Program where Oglala Lakota families learn to grow vegetables and fruits in their own backyards.

Katsi Cook is a former Running Strong board member and Executive Director of the First Environmental Collaborative of Running Strong which supports community-based health projects that seek to empower Native women of all ages. In addition, Katsi is a midwife, environmentalist, Native American rights activist and women’s health advocate.

Loretta Afraid of Bear Cook has a long history of commitment to her Oglala Lakota people on the Pine Ridge Indian Reservation, as well as to Running Strong where she has served on our Advisory Board for many years. In 2016, Loretta made history as part of a delegation of indigenous leaders who formally presented Pope Francis with the “Petition to Revoke the Papal Bulls of Discovery”, a 15th-century decree that became part of the Doctrine of Christian Domination.

Faith Spotted Eagle has made significant improvements in the lives of her fellow members of the Yankton Sioux Nation, and Native American tribal members throughout Indian Country, by attending American University and later earning an MA in Educational Psychology and Counseling from the University of South Dakota. To really make a difference for her people at the local, state and federal levels, she strived to do so from inside government by running for a seat in South Dakota House of Representatives in 2006, placing third in the Democratic Party primary. In the 2016 presidential election, she received one electoral vote for president of the United States, becoming the first Native American to receive an electoral college vote for president.

Rose, Katsi, Loretta and Faith are but a few of the women affiliated with Running Strong who are making a huge difference in the lives of countless Native American children, women, families and elders throughout Indian Country and we are proud to have them by our side in our shared mission. 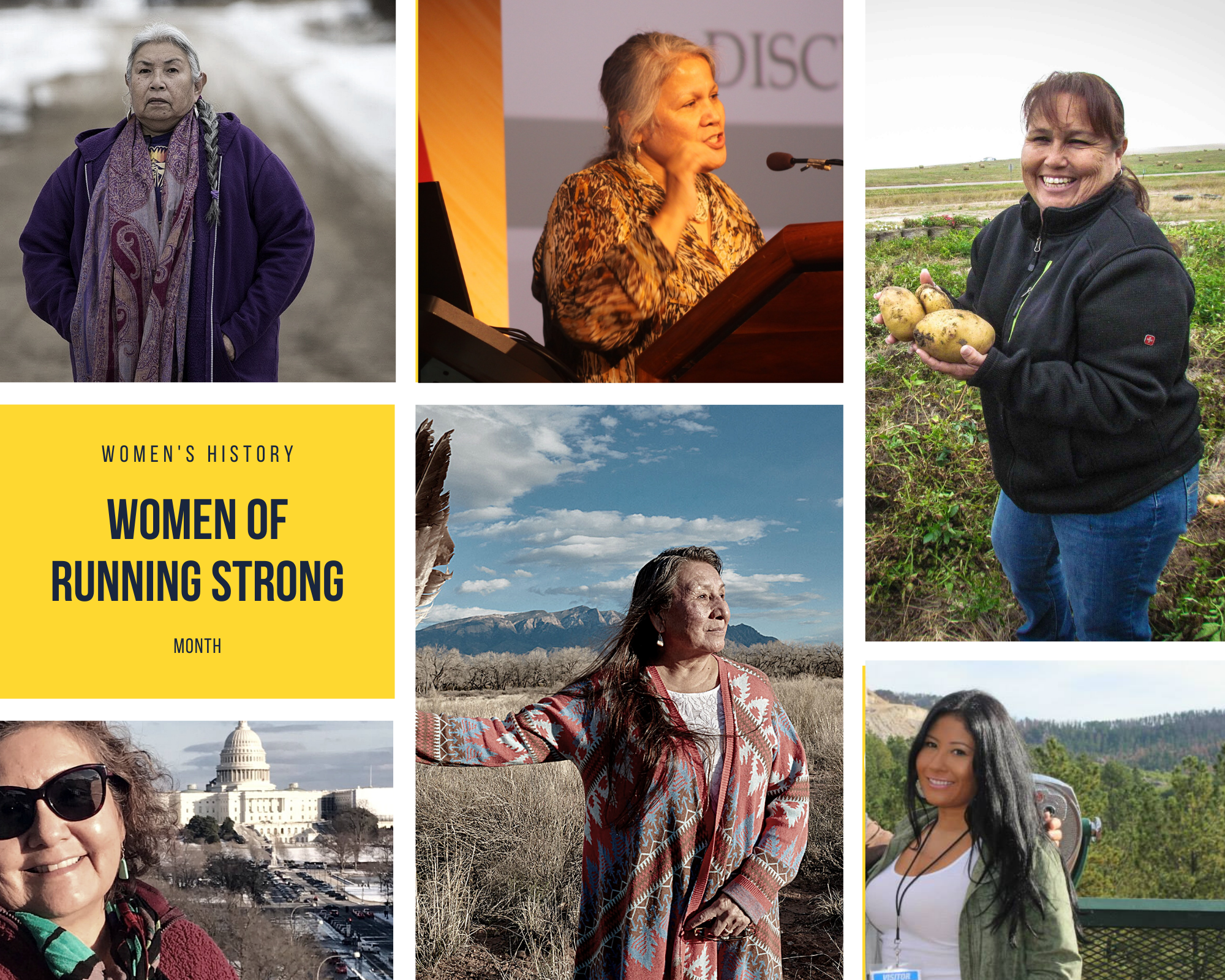